Sachin Tendulkar will play his 200th and final test match tomorrow. That sentence may mean absolutely nothing to you. But then you can consider yourself in a minority, and should read on. When tickets went up online to watch this greatest of all Indian batsman’s swan song, the selling website received 19 million hits within the first hour. NINETEEN MIILLION people inquired after tickets. The ground doesn’t hold that many.

I saw Tendulkar bat 6 or 7 times (that’s me, 5th from left, the tall Indian bloke with the moustache) and, true to form, never saw him make more than 45. I think I’m his jinx. Perhaps the England team should have taken me with him to India every time they went on tour ? God knows I’ve written and asked them enough.

Whether we like it or not, Indian Cricket— and its governing body, the much-loved, virtuous, high-minded and incorruptible BCCI— is the driving force of the world game. The numbers just stack up against all else: Revenue and fan base for starters make other nations’ figures dwindle into insignificance. It’s difficult to put an exact figure on the audience in the sub-continent, but if you said 800 million people watch the game, you wouldn’t be a million miles away.

If the Poms and the Aussies think the world is anxiously awaiting another in a rather irritating extended run of Ashes Test matches, they might think again. The cricketing world at large is on the edge of its seat expectantly anticipating the last walk to the crease by this little man on his home ground in Mubai, desperate for him to do well.

In a nation increasingly force-fed the monotony & banality of Twenty20 Franchise Tournaments, served up on dirt-brown platters of lifeless wickets, it is somehow refreshing to know there is still interest in the longer form of the game — even if it is a one-off to recognise one of the greats. And while an ever-growing number of our sporting idols are being exposed as at best, cynics, at worst cheats, it’s been great to watch this man go about his business, not just brilliantly, but honestly, humbly and often with a smile on his face.

And as India is a country obsessed with stats, and cricket is a game which thrives off them, it’s worth having a quick butchers at a few numbers and quotes surrounding Sachin Ramesh Tendulkar:

England Coach Andy Flower: “There are 2 kind of batsmen in the world. 1: Sachin Tendulkar. 2: all the others.”

Shane Warne: “Sachin Tendulkar is, in my time, the best player without a doubt — daylight 2nd, Brian Lara 3rd.”

First batsman to hit a double-century in ODI cricket as he scored an unbeaten 200 against South Africa in Gwailor, February 2010.

President Barack Obama “I don’t know about cricket but still I watch cricket to see Sachin play. Not because I love his play but because I want to know the reason why my country’s production goes down by 5 per cent when he’s in batting.”

Numbers of fellow pros who have a bad word to say about him: 0

Many congratulations to Mr Willie Eckerslike of Staines for the winning entry to the recent caption competition. For his winning effort of “If they go above my head, can they be called wide ?”) Mr Eckerslike wins for himself a pair of Anti-Pervert Hairy stockings (as reported by The Daily Telegraph), Several plastic OBEs, a drip-dry statue of Jane Mansfield and a ticket to Hampstead Fairground.

And now, as it’s that time of year again when the English, traditionally, exit a major tournament, here are some random cricket images:

The Australian Touring Party to England 2013. Not sure who the geezer front right is, don’t think he made the trip. The two fellas wearing the pink scarves are currently in the nets, awaiting confirmation of Australian citizenship. ACB hope they’ll be available by the Third Test. (D.A.Warner is out of shot, beating up the co-pilot.)

M.A.Holding hears that no-one’s switched on the urn in the pavilion.

Best Performance in a Leading Roll (in a Foreign Comedy)

In a tightly contested race, the award of biggest comedian on show yesterday went to the French No.10 Frédéric Michalak for his near perfect portrayal of an explosion in an idiot factory during an amateur production of Les Miserables in Paris last night. Michelak, although easily carrying off the award (while trying not to drop it), had to fight off some pretty strong competition, notably from the likes of The Stade de France groundsman, Monsieur Herbe du Somme; Scotland’s own Jim Hamilton for Sunday Morning Lummox —his harrowing portrayal of a 1974 ExB Lock Forward with a forearm smash addiction; and Luciano Orquera, the Italian Outside-Half for his reprise of the Daniel Day Lewis‘s role from My Left Foot.

But in the end the award rightly went to Michelak for possibly the most embarrassing display by an old man on a sports field since Muhammed Ali ‘fought’ Trevor Berbick or Henry Leconte stopped his ‘zany’ antics on the ATP veterans tour. Michelak, of course, even in his prime could never be accused of having been an Ali, but yesterday many french rugby fans were heard to dub him “Leconte”. Or something like that.

The 30 year of from the south of France (born Toulouse 1982) is also in the running for Worst Director of 14 Other Men, and The Academy‘s honorary Do Us All a Favour and Hang Up Your Boots Award (colloquially known as The Warnie), but has been withdrawn from circulation until further notice, having been found to contain at least 90% donkey.

(Yes yes yes, it’s cricket again – but you’ll like this one)

I think if I ever had to face an Australian fast bowler I’d ask for a blindfold. ‘England’ batsmen Kevin Pietersen has a go at facing a bowling machine, cranked up to serious speeds. He’s pretty good at it. Perhaps that’s the answer, KP ? 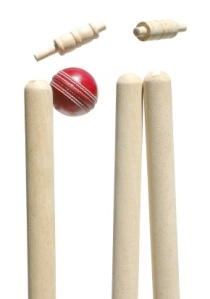