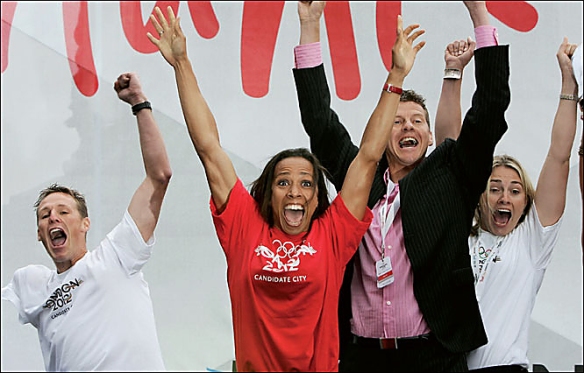 Nearly there. Not long to go now. One final push and the whole sodding year will be over and done with and we can forget it ever happened. I’m sure you lot have had a better go at it than I did, but, to paraphrase a good mate of mine, you can stick 2011 up your arse. Not that you needed a stroke-and-a-half to have hated this year, but it didn’t help me, I can tell you.

For those of you whose head hasn’t popped off this year, the economy, the housing market, the job market, Gideon Osborne, Nick Clegg, the Royal Wedding, the Arab Spring, a little war in Libya, a proper war in Croydon, Downturn Abbey,  and Jeremy Clarkson will still mark this as one of the more miserable years since at least 2010.

Sadly, there are still ten days left for the all-powerful being to chuck us a couple of bouncers before the year’s properly out. Take the poor old sod who showed up driving Boris’s new bus the other day. The Mayor of London unveiled his new double-decker costing (and wait for it) £7.8million for five (count ’em) FIVE buses. Good job there’s not a recession going on. That’s one and a half million quid for a bus. And guess what ? Fucking thing broke down on its first run out. Yep. The battery failed on its trial run. Here’s a photo of it stranded on the hard shoulder of the M1.

Now, admittedly, as debut disasters go it’s not exactly Titanic-esque, but one suspects that both Boris and Mr Bus Driver would have uttered a quiet “oh fuck-it” under their breath. Is it just me or did that bus look remarkably similar to the one that Beckham rode around the Chinese Olympic Stadium ? The one which Leona Lewis held tightly between her titanic thighs as she sung along triumphantly with Jimmy Page to a Chas ‘n’ Dave medley (I’m not making much of this up) at the closing ceremony of the Peking Games ? No wonder it broke down.

Talking of the Titanic, next year sees the 100th Anniversary of its fateful maiden voyage so gird your loins for dozens of BBC4 documentaries on the trip, at least three of them featuring hysterical historical father-and-son team Dan and John Snow revisiting the scene in a midget submarine and reliving the tragic tale of the unsinkable ship. It’d certainly be par for the course, and both of them are more attractive to look at than watching fatty Winslet hanging over the railings being goosed by someone from steerage.

Channel 4 will probably dig up a victim of the sinking and dissect him, for reasons known only to those that decree that each and every Channel 4 documentary demands at least one autopsy .

2012 also happens to be the 100th Anniversary of plucky British explorer Robert Falcon Scott‘s demise on the return leg from the South Pole, having months earlier found that Norway’s Roald Amundsen had beaten him to his goal. The Norwegian PM even spent time at the pole a couple of weeks ago, experiencing what his great countryman experienced on becoming the first man to the very bottom of the world. My letter to the British PM and his Chancellor suggesting they might like to mark the Titanic Anniversary by reenacting the journey, complete with realistic (well…real) ice fields seems to have been delayed in the Christmas post. I’m gonna email them in a minute.

So bring on 2012. We do, of course, have the excitement and pageantry of the Queen’s Jubilee and Lord Coe‘s Fucking Olympiad (that’s now the official title, by the way) to look forward to. As you may well imagine, I am keenly anticipating them both equally. but that can wait for another time. Just to say that if you came from a country that brought you Scott of the Antarctic, Titanic, the Dunkirk disaster Royal It’s a Knockout, and many many more, you’d be looking forward to them too. Better sharpen me pencils.

There are things you just know.

During your lifetime you pick up knowledge. Stuff that is just true and there’s no row about it. You know it’s true because, not only did mum and dad tell you, your teachers told you, the tv news told you and even Hollywood told you. Stuff like “all scousers are funny”; “all cockneys are the salt of the earth (they only slaughter their own)”; “all trombone players wear sandals”; and of course “all welshmen can sing and would never ever intend to break your neck on the rugby field because they’re nice blokes and just not like that”.

These are the sort of rules, the kind of guiding principles which allow you to steer your ship of life between the shifting sands of the Bay of Uncertainty and the hard, jagged rocks of  the inlet of Oh Fuck it’s Really Happening. It’s now 47 years since people started telling me stuff. I stopped listening to most of them some years ago. Like Homer, there’s only so much I can fit into my brain before something else gets pushed out. The ravages of age, a stroke, and a life of heavy drinking, along with the distraction of the oncoming steam train of certain Alzheimer’s  severely limits the amount of new information I can take on board. Or as Terry Pratchett might put it, I’m fucked in the ‘ead.

So imagine the confusion it causes one so fragile as me, when stuff you just know is fact turns out to be untrue, at least for the sake of selling a few books at Christmas time.

Adolf Hitler and Eva Braun didn’t take their own lives, shortly after making a few dodgy videos for YouTube. Not according to the  new book Grey Wolf: The Escape of Adolf Hitler they didn’t. No, they fled to Argentina, aided and abetted by the Yanks in exchange for Nazi rocket scientists and the information within. According to a report in this week’s The Daily Mail (and who among us could argue with them ?) Mr& Mrs Hitler legged it through Europe and escaped across the sea to South America, presumably free to go on the piss with their chums Josef Mengele, Adolf Eichmann and countless other Nazis we let get away after 1945. The couple brought up their two kids, at some stage divorced, and Mr Hilter (as he then was) finally threw a seven in 1962 at the grand old age of 73.

The Russians claim they captured what was left of the Hitlers from a bunker in Berlin in 1945. What they apparently have are the charred remains of a early version of a McDonalds Breakfast Wrap (Another Fact: These are horrible. Keep away from them and go for the Double Sausage McMuffin.) 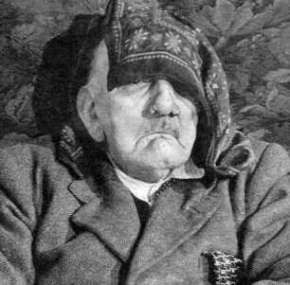 It’s a good job Vincent Van Gogh isn’t alive today. He’d be forced to go to Gateshead (up in the frozen North somewhere) where this year’s The Emperor’s New Clothes Prize has been moved to. Presumably Londoners have finally given up pretending that “Pile of Shite in Aspic” is art, and the organisers have decided to move to the Third World in search of new mugs to jump on the “oh-but-you-dont-understand-what-art-is” bandwagon. Howay.

The aforementioned Vincent is no longer with us, of course, having topped himself in a wheat field in 1890 in northern France.

The Kirk Douglas look-a-like was shot by a couple of brothers in a dispute over a stolen pistol. We know this from the new book imaginatively entitled Van Gogh: The Life (available at all good bookshops, makes the perfect gift). In their book the two American authors trash the widely-held belief that the absinthe-riddled, ginger paintist, having reached the end of his tether with a lack of sales and Anthony Quinn’s acting, took himself off and fell on his own pallet knife. (Sadly for me they make no mention of the time Gauguin asked Vincent if he’d like another canvas. “No thanks, I’ve got one ear”  Van Gogh replied. As the book doesn’t mention this, I now know it to be true.)

The fact that he was shot by a young boy, and didn’t just succumb to the inner-demons of the mad genius that he was has not only rocked the art world, with the sky-high prices of Van Gogh’s work potentially under threat (nutcases sell for more) but worse, Don McLean is having to rewrite one of his songs.

This morning the descendents of Robert Falcon Scott‘s fateful expedition to the South Pole have joined in the campaign to diss everything I thought I knew about everything. There’s a new exhibition in town showing many images, some not seen before, by the trip’s snapper Herbert Ponting (not to be confused with the Ricky Ponting, the Patron Saint of Lost Causes) which for a century have graphically shown the anguish and despair the Brits felt by narrowingly losing out to the Norwegian group led by Roald Amundsen (who’d already seen off the plucky West Germans in the semi-final). The downhearted and disheartened Limeys finally gave up their attempt to return home and were swallowed up by the icy wilderness. Amundsen and his Scandinavians went home to a heroes welcome and a recording contract.

But wait a minute, according to the British ancestors, Scott’s men were not the least bit disappointed to lose. There was, in fact, no race to the pole. There’s was a purely scientific expedition to gain knowledge of the surrounding area for King and Country, with no-one giving a toss whether Amundsen won or not. Ponting set up the most southerly branch of Pront-a-Print, charging a farthing for a photo of the pole and pony on a tee-shirt; Captain Oates left the tent and was never seen again. He is oft quoted as saying “I am just going outside and may be some time”. The end of his sentence was lost in the chill wind. What he really said was “I am just going outside and may be some time. I’ve got all this bunting and balloons to erect for when we see the Norwegians again”. In truth, Scott should not have been played on screen by John Mills but by Norman Wisdom.

So there you have it. Hitler died in 1962, just missing out missing Ronnie Biggs. Van Gogh covered up his own murder and his relationship with young boys and, just like the retreating soldiers at Dunkirk, Scott of Antarctic had nothing to be sad about. It’s a pity they didn’t make it back because The Titanic was waiting for them just off Antarctica to take them home on her second voyage.

99 years later,  a ship was moored off the coast of Libya, waiting for President Muammar Gaddafi who was due to escape on her . However, the ever-popular Dictator would not make it on board nor never get to feel the warm embrace of his old mate Tony Blair again as he died of the multiple bullet wounds he received to the back of the head while resisting arrest.