The route for the Olympic Torch has been announced this morning and, for better or worse, the good people or Dartford won’t be within either a javelin or a stone’s-throwing range of the runners and the flame. Good thing really cos The Incumbent has been practicing her aim with both. If a procession of tracksuit-clad locals and micro-celebrities were to jog past the Potting Shed, a violent salvo of objects, once destined for eBay, would be launched in their general direction. She may manage to cop someone of the stature of a Floella Benjamin or a Jim Davidson around the earhole with an old ornament, causing considerable damage.  But you can never be too sure of a direct hit, so it’s best the entourage stays well away from the neighbourhood.

Since we failed to secure even a single child’s ticket for the egg-and-spoon race, the London 2012 experience is not one to be enjoyed in our house. Coupled with my failure to get a job with the Olympic organization’s photo-team, mention of The Games is strictly verboten around here. (Although we are only assuming I didn’t get the job, me having not received a single word either way from the interviewers. Rude fvckers.) 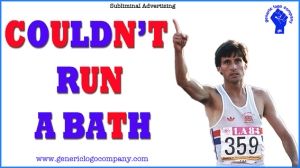 Whenever there’s a news item about next year’s event, or Seb Coe’s beaming face appears on tv, the station is immediately switched off or over – even if it means watching another autopsy on Channel 4 (have they not got any other ideas?). The whole shambles/con (delete where applicable) over the ‘legacy’ and the football stadia, and the ‘affordable housing’ and the ticket prices has really left a nasty taste in the mouth, so we won’t be joining in the fun, if you don’t mind (I bet that’s come as a shock to you, hasn’t it?)

So no runners past the Potting Shed. No cheering-on of the torch by the farmhands. The locals at The Berchtesgaden Arms will not have the chance to wave the flag of St George in celebration of the flame’s progress. They’ll have to save their celebratory bender and Sieg Heil session until the Stephen Lawrence accused get off again.

Casting a cursory glance at the route I think I notice the joggers won’t be taking the torch around neither Tottenham nor Croydon. Probably for the best, I suppose. I think they’ve had enough of flames for a while. That bloke in the furniture shop has only just sat down after giving all those emotional news interviews. It’d be nice to give him a rest for a while.

While we’re on fire-related moans and groans: Can’t we now take this opportunity to ban fireworks altogether? It’s too early to know what really caused the horrors on the M5 at the weekend, but can we not make use of the suspicion by outlawing bonfires and fireworks once and for all? If we can prove they are harmful to the environment, I’d gladly reinforce my immaculate green-credentials in an effort to rid us all of the noise, the smoke and the smell. 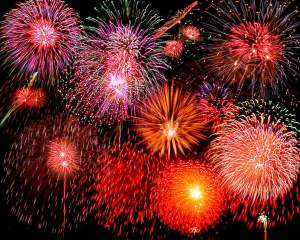 It used to be that you’d only see and hear these bloody things on, or around November 5th.  In 1605 Guy (Guido) Fawkes and a bunch of his catholic mates tried to blow up Parliament. He got caught and the ‘gunpowder plot’ failed. We’ve been celebrating his capture/mourning his failure (delete where applicable) ever since. All well and good, I suppose. Most countries have a yearly festival or celebration day when the fireworks are rolled out. The French have Bastille Day, the day every year they give thanks for not being invaded by the Germans (again). Then there’s the 4th of July, commemorated by Brits the world over as the day we finally let the yanks out in the world on their own. A bit like sending an annoying spotty teenager off to college and getting the box room back. Years later he returns, now owning IBM and degree in shooting people, but the peace and quiet was nice while it lasted.

But now we not only have to start dodging rockets and catherine wheels around 5th November, but we now have to listen to them over Christmas, New Year, Easter, Yom Kippur, Epiphany, Lent, Diwali, the  X-Factor results, Downton Abbey finales, in fact any and every single celebration that someone somewhere feels they need to enjoy. I’m all in favour of a multicultural, multi-faith country where all are welcomed and encouraged to live as diverse and existence as is possible. But why-oh-why-oh-daily-mail do all these festivities have to come with sodding fireworks ? Maurice, the rather nervous dog next door has shellshock – they now feed him on valium and St John’s Wort. There’s a pall of smoke hanging over the lower paddock, making it look like Kabul after the big beardy naughty boys have been about.

They banned smoking on the top deck of a bus and the left hand side of the cinema; they stopped us from riding a motorcycle without a helmet; had an amnesty on handguns; they even banned Tom&Jerry from my tv (presumably to make room for a series on human dissection on Channel 4). Surely there’s a decent case to be made against these rockets and missiles which kill, harm, mutilate and maim so many every year ? I have nothing against blowing up parliament, and happy to raise a glass to the Guido and his mates for having a pop at it. But is blowing up each other, distressing our pets and covering motorways with thick smoke really the way forward ? What if we restrict it to one huge re-enactment every year, underneath parliament, using live ammo. And hope for the best ?

Or the worst. (delete where applicable). 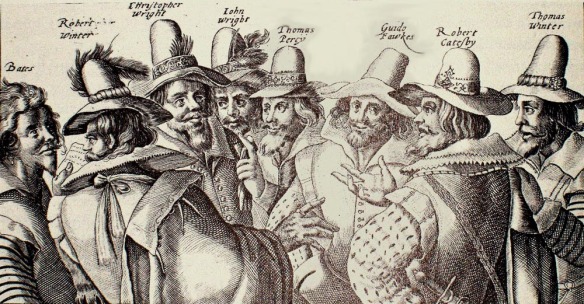 Church of England in crisis talks over resignations at St Paul’s Cathedral.

Mr Yeatman has come out in favour of taxing bank transactions. 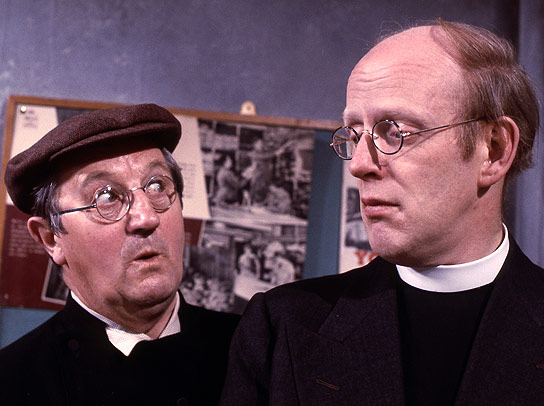 Here this evening the English suffered yet another in a long line of humiliating defeats at the hands of the unfancied Normandians when an extra-time clincher was grasped by veteran shooter, Dominique Strauss-Khan, sending the home side down to what seems to be a final, crushing blow.  For much of the early action, Strauss-Khan’t had gone missing, concentrating his efforts on his controversial “rape and pillage” tactics, particularly the former. But when an unreliable serving-wench (and some clearly mad slapper scribe) shouted foul, Dominique returned to doing what he does best: sticking his balls in the old onion bag (whatever her name is).

The Citing Committee have since decided that as all that nastiness may or may not have happened over two hours ago, Mr Strauss-Can has no case to answer. 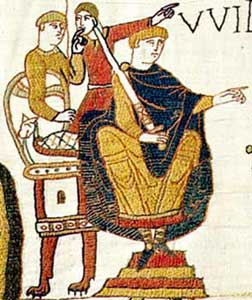 William wins the toss and decides to play with the wind

From the outset the Frenchmen were not considered a threat, such was the animosity between the players and the coach during the warm-up, and the amount of  money they, along with the Holy Roman Empire, have recently had to stump-up to bail out the non-tax paying scroungers of the ancient world. So the English were hoping their opposition would be distracted, but you never know which French side will turn up. Gallic flair, so loved by commentators and Bob Symonds alike, was brought to the fore and after early hiccups, had the English on the back foot.

The English, to be fair, were in disarray from the beginning. Their chief tactician The Silver Fox, (or Le Renard Fraude, as the French know him) had decided to listen more to his close friend and confidant, Squire Werritty, than any of the battle-hardened knights around him. It was clear that Werritty had seen little of real action before and seemed only interested what was in it for him, his sponsors, the Children of Israel, and other generous peoples across the oceans, yet to be discovered. 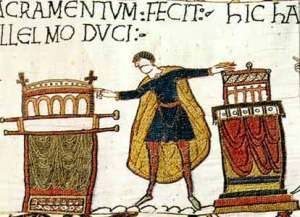 The English Cavalry were also ineffectual, their horses refusing to budge, the knights having been banned this very morning from administering the whip or spurs to encourage forward movement from their charges. The infantry seemed as if they had been drinking of too much of the mead, or kissing of the Dwarf the night before. All this as well as reports that the Normans had discovered vital English tactical information in a nearby park wastebin, apparently deposited there by some feckless English nobleman (the oddly Gallicly-named Le Twin) have thus far been totally rejected by team manager Johnno the Huge-Disappointment. Johnno added that if England could next time pick more Samoans and New Zealanders, they might just have a chance of winning.

Whatever the reasons for their downfall, it wasn’t long before the English were down by one-King-to-nil as the Norman strike partnership of Strauss-Khunt and Waine Le Rue Née picked out the English figurehead, and it was one in the eye for them. In truth, Harold was not hard to pick out, he being the only one on the field of play wearing German kit. Shortly after, Le Rue Née was asked to leave the field, being deemed to be too violent and stupid to take part. Waine was originally picked for the English squad, but in an interview later he stated that he didn’t mind which “fookin side” he played for as long as he could kick some “fooking coonts up the arse”. It is assumed he will be offered the post of Commissioner of the soon-to-be-formed Metropolitan Police. 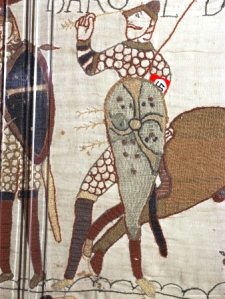 The one consolation to England from losing this day to the Normans is that it saves the embarrassment of losing to the Welsh (which this mob surely would) in the next round the following week. Two questions remain for the English Press Barons: Have the Normans peaked too early?; and has conquering King William married the wrong sister?

Very much so, in fact.

Fears that his arrival would be greeted with apathy were allayed last night when literally some people turned out in London to greet His Holiness Trevor the Last on his In-a-State visit to Britain. His huge mass was celebrated as crowds waited for him to turn several bottles of wine into water. Prayers were said for the tragic loss of his dress sense. Later today the Plastered Parisian Pontiff is expected to make a public apology for years of liver-abuse. 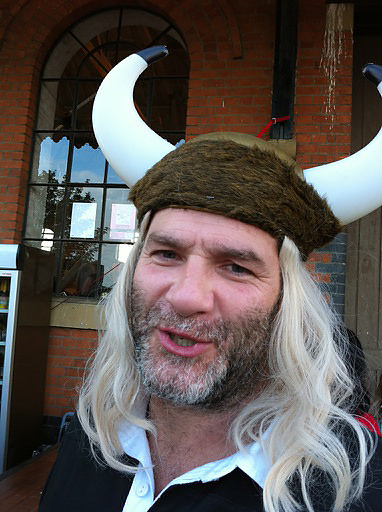 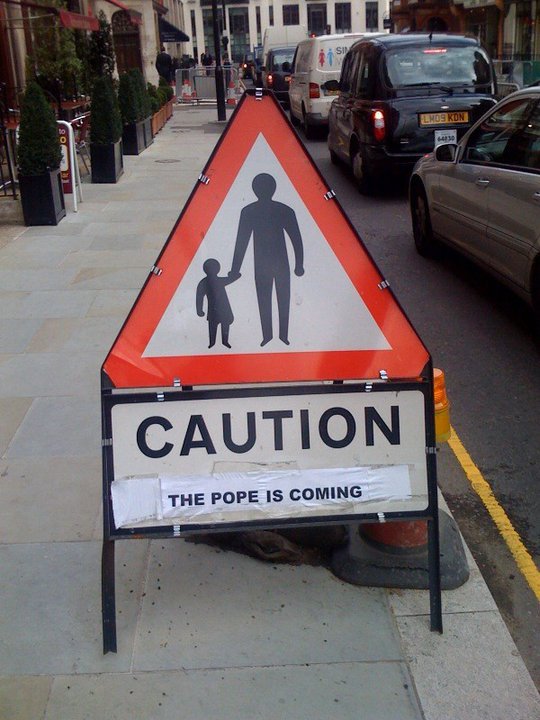