Question: If we care anything at all about photos of Prince Henry flashing his King Edwards about, should our prudish ire be focused on the Prince for doing what so many twenty-somethings tend to do, or should we be pointing fingers at the so-called mate who released the blurry phone photos in the first place ? (by the way, who has a camera phone that poor in quality any more ?) . 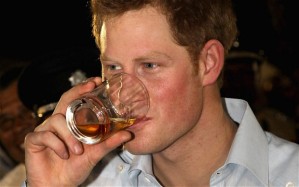 When Harry was lambasted for turning up at a fancy dress party as a Nazi, showing all the tact and class of his granddad (he is out of hospital, isn’t he – else I won’t use that line) I was right up there booing him from the highest gable of my humble terraced abode.

But when an apparently good looking, seemingly fit, charming, ginger (look ! – ginger hair runs in the family, alright ??? – leave it) bloke get’s his kit off during a game of Pissed Strip Billiards, why do we act so surprised? Why is he behaving like this ?? Because he can. He’s a young man, his prospects ain’t bad, and the throng/thong of surrounding scantily clad babes who were dribbling over him that evening seem to have quite enjoyed it. He’s a Royal. Royals have been acting like this for a thousand years. Harry’s Third in Line to the Throne. He’s going to have nothing to do for the rest of his life except drink, shag and dress up as a Nazi. Have we really already forgotten what Prince Andrew was like when he was a kid (let alone how he behaves even now) ? Harry, like uncle Andy, went to war and became a national hero. Now please don’t tell me that because he got his willy wet in Las Vegas he’s now a pariah ?

I’m sure I read somewhere about what people do behind closed doors is their business. He wasn’t garrotting grannies, or molesting beagles at the time, was he ? He went to a party with some blonde birds, got pissed and got his tackle out. Wow ! That’s a first for a young bloke. 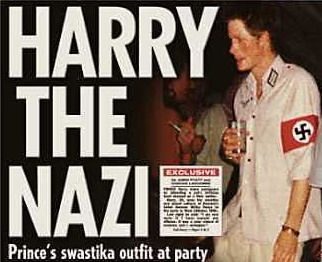 There’s a bloke I know who used to – stone cold sober, mind you – used to get his cock out and put £2.10 in 10p pieces (that’s old 10p pieces) under his foreskin and jangle it in front of any interested female or male close at …er…hand.  The same bloke (I can’t name names as he reads this column and I wouldn’t want to Sean Cooper him.) dragged on a cigarette with his anus while on his way to rugby matches.

Now if Prince Heinrich was photographed lugging on a Marlboro with his arse, one may have cause to question his judgement. As it is, romping with young women after a night on the turps is hardly worth  a bollocking from anyone save his nan. And I’m sure she’ll have a word.

We’ve all done stuff that we’re not particularly proud of. Some of our antics have ended up in national newspapers. I was once in a photo on page 2 of the Daily Mirror (that’s the page where they put their news stories) under the headline “Ban This Paparazzi Scum”. Mum was pleased with that one. I also once ended up in the linen of the Daily Star having posed as a randy removal man for a shoot they’d commissioned for some story they were doing (I can’t remember who wrote it – John Pilger, I seem to recall). It wasn’t my proudest moment. For the record I was bushwacked by the photographer (my boss at the time) and, as is often a studio assistant’s poor fortune, I was forced to dress up and pose. That is my story and I am sticking to it.

Unlike Harry, I knew that these photos were likely to appear in a paper (and unlike Harry I was very happy that they were to appear in the piss-poor Daily Star and therefore only 3 pensioners in the West country were ever likely to see my pic). In both cases, no-one was killed, and apart from my mum and HRH, no-one cared one jot. It may be news in the Daily Star, but any serious-thinking person would file it the Fergie Toe-Job bin.

Please note: I was told to keep my clothes on. It is, after all, a family newspaper. 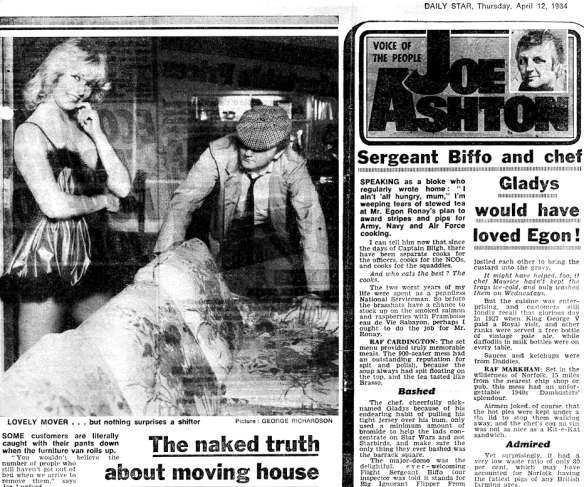 5 thoughts on “Some Day My Prince Will…erm…”