Wonderful. Just superb. I sit here as your humble servant and reporter for those who were not present to see it to tell you that THIS was a great show. Yes it was very British, yes it was odd and Archery/Coronation Streety in the middle, but Roddy Doyle/Frankie Boyle/Danny Boyle, as he was variously called in my house this evening, did a fantastic job. Just brilliant.

I opened the windows during the celebration of the Jarrow marchers and the NHS to listen to the monocles popping out all over north Kent. Ha !! Just brilliant. I hope Andrew Lansley recorded it. Only a buffoon ( there’s a box you can sign at the end of this piece) will have missed the director’s direct stab at the hand that feeds h1m – this administration’s final act of slaughter and murder of the NHS, the one the one thing which this country can boast about since the end of the seond world war. Sadly for the ruling classes, they employed a working class boy to tell Britain’s history. If you listen carefully between the drummers, you could hear the squeaking of chief assassin David Cameron’s chair as he shifted his buttocks from side to side while he witnessed the nurses and dancers celebrate our once proud gift to the world (some of us are still using it).

Anyway, apart from that I can sit here without any fear of contradiction or criticism and say this was the best opening ceremony I have ever EVER seen (and I’ve sat through a couple.). Whatever I may have said about the games, Mr Boyle is exempt from criticism. My GOD , that CAULDRON, and the FIREWORKS at the end. SENSATIONAL !!!!!!!!!  BEST EVER

And then McCartney came on.

It’s nice to hear that the Olympic Torch will be in Croydon today. All morning I’ve been singing to myself  “It’s coming home, it’s coming home, fire’s coming home…”.
I suppose if (as has often happened on this relay) the flame goes out they can always re-ignite it with the embers of a burning sofa left over from the riots.

Yes, there’s no getting away from it : IT’S here. That event that you and everyone at T’BBC Salford has been looking forward to.  London 2012 is here and it doesn’t matter that, like me, the very thought of Sebastian Coe induces in you a touch of the Yangtze Rapids it’s here to dominate your tv set, pub conversation and in some cases, the very hell you live in.

Nobody enjoys sport more than I do (unless I have to actually compete in it, you understand) but I do get the taste of a thousand lemons in my mouth as the BBC commentaries and fanfares are drowned out by the clinking-clanking sound of Coca-Cola, McDonalds, Samsung, Procter&Gamble (as if it’s much of a gamble)  G4S and the rest of them hauling sack-loads of our cash out of the country. And all this before Brendan Foster even gets the chance to sober up, or Michael Vaughan interviews Steve Redgrave about his two Olympic Gold Medals.

The decision to move the BBC out of London in the Jubilee Year (in the end, the Queen refused to move to Bury) and the LONDON olympics is really bearing fruit now. The team in Salford are left to report on events in London the way that Jeremy Bowen used to report on events Syria from a vantage point over the Jordan border. They do, of course, have people nearer the action, but for Orla Guerin read Carol Kirkwood, and for John Simpson read the brilliant Mike Bushell. From their gantry this morning above Freedom Square…sorry…Olympic Park, Carol kindly familiarised the viewer with the London skyline, as if it was us who’d been away, not them:

“…and to the left of the screen you can see the Shard: one of the biggest buildings in London…if not the biggest”. It’ll be one or the other darling, but well done on your preparation nevertheless. She ran out of time before she could show us the exact location of the community Gun Emplacements “Sponsored by Accurist”.

Bushell, with his Homer Simpson gormless smile splashed across his face, sat motionless, desperately trying to remember that Wiggly Baggins had won the Tour de France and not scored a double-hundred at Chelmsford yesterday. Such a pro.

Somewhere between the enthusiastic amateurs and the Shard in the distance (however big it may or may not be) one could just spy the scene of the crime, Park Olympia: A dozen or so thoughtfully-designed, and on a few occasions, strikingly beautiful stadia dotted around what looks like the industrial storage facility next to Heathrow’s Terminal 4.

If not exactly a war-zone that Kate Adie would be proud to report from, then something that needs the help of the Olympic torch and an accelerant. My knowledge of the English language is not advanced enough to express my sentiments on the bit of sculpture in the middle.

So, at last the sun has come out, as if to welcome the world’s finest athletes to our shores. (I knew it would be hot this week – Carol Kirkwood predicted snow) It certainly shone on 12 South Africans yesterday as 11 of their cricketers made life miserable for an Anglo/Bokke XI at the Oval yesterday, and the 12th – a golfer- not only won The Open at Lytham, but went a long way to dispelling the myth that no-one has ever met a nice South African. Ernie Els overcame the hapless and helpless Aussie Adam Scott who Devon Loch’ed up the home straight, playing the sort of golf that I’d be proud of – bogeying the last four holes.

Poor Adam, it’ll be tough to forget that one. Clearly his caddie Racist-Stevie Williams (it’s a double-barrelled forename), who has claimed all those Tiger Woods victories as his own, clearly lost his golden touch and should now be sacked, never to whiten our door again. Some weird mirrored symmetry in a liberal-thinking, white South African, beating a bigoted kiwi.

But never mind all that now. It’s Olympic week. So gird your loins and cheer for your boys (and girls). Cast aside your petty squabbles with racism, corruption, corporate greed, scorched earth policies and financial impropriety. This is England, after all. You should be used to it by now.

And Seb can go and fuck himself. 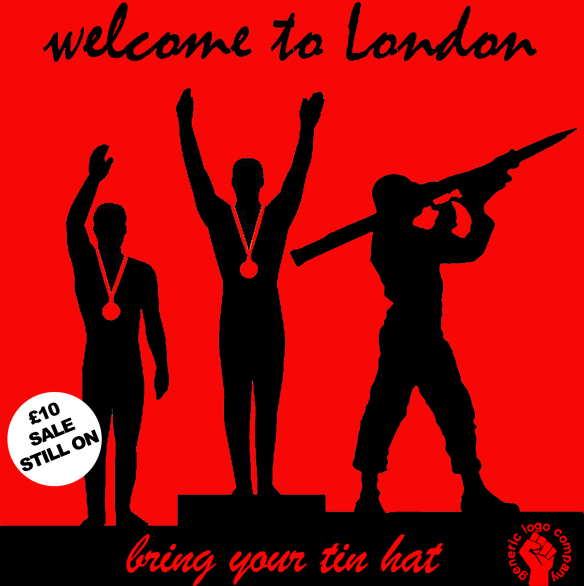 The route for the Olympic Torch has been announced this morning and, for better or worse, the good people or Dartford won’t be within either a javelin or a stone’s-throwing range of the runners and the flame. Good thing really cos The Incumbent has been practicing her aim with both. If a procession of tracksuit-clad locals and micro-celebrities were to jog past the Potting Shed, a violent salvo of objects, once destined for eBay, would be launched in their general direction. She may manage to cop someone of the stature of a Floella Benjamin or a Jim Davidson around the earhole with an old ornament, causing considerable damage.  But you can never be too sure of a direct hit, so it’s best the entourage stays well away from the neighbourhood.

Since we failed to secure even a single child’s ticket for the egg-and-spoon race, the London 2012 experience is not one to be enjoyed in our house. Coupled with my failure to get a job with the Olympic organization’s photo-team, mention of The Games is strictly verboten around here. (Although we are only assuming I didn’t get the job, me having not received a single word either way from the interviewers. Rude fvckers.)

Whenever there’s a news item about next year’s event, or Seb Coe’s beaming face appears on tv, the station is immediately switched off or over – even if it means watching another autopsy on Channel 4 (have they not got any other ideas?). The whole shambles/con (delete where applicable) over the ‘legacy’ and the football stadia, and the ‘affordable housing’ and the ticket prices has really left a nasty taste in the mouth, so we won’t be joining in the fun, if you don’t mind (I bet that’s come as a shock to you, hasn’t it?)

So no runners past the Potting Shed. No cheering-on of the torch by the farmhands. The locals at The Berchtesgaden Arms will not have the chance to wave the flag of St George in celebration of the flame’s progress. They’ll have to save their celebratory bender and Sieg Heil session until the Stephen Lawrence accused get off again.

Casting a cursory glance at the route I think I notice the joggers won’t be taking the torch around neither Tottenham nor Croydon. Probably for the best, I suppose. I think they’ve had enough of flames for a while. That bloke in the furniture shop has only just sat down after giving all those emotional news interviews. It’d be nice to give him a rest for a while.

While we’re on fire-related moans and groans: Can’t we now take this opportunity to ban fireworks altogether? It’s too early to know what really caused the horrors on the M5 at the weekend, but can we not make use of the suspicion by outlawing bonfires and fireworks once and for all? If we can prove they are harmful to the environment, I’d gladly reinforce my immaculate green-credentials in an effort to rid us all of the noise, the smoke and the smell.

It used to be that you’d only see and hear these bloody things on, or around November 5th.  In 1605 Guy (Guido) Fawkes and a bunch of his catholic mates tried to blow up Parliament. He got caught and the ‘gunpowder plot’ failed. We’ve been celebrating his capture/mourning his failure (delete where applicable) ever since. All well and good, I suppose. Most countries have a yearly festival or celebration day when the fireworks are rolled out. The French have Bastille Day, the day every year they give thanks for not being invaded by the Germans (again). Then there’s the 4th of July, commemorated by Brits the world over as the day we finally let the yanks out in the world on their own. A bit like sending an annoying spotty teenager off to college and getting the box room back. Years later he returns, now owning IBM and degree in shooting people, but the peace and quiet was nice while it lasted.

But now we not only have to start dodging rockets and catherine wheels around 5th November, but we now have to listen to them over Christmas, New Year, Easter, Yom Kippur, Epiphany, Lent, Diwali, the  X-Factor results, Downton Abbey finales, in fact any and every single celebration that someone somewhere feels they need to enjoy. I’m all in favour of a multicultural, multi-faith country where all are welcomed and encouraged to live as diverse and existence as is possible. But why-oh-why-oh-daily-mail do all these festivities have to come with sodding fireworks ? Maurice, the rather nervous dog next door has shellshock – they now feed him on valium and St John’s Wort. There’s a pall of smoke hanging over the lower paddock, making it look like Kabul after the big beardy naughty boys have been about.

They banned smoking on the top deck of a bus and the left hand side of the cinema; they stopped us from riding a motorcycle without a helmet; had an amnesty on handguns; they even banned Tom&Jerry from my tv (presumably to make room for a series on human dissection on Channel 4). Surely there’s a decent case to be made against these rockets and missiles which kill, harm, mutilate and maim so many every year ? I have nothing against blowing up parliament, and happy to raise a glass to the Guido and his mates for having a pop at it. But is blowing up each other, distressing our pets and covering motorways with thick smoke really the way forward ? What if we restrict it to one huge re-enactment every year, underneath parliament, using live ammo. And hope for the best ?

Or the worst. (delete where applicable).