Doritos vie for the title of Best Superbowl advert 2014.

Cricket has been used by advertisers to sell their stuff for over 100 years. From Bats to Brylcream, Custard Powder, Gaspers and Trades Unions, all of them have lined up to use images of the stars of the day, the role models and heroes of the time, to product promote. Of course, Saatchi’s aren’t exactly bursting a lung to get at the England players at the moment, (although I understand Ex-lax and Nytol are in negotiations with the MCC).

So in lieu of anything else, here’s a Roland Butcher’s at some of the ads and artwork of great (and not-so-great) Cricket Ads. 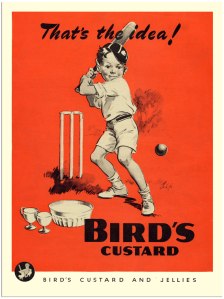 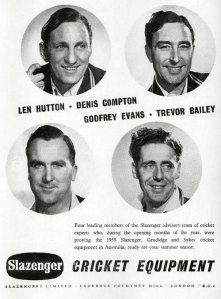 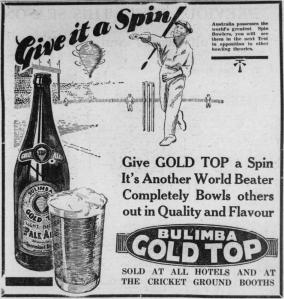 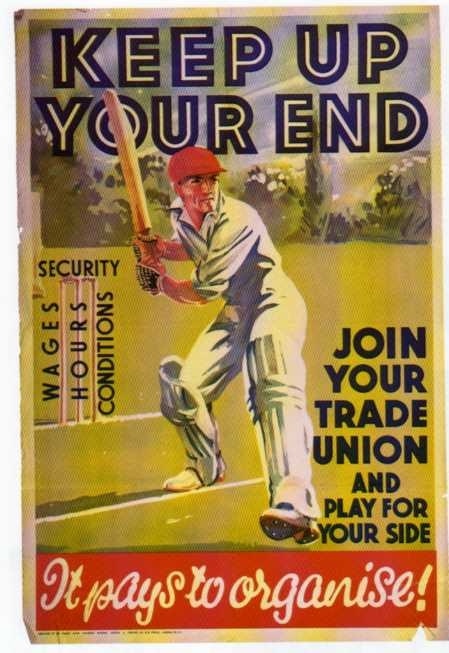 Spotted by one of our American correspondents. I’ve asked for a couple of gallon.

I’d forgotten all about this one. No real reason to post this advert here and now, but it’s funny, rarely seen (I can’t believe it’s been banned), and my old mate Ben played the dad in it. Silly sod, is our Ben.

The things you find out out when starting up a new business. 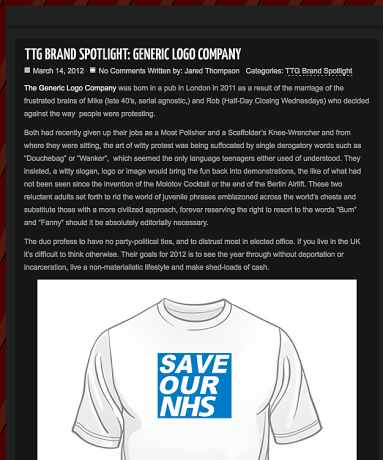 For instance, I found out that I’m useless with money. Honestly, I am. Apparently The Incumbent knew this years ago, but I’ve only just found it out. I think it’s dawning on my my biz partner Rob too.
I also, I found out that there is many a website out there which seeks out the newest and bestest t-shirt companies out there and are happy to tell the world about them. One of these sites is called The Tee Gazette – a fast-moving site which constantly updates its content, delivering the best that’s out there to the t-shirt-buying community (it says here) around the world. It moves so fast that by the time some of you read this, the piece you are looking for has probably disappeared already. With no more than a dozen pleading emails, the good guys at TTG (as we now know them) agreed to feature our company within its pages. Marvellous, we thought.

So Jarred, my new mate at TTG, asked for some copy to help him write a review of our site. He asked me for the company’s origins, it’s goals, aims, and philosophy. A mission statement, as it were. I was feeling in a slightly Sharp Singlish mood when I sent over the copy, and as such didn’t really expect him to use much of it.

Well what the hell do I know ? Apart from removing my trademark typos, dear dear Jarred used the bio I’d sent him word for word. You probably can’t read the copy in the pic above, so here it is below. And a big HUSSAR and BANG ON! Goes out to Jarred at TTG. He either laughed at every word, didn’t understand any of it, or neither:

The Generic Logo Company was born in a pub in London in 2011 as a result of the marriage of the frustrated brains of Mike (late 40′s, serial agnostic,) and Rob (Half-Day Closing Wednesdays) who decided against the way people were protesting.

Both had recently given up their jobs as a Moat Polisher and a Scaffolder’s Knee-Wrencher and from where they were sitting, the art of witty protest was being suffocated by single derogatory words such as “Douchebag” or “Wanker”,  which seemed the only language teenagers either used of understood. They insisted, a witty slogan, logo or image would bring the fun back into demonstrations, the like of what had not been seen since the invention of the Molotov Cocktail or the end of the Berlin Airlift. These two reluctant adults set forth to rid the world of juvenile phrases emblazoned across the world’s chests and substitute those with a more civilized approach, forever reserving the right to resort to the words “Bum” and “Fanny” should it be absolutely editorially necessary.

The duo profess to have no party-political ties, and to distrust most in elected office. If you live in the UK it’s difficult to think otherwise. Their goals for 2012 is to see the year through without deportation or incarceration, live a non-materialistic lifestyle and make shed-loads of cash.

And on the off-chance you wanna see the full review (and, of course, get your wallet out), here’s the link to the Tee Gazett page:

Just a couple of items raised a monobrow today. I notice my beloved Blackheath is to receive some help from a terrorist attack. Which is nice.

The Ministry of Defence (MoD) is considering plans to install surface-to-air missiles in Blackheath and Shooters Hill during the Olympic Games.The MoD said it had taken military advice to identify sites to base the defence systems to protect the skies over London in the event of an attack.Eltham and Plumstead MP Clive Efford said he was concerned at the “lack of consultation”.

The MoD said no final decision had been made to use the air defence systems.Mr Efford said he had now written to Defence Secretary Philip Hammond to complain about not being consulted.The Labour MP said the first he heard about the plans was when half a dozen trucks and trailers arrived at Oxleas Wood, near Shooters Hill in his constituency.

“I accept there has to be security for the Olympics and inconvenience but there are proper processes to go through,” he said. “I would have expected a full briefing from the minister. This is a site of special scientific interest so I was alarmed when I heard. I have no idea of the scale of this plan and what damage might happen.”

Whether or not the local MP is a little bit naive expecting a full briefing is a moot point, but if the MOD could point their Exocets towards the heavy lorries that daily get stuck in the Blackwall Tunnel, that would help immeasurably. They’d get a perfect view from the top of Shooters Hill too. 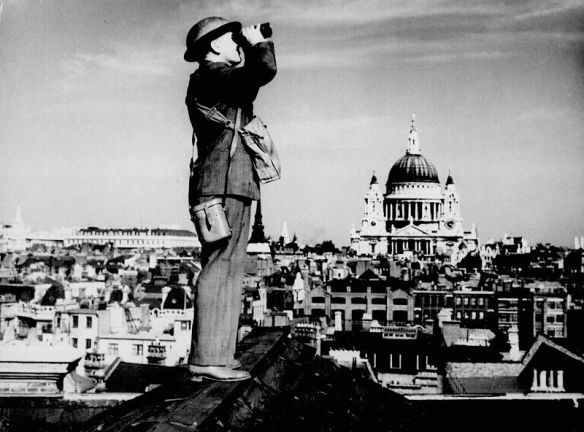 Then there was this in The Guardian today:

As a metaphor for the London Olympics, it could hardly be more stark. The much-derided “Wenlock” Olympic mascot is now available in London Olympic stores dressed as a Metropolitan police officer. For £10.25 you, too, can own the ultimate symbol of the Games: a member of by far the biggest and most expensive security operation in recent British history packaged as tourist commodity. Eerily, his single panoptic-style eye, peering out from beneath the police helmet, is reminiscent of the all-seeing eye of God so commonly depicted at the top of Enlightenment paintings. In these, God’s eye maintained a custodial and omniscient surveillance on His unruly subjects far below on terra firma….

…Critics of the Olympics have not been slow to point out the dark ironies surrounding the police Wenlock figure. “Water cannon and steel cordon sold separately,” mocks Dan Hancox on the influential Games Monitor website. “Baton rounds may be unsuitable for small children.”

In addition to the concentration of sporting talent and global media, the London Olympics will host the biggest mobilisation of military and security forces seen in the UK since the second world war. More troops – around 13,500 – will be deployed than are currently at war in Afghanistan. The growing security force is being estimated at anything between 24,000 and 49,000 in total. Such is the secrecy that no one seems to know for sure.

During the Games an aircraft carrier will dock on the Thames. Surface-to-air missile systems will scan the skies. Unmanned drones, thankfully without lethal missiles, will loiter above the gleaming stadiums and opening and closing ceremonies. RAF Typhoon Eurofighters will fly from RAF Northolt. A thousand armed US diplomatic and FBI agents and 55 dog teams will patrol an Olympic zone partitioned off from the wider city by an 11-mile, £80m, 5,000-volt electric fence.

All this should give walking around London this summer that warm, cosy feeling. It’ll be just like a Richard Curtis movie. Especially the ones he directed starring Wesley Snipes and Liam Neeson shooting the fuck out of everything. The English Tourist Board must be loving it. And all this just to make wads of cash for Seb, Boris and their cronies. Maybe my missing out on tickets for the heats of the Individual Synchronized Swimming was a blessing in disguise after all ? Are they putting frogmen in the pool ? Buster Crabbe sitting at the bottom of the deep end, should the famous Al Qaeda Underwater swim-team decide to invade ?

I’m not sure how much concentration I could manage if I was competing in the Archery or the 1 yard Air Pistol if I could sense either a ground-to-air missile at the other end of the field, primed and ready to go; or the threat of a hooded loony’s AK47 spitting bullets all over the place.  I’d want more than a BB Gun or a bow-and-arrow to defend myself with.

The English Cricket team have got it right: They’re bad enough without going out to bat in Sniper Alley in downtown Lahore. I’m not sure I’d be able to pick a googly if I thought the mad mullahs were using my temples as target practice. So they refuse to play in Pakistan. They’d much rather be humiliated and beaten in the UAE. I wonder how long it will be before Olympic national teams decide not to visit a country marked down in the book by religious extremists as Satan’s Little Helper ?

Maybe not. That would be taken as a huge diss and insult to the Old Country. They wouldn’t dare upset old Dave. 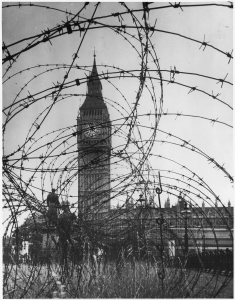