A note from The Ed: This piece was written back in 2010, as it happens, a couple of years before what I thought was my first significant stroke (which I seem to have completely recovered from). It now appears that what I was undergoing in this instance below was my real first stroke, albeit a mini-stroke, as my Doc calls them. I clearly had no idea at the time, and treated it with some mirth. Be warned. The Ed. 2014—

It was 31.7 Degrees Celsius in Gravesend yesterday. That’s 89 in old money. And the infallible BBC weather service informs me that today will be similarly toasty. Frankly I’m a little concerned. No, I’m not planning to go to Gravesend today, as lovely as it is, and I’m not further demonstrating the Great British obsession with the weather. No, I’m worried about me.

I’m off to play cricket today somewhere north of London and, let’s be honest, 89 degrees is far too hot for someone like me to be running around a field, playing a game like that. A few weeks ago, during one of this summer’s previous heatwaves, I had to excuse myself from the field of play as I suddenly went blind. I’d been ‘charging’ in, doing my thang, trying to knock the batsmen’s heads off, and it was hot work, I can tell you. In between overs, for every bottle of water I drank, two were poured over my head. 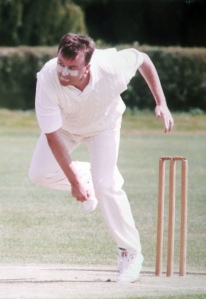 After half an hour-or-so of this, I was standing in the outfield, watching my bowling partner toil away in the stifling conditions, and preparing myself to bowl again when things started going all hours-yer-father. With my hands on my knees, sweating audibly, and vainly attempting to get enough air into either lungs to enable me to emit a whimper, I looked towards the batsmen in case the ball was coming in my direction. It was then I had my Donald Pleasence moment: I couldn’t see a bloody thing. My sight was pixelated in my left eye and a complete blur in my right. When you’re standing 20 yards from a man hitting cricket balls around the park, it’s best, I always find, to have both minces in full working order, lest one of the aforementioned missiles hurtles in your direction.

Now I’ve made my leave from a sporting field for many many reasons- broken bones, pulled muscles, drunkenness to name but a few, but going blind was a new one on me. I waved in the vague direction of the skipper, who having suppressed a titter, led me from the arena, like a man leads his 90 year old myopic mum into a nursing home. I was clearly not well. More water was poured over my head, litres of Dioralyte were drunk until, eventually, my sight returned. (It says on the dioralyte packets they should be taken after “each loose bowel movement”, which means I ought to have been drinking it every half hour for the past 30 years.)

Now I’m not a doctor (no, really, I’m not), and I don’t know if my temporary loss of HD was due to the oppressive conditions, the rather convivial week I’d sent in the boozer the night before, or indeed the Chicken Chili Masala I’d devoured just hours before the match. Whatever it was, it rather scared me. And true to form, my preparation for this week’s sporting encounter has followed a similar path. I even ache typing this, so god knows how I’m gonna feel in three hours time when I’m asked to weave my magic with bat and ball. I do know it’s gonna hurt. I can’t make my mind up if this is a post or a last will and testament. 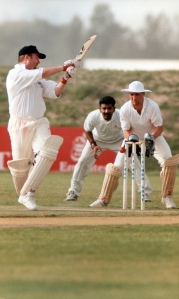 So forgive me if it all goes quiet over here. I don’t have BUPA and I’m not sure what the broadband speed is like at St Albans General Hospital. So I post this in the hope the skipper is reading and takes pity on me. I’d happily stand under the shade of a tree on the boundary, breaking sweat only to clap a wicket or an incoming batsmen. I fear, though, he’ll toss the ball to me and ask me to bustle into the wicket all afternoon until I drop. Perhaps I’ll be saved and the match will be rained off and we can spend all afternoon in the boozer ? The weatherman says it’s gonna be a scorcher, and I’m hoping they are up to their usual, useless accuracy.

So pray for me, pray for rain, or pray I bowl so badly that the captain takes me off after one over. My pride will be dented, but at least I’ll survive to see the match tomorrow.

5 thoughts on “Taking My Eye Off The Ball”