From the vaults of The Sharp Single we bring you a long-forgotten passage and the original plate from a first edition of Treasure Island where the author describes a cricket match taking place outside the Admiral Benbow Inn.

(This chapter was removed from subsequent editions.) 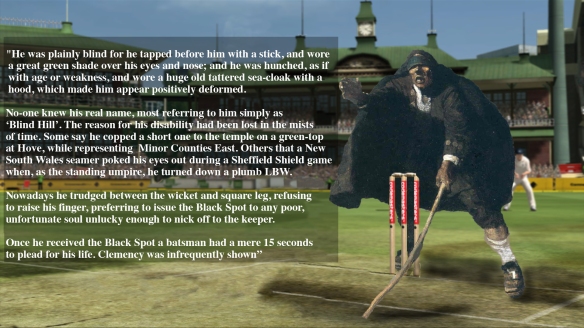 “He was plainly blind for he tapped before him with a stick, and wore a great green shade over his eyes and nose; and he was hunched, as if with age or weakness, and wore a huge old tattered sea-cloak with a hood, which made him appear positively deformed.

No-one knew his real name, most referring to him simply as ‘Blind Hill’. The reason for his disability had been lost in the mists of time. Some say he copped a short one to the temple on a green-top at Hove, while representing Minor Counties East. Others that a New South Wales seamer poked his eyes out during a Sheffield Shield game when, as the standing umpire, he turned down a plumb LBW.

Nowadays he trudged between the wicket and square leg, refusing to raise his finger, preferring to issue the Black Spot to any poor, unfortunate soul unlucky enough to nick off to the keeper.

Once he received the Black Spot a batsman had a mere 15 seconds to plead for his life. Clemency was infrequently shown”