I remember feeling like this before. I’d seen Ben Johnson win the Olympic 100 meters final in 1988. I’d watched the race live on tv and it was a fantastic spectacle. Johnson was sensational. He mullered them.

Except he wasn’t and he didn’t. He was stripped on the gold medal, having taken performance-enhancing drugs. I took it personally. To have enjoyed such a magnificent performance, then just hours later to have that enjoyment dashed by learning that the Canadian was a drugs cheat. I felt hollow. It was a real downer.

I suspect I wasn’t alone when my initial joy at seeing Usain Bolt run for the first time was tempered by the fear that he too may be on something. I remember turning to The Incumbent and saying “oh god, I hope he’s clean”. Bolt was a new face, a fresh face, with a touch of class, a bit of the rebel about him. He had a cheeky smile and a rehearsed pre and post-race comedy routine.

He didn’t act like a middleweight boxer on the blocks:- sniffiing and snorting, punching the air like these sprinters tend to do. He winked at the camera, he struck the pose, he actually looked like he was having fun. “For Christ’s sake let this bloke not be a drugs cheat”. Pleasingly at time of writing Usain seems to run short distances in very fast times without the help of any illegal stimulants (though I’m told he loves a Guinness or three) .

Cycling and F1 seem forever to be making headlines for some form of cheating or another. The lack of moral fortitude that surrounds Grand Prix racing is well documented, at one stage a F1 team impelled a driver to risk death to both himself and to the watching spectators by crashing his own car into a wall at high speed. All for the good of the team.

There is a school of thought that professional cyclists couldn’t possibly perform to the high level they do throughout the season WITHOUT taking drugs, such are the pains and stresses the riders put themselves through. Drug abuse in this sport is rife. Almost accepted.

So common are the instances of cheating in the above sports that it’s difficult to see any fan (and there must be some around, surely ?) getting too upset when the next scandal is exposed. It’d be a bit like a soccer fan having his week ruined because he saw a center forward dive in the box, or a midfielder feign injury, or a player wave an imaginary red card to get his opposite number sent off. It just happens far too often.

When South African cricket captain Hansie Cronje was discovered to have accepted money from a bookmaker in exchange for making certain decisions on the field, the world of cricket was plunged into a mire of cheating, gamesmanship and skulduggery. Part of my world, and of cricket fans the world over, fell apart. Cronje, up until that point, was universally regarded as a good egg, a model sportsman. Our beloved game was in danger of being dragged into the murky depths previously thought to be the domain of baseball, Italian football and national hunt racing.

The very phrase “it’s not cricket” was born out of a sport which prided itself on fair play, the corinthian spirit, and the feeling that ours was a noble sport, played by gentlemen (conveniently forgetting that the greatest of all english cricketers, W.G.Grace was one of the biggest rouges, diddlers and rapscallions the world of sport has ever known.) “It’s not cricket”. It’s not fair. It’s not right. It’s not how to play the game ! If Hollywood ever portrays an old English duffer they’ll invariably write “it’s not cricket” into his dialogue to illustrate he’s both English and clings to this quaint idea of “fair play”

Cricket, apart from being the greatest of all games, is perfectly set-up for betting and therefore cheating. There are so many opportunities to bet on each part of the action, and if people can bet and make a lot of money on those events, then you can bet your favourite testicle that someone will have worked out how to fiddle the outcome, con the bookie and make even more wads of cash out of it. And that leads us on nicely to the current scandal which has erupted over the weekend.

Several players on the Pakistan team currently playing against England in a series of matches have allegedly received money from persons unknown to bowl ‘no-balls’ (foul balls) at specific times during the match. Evidence gathered by the London News of the World newspaper suggest that specific moments were singled out for these illegal acts to occur, and right on cue that’s exactly what happened. Apparently it’s called Spot Fixing (as opposed to Match Fixing). It doesn’t seem to have altered the outcome of the match (the Pakistanis lost heavily, and would have done so in any event) but the inference is that if these lads have been found out to have taken cash for intentional cock-ups here, what else has been going on ?

Have they previously thrown matches ? Have they gotten themselves out earlier than they would have naturally have done so ? In the multi-billion dollar world of cricket betting it’s impossible to predict you’ll win a match, but much easier to chuck a match, or drop a catch or bowl a ‘no-ball’. There’s been a suggestion that some of these young men don’t merely enter into these nefarious activities because of the financial rewards offered by the odd dodgy better or bookie. Allegedly players have been intimidated, families and friends have been threatened, some have even been kidnapped. All very murky, if not distasteful and distressing stuff.

But it’s much sadder than that. One of the headline-grabbing names accused of taking bribes is that of Mohammad Amir, an 18 year old fast bowler who has been quite magnificent this year. Watching him bowl gave me the same goosey feeling that I had when I saw Bolt run the hundred meters for the first time, when I watched Ian Botham skittle the Aussies in ’81, and Freddie Flintoff destroy bowlers in 2005. I never saw George Best play as a kid for Man Utd (before he hit hit the bottle) but I reckon if I did I would have been awe inspired, realised this was the next great player. Amir has been sensational. The youngest bowler to reach 50 wickets in Test cricket, he plays the game with a smile on his face while all the time retaining that nasty streak all great fast bowlers need. But the headlines wont say that in the morning, or for weeks to come. 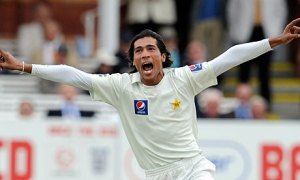 If these allegations are substantiated, Amir will be forever associated with this next sorry episode in cricket’s recent squalid history and not his fantastic feats on the field of play . He won’t be the first (or the last) from his nation (or any other) to be involved in back-of-the-hand deals with back-streets betting sharks. But if you’d have watched him this summer, as I have, you’d be as sad as I am for having that joy of seeing the beginning of a brilliant new career replaced by the despair of yet another young talent seduced by the dark side of professional sport.