David Cameron and Ed Miliband take turns to clear up the mess.

(Actually, it can’t be Dave and Ed – this is quite funny).

A special mention goes to Nick Clegg‘s  portrayal of the staircase.

Ed Miliband’s getting a little full of himself for his own good. Buoyed by the local election results and the turmoil within the Tory Party, you can imagine Ed leaning across the dispatch box in the House of Commons and asking Dave Cameron “Surely you’re not the best politician to lead your party?”
“Maybe not,” DC might reply “but at least I’m the best politician in my family” (copyright Paul Collingwood).
A weak man is a short time in politics, so who can blame Mr Ed for crowing while he can? For a good few months the press and his party has been on his back, accusing him of being dull, uninspiring, distant and not his brother, but following the recent council polls, he and his adenoids feel vindicated in irritating a nation for the past couple of years. If it wasn’t for Bonking Boris, last week would have been a true disaster for the Tories, spurring on the bank-benchers to launch an immediate revolt. As it is, the win for the incumbent London Mayor merely highlights just how much more popular he is than the resident PM…er…sparking an immediate revolt among Tory back-benchers. 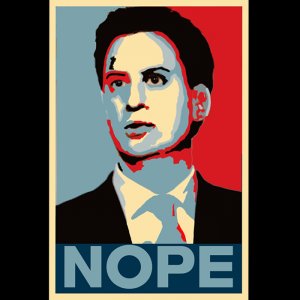 There’s nothing more enjoyable than watching the British GOP knock shite out of each other, fighting like cats in a sack in attempt to gain the high ground. A wave of nostalgia washed over me this morning as the late, great John Redwood took the the airwaves of T’BBC to launch version #738 of the Tory Right’s plan to get back into power (under its own steam). In re-hashing and re-launching the old battle cries of “Europe Out/Lords In/Wogs Out/Cronies In“, the former forgetful Minister for Wales reminded all listening of just why the Conservative Party hasn’t won an election in this country since 1992.

You know when you’re in trouble when chinless twerps like Nadine Dorries and Amanda Platell are calling you out of touch and if there’s a better blood sport to watch than the Tories fighting like a bunch of pissed wedding guests, then I’d like to see it. The Posh Boys’ honeymoon is over and they have painted themselves into a corner (easy on the metaphors, Harry). On one side they need to remain faithful to Sir Bufton Tufton of Tunbridge Wells – shooting, flogging and hanging anything that moves, but on the other thy need to give their coalition partners a good luvvie-cuddle as they try to convince the Liberals that they really are a new, warm green version of the old Right. It’s as convincing as watching Tom Cruise walking out with Katie Holmes.

As if things weren’t bad enough for Dave and Gid, then Frank goes and wins in France. A socialist hasn’t been in elected in France since Johnny Hallyday turned 80 (1981) yet the people of France have decided they no longer want the Poisoned Dwarf anymore and will try Francois Hollande for a while, especially as he’s promised to stand up against big bad Angela from Allemagne. Rather him than me.

The French people have spoken and ousted the little git. Across The Channel, however, no matter how awful Tony Blair and then Gordon Brown were for the UK, and however long Labour were in power, enough people still couldn’t bring themselves to vote for Cameron for PM. It doesn’t look good for him. I mean, I fancy myself up against Miliband. AT ANYTHING. And I’m sure you do too. But, even with the wholehearted support of The Mail, The Sun and Fox Skinning Gazette this charmless berk can still not rally enough support to attempt to lead the country out of recession without the shameless toadying support of the former Liberal Party. When you have to look to Simon Hughes, Chris Huhne and Beaker (whatever his real name is) to be electable and to get your policies through, times are indeed tough.

The Liberals appalling showing at the elections have led the wonderful Lembit Opik to call for Nick Clegg to resign. Jesus, no wonder Ed Miliband’s happy. In a few months he could be fighting a coalition of parties led by Boris Johnson and Limpet Optic. And if that doesn’t spell another 20 years of socialist government, I dunno what does. 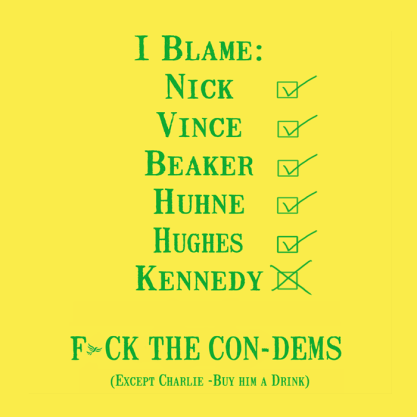