The end of another traumatic week, one way or another. Thankfully this week wasn’t all about me or the member of staff in a pub I’d abused in some way (though it’s early yet). No, this week was certainly all about The Incumbent Mrs B — the long-suffering female who’s been so lucky over the past few years to have the pleasure of living with me. If you stick your head out of the window you may be able to hear another chunk of Crimean cannon ball being filed down as they make her Victoria Cross. Nobody said it was gonna be easy, kid. And they were right. I’d like to take this opportunity here and now to apologise to The Incumbent for all the pain and sorry she has gone through on my behalf over the years, and state categorically that it won’t happen again. Not unless I get drunk tonight. 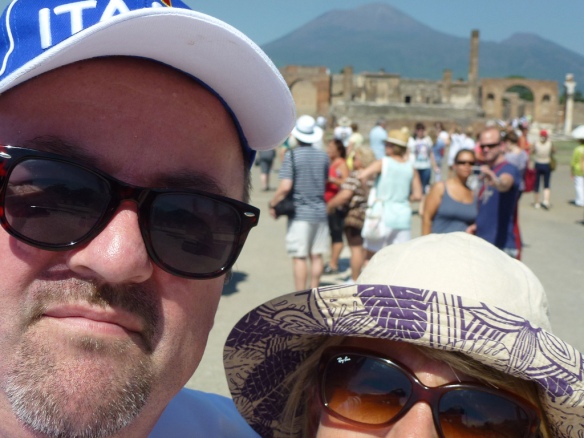 Proving that there should be an age-limit to prevent old people attempting selfies. That’s Mt Vesuvius in the background , no idea who the two people in the foreground are.

So, first some good news: the hunt for the Incumbent’s family continues. Those of you in the know will understand this house has recently become a poor man’s version of Who Do You Think You Are ?  (I’m appearing next year on BBC3’s highly successful “Why Do You Think You Are ?” where, if you can’t justify your existence, you are made to sit down and watch a whole episode of The Call Centre —a show worse than anything Jack Whitehall has come up with.**)

Our version doesn’t have a film crew, a producer or mood music; we haven’t had to fly Mrs B around the globe (I had to drive her to Feltham once); and there’s not even a visit to the British Museum or a Holocaust Memorial in sight, but I’m hoping the Beeb or even 5 might pick us up sooner or later. I won’t go into too many details here — as The Incumbent will want to tell you her story in her own words, and probably with more accuracy and clarity, but suffice to say that she’s  suddenly become the rather shocked relation of a slew of new full-sisters, half-sisters, short dogs and tall nephews and heaven knows how many other assorted family members.  Good news indeed after such a long search. However, having traced her lineage, if Nigel Farage (rhymes with garage) ever comes to power my Missus will be one of the first he’ll send back home to the continent. I do hope so anyway — as if Farage (as in marriage) and his mob get in I’m going to need somewhere to stay as I shall be packing my bags and will be on the boat right behind her. Like Kaiser Wilhelm II before me, I fancy my own place in the sun.

Mid-week she lost her favourite pen. It was a nice one, a present bought by a dear friend, and it was her favourite shopping list-writing tool. We have had the house turned upside down but cannot find it anywhere. It could have been lost anywhere between Canterbury in Kent and Feltham in Middx.:  Approx 88 miles, according to Google Maps. The pen is fitted with a tracking device, but you have to clip it to your top pocket before you can actually hear the signal it sends out. The battery on the tracker last up to 4 minutes. Some have said this is a design fault. I have poo-poohed such suggestions. Me and a chinese mate attached a microphone to a broomstick and went and sat in his rubber dinghy just off Erith Marshes, dangling the mic in the water. Oddly, nothing has turned up yet, but I’ll let you know.

Anyway, the point of this tribute to my very own Leader of the Opposition is to wish her a very happy birthday. Sad to say, m’lady, you will never be as old as me, and don’t you enjoy telling me so ? One of us has a very significant, important and depressing birthday this year but unfortunately it’s not you. So enjoy it while you can, and as is traditional on these occasions: it’s your round. xx 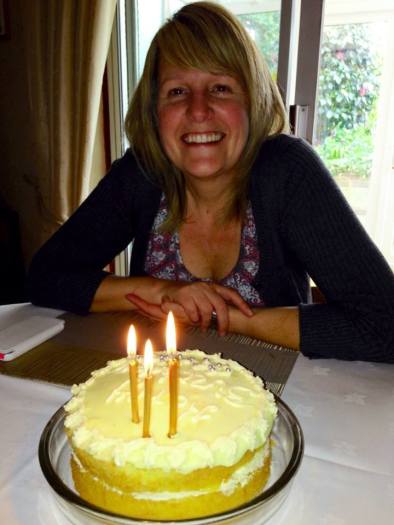 ** correct at time of going to press.

Still enjoying a Rock & Roll lifestyle, even at my age. 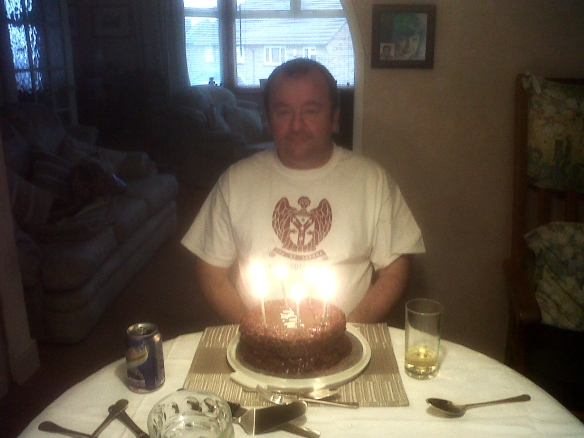 Full of the Joys of Spring, as Usual (note the accompanying can of lemonade)