We made Amsterdam in good time, avoiding the chaos which was ensuing at Heathrow and Calais and arrived at the hotel in plenty of time for a sundowner or four. Entering the small lobby of our lodgings, we were greeted by two charming, smiley young women who handed us a glass of champagne and gave us the lie of the land and the tale of the tape: Help ourselves to what we wanted from the lobby bar and the room mini bar, and enjoy ourselves.

Home to the the Dutch wing of the family

Although confident that we would, I turned to notice that some of our fellow guests had an unhealthy head start on us. Three couples in particular caught the eye, partly as they were blocking the view of the bar. All six of them were heavy-boned, and were busy helping themselves to the pleasures of the drinks cabinet. All were around fifty years old. Two were clearly Brits, as they were drinking pints. There was one guy in a blazer, chinos, blue chambray shirt and a baseball cap turned backwards on his balding head. Not sure where he came from. His wife was very loud: hmmm…still no real clue.

The final pairing came from California. I only found this out later as it was all the wife spoke about, along with her diet and the “fucking French”. All this while her red-faced husband devoured bottles of Argentinian Merlot and slid down the back of the chair, quietly grinning to himself. 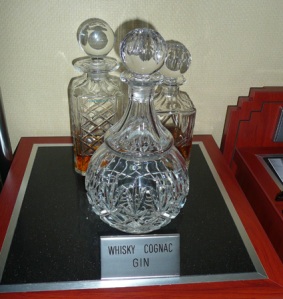 A nice mini bar and all that, but where are the lemons ?

Having been shown our room, had a quick swig and freshen up, we returned to the lobby, en route to seeking out a cool pint of Amstel in the many bars outside. The six juggernauts had hardly moved from their positions of earlier, though the females were now seated in lounge chairs, demolishing plates of food. We left.

A convivial stroll around the pretty town and it’s bars, following the long drive had left the pair of us a tad weary, so after two or three hours we shuffled our way back to the hotel for a nightcap. The six lobbyists had been joined by three or four other Americans, in the far corner of the room was a French couple, keeping themselves to themselves, him reading Le Monde, she watching him reading Le Monde. Finally at the concierge desk, a retired couple were demanding what the weather was going to be like tomorrow. I thought they were Dutch at first, but it turned out they were scousers. It’s the phlegm, I guess.

We took our seats in the middle of all this and, glasses charged, proceeded to people-watch and to listen in. The Yanks and the Limeys seated amongst them had been for varying lengths of time stranded in Amsterdam by the volcanic ash cloud. In between visits to the bar the Americans took turns in visiting the two pcs situated in the corner of the bar and looked for flights out of Schipol Airport, news from home or weather reports. The Brits, when it was their turn, looked at the BBC website and at railway timetables and ticket office sites. All had pretty much given up hope of leaving soon, and none were happy about it.

The chat was of insurance, California, Argentinian wine, politics, cheese, diets, then the fucking French. At that, the pleasant French couple left. They’d been chatting quietly (as far as my limited French would allow me to understand) about how much these people were drinking and eating. I have no idea what the Scousers were talking about.

The chatter continued: The hotel elevators were too slow for one woman, the bathrooms too tiny for the British glandular-case (I could clearly see why). “Oh honey” announced Mrs California, “the bathrooms are positively palatial compared to ours in fucking Paris”. Guessing that the chat wasn’t gonna improve any time soon, we retreated to our room.

The pattern repeated itself the following day. Our un-happy band of brothers and sisters were decamped in the lounge, devouring all before them, like a plague of fat, boring locusts. Morning, noon and night. The original big six were occasionally joined by other refugees of the airline ban, exchanging war-stories and escape plans. Cast your mind back to the lounge bar in The Killing Fields, with groups of various nationals marooned, awaiting the airlift, with nothing to do but wine and whine the days away. In one scene in the movie they try to fake a passport, attempting to fix the photo with urine, in lieu of proper photo-fixer. Fortunately no such drastic measures were needed here. And anyway, if there was a bottle of urine laying around, the fat Brits would have drunk it.

We spent our days visiting museums, bars, shops and restaurants, buying gifts for the kids, cheese for us and tulips for the garden. Each time we returned to the hotel, more refugees had arrived, the static six, who were now experts in everything Amsterdam and Airline-related were holding both court and enormous gins.

On Wednesday morning I went down to the lobby for breakfast and realised something was wrong. Either I’d gone deaf or the Californians had left. Sure enough, the ban had been lifted and they’d flown the coop. Somewhere over the Atlantic, some poor sod was being bored shitless by a man wearing a suit and baseball cap, accompanied by his fat, frightful wife. The Brits had apparently got tickets on the train to Calais, via Burger King, then onto London. I almost punched the air in gratitude.

Our last day was spent in peace and quiet, free to wander the streets and explore the drinkeries and eateries, yet content in the knowledge that we could return laden with yet more cheese and flower bulbs to our hotel which now looked like a hotel, not a 4-star refugee camp. We enjoyed an evening meal in town, a couple of drinks in a quiet bar and returned to the lobby for one last snifter before retiring to bed. All very pleasant indeed.

We left by car the following morning having spent the oddest few days in Amsterdam. We left the little boats putt-putting along the canals, our hotel staff re-stocking the lobby bar, and we left 45 quids-worth of cheese in the our room fridge. 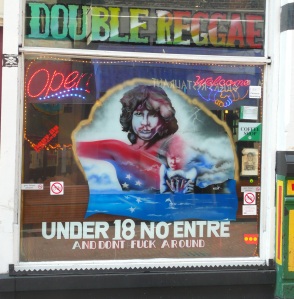