As I always say, them welsh women know style when the see it. Here’s four of ’em wearing the hottest T-shirts in town.  Fablaaaas.  Available at a top website near you  (that’s the T-shirt, not the women) 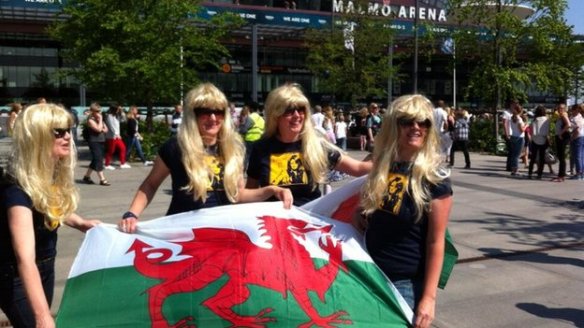 What a beautiful day.

I defy you to look and listen to that without feeling great. I thought you’d like that. There wasn’t a particular reason I played it, it just fitted my mood at the time of writing. The sun is out, the bumble bees are doing their thang and the world seems a nice place. As someone quite rightly once wrote: Spring is sprung, the grass is ris. I wonders where the birdies is.

So, back to that video. Doesn’t it just bring a smile to your face ? Darts were just one of my favourite bands during the late 70s/early 80s. Fantastic upbeat covers of great doo-wop and rock n roll numbers, tickled-up and delivered in a mad manner with singers like Den Hegarty and Kenny Andrews (one replaced by the other) and in such a way that you couldn’t stop smiling. The length of Rita Rays’s skirt in that clip alone should make some of you sit up and take notice (and yes, I’m talking to you ! You know who you are. Safe flight back).

Anyway, things could be worse. As mentioned earlier, the temperatures are soaring here in the Potting Shed, and the weather outside isn’t bad either. Have been busy designing and printing t-shirts for a welcome glut of customers. This sudden interest comes mainly courtesy of the Eurovision Song Contest which attracts a particular section of society. It also, happily for me, happens to be the main interest of my friend Willie—a former colleague of mine— who now runs the most popular ESC website in the civilsed world and Scotland. Thanks mainly to Willie’s input (steady!) I’ve been flat out printing up skinny-fit tees sporting images of slightly camp singers and sparkly “Douze Points`’ slogans. These boys like ’em tight & bright, though not sure about the T-shirts.

Willie asked me to supply some tees for him and his team for when they travel to Copenhagen, Denmark for this year’s competition. He wants logos on the chest and across the back which leaves little room for anything else. Those (2) of you who have ever purchased a shirt from me will know each comes with my small logo (above) printed on the back. With Willie’s multitude of logos and slogans it’s proving difficult for me to know where I can place my company motif. In the end I had to call Willie and ask him where he’d like me to stick my fist. I quickly put down the phone when I realised what I’d said.

So the sun’s shining, I’m working (nearly said earning— but I am working) and I’m making inappropriate suggestions to gay young men. Perfick !  What’s next ?

Anyway, since we last met I’ve had a major malfunction in the iMac Department. One day not long ago I was sitting staring blankly at the screen, when all of a sudden the screen stared blankly back at me. Very blankly indeed. It just switched itself off and refused to switch back on again. I tried all of the combination of reboots and key-strokes (some involving owning 13 fingers) to no avail. Called in my mate Mike who knows everything about Apple Macs. EVERYTHING. Ten minutes after arriving he pronounced: “IT’S FUCKED” . I had two choices, buy a new one or take it to the menders down at (sigh) Bluewater. A new one plus all the gadgets of Photoshop etc would set me back close to two grand. Oddly, I had mislaid my spare £2,000 for the minute, so I decided to get my current one fixed.

Apparently it was my hard drive. It was fucked. (told you my mate Mike knew everything). But just 4 days later they called me to say they’d replaced the offending part(s) and for the cost of an hour’s shop in Sainsbury’s I could come and retrieve it.

Back home it did, indeed, work. It worked better than it ever had before. Unsurprisingly as it had nothing on it. No photos, no designs, no photoshop, no browsing history (phew!) nothing. So, until MY MATE MIKE returns and brings all sorts to insert and tells me what new stuff I need to buy, I am left to the perils of a laptop. And my eyes aren’t what they were.

I didn’t really mind about the lost pics. I had backed up a lot just before christmas, and the new ones would only take a week or so to re-do. It could be a lot worse. I could live in France.

BUT WAIT A MINUTE !  BOLLOX!! MY MUSIC !!  While I sit here tapping away writing a blog that only you and your mate from work read, I often drift along with my very old iTunes collection tinkling along with me. I went into a cold sweat. No iTunes meant no Status Quo, no Squeeze, no Darts. No iTunes meant NO CHAS & DAVE !! Some things are not replaceable (well yes I know they are but humour me for dramatic effect’s sake).

It was then I became very very happy (see, you knew I’d get around to it in the end, didn’t you ?). And this probably demonstrates just how little I know about how computers work. ALL of my music was still there. ALL of it (Well all the stuff I’ve ever bought as downloads, and I actually did once back-up all my old cd uploads).What a relief. As I write this sentence I’m listening and swaying along to Gilbert O’Sullivan (Alone Again, Naturally— that’s both the title of the song and my personal situation), occasionally typing in time, if not in tune, to the music. I even have a folded T-shirt on my head doubling as an over-sized flat cap. Ok, that last bit is a fib.  It’s wonderful: When you think you have lost something which will take a long long time to replace, then you find it. Bloody Marvellous !

So that was the very moment that I rediscovered Darts. Or to be more precise the time when I discovered that I must have rediscovered Darts some time again and downloaded some of their singles. So much fun. Listening to Daddy Cool brought an instant smile to my face. Come Back My Love had me hopping around the room like a mad thing. And when I listened to the tune in the next video it brought back fond memories of five of us getting a cab up to the aforementioned Vagabonds drinking hole. It was during the 80s and we may have had a little drinky. For the whole of the 5 mile journey we sang “Duke, Duke, Duke, Duke of Earl, Duke, Duke, Duke of Earl, Duke, Duke, Duke of Earl” in a drunken reel, then transferring the rhythm and tune to everything and anything else that came up. “Where, where, where, where’s the pub ?” etc. You get the picture. In our sodden state we thought it was hilarious.

When they cab pulled up outside the club, we poured ourself out onto the pavement. One of us stuck his head thru the open window and asked how much we owed.

Enjoy the music and the weather. And a rare use of the word “Dukedom” in a pop song.

Not since The Rubettes appeared on Top of Pops will you have seen miming to a backing track done quite so well as this. It makes you thank the Great Beardy Being up above that the boys in the following video are defending us in the Gulf of Somewhere, not representing us in the Eurovision song contest.

All good fun though.

You don’t often see miming anymore. The audience of pop shows are too discerning, and anyway, you don’t see shows like TOTP any more, decent shows having been replaced by Omnibus episodes of Location Location Location Location Location, Come Snore with Me or Fuck It! . Stakes are high in the music industry nowadays. One dodgy performance could mean billions of lost downloads.

The dreaded Eurovision Song contest will again soon be upon us. Once Terry Wigon decided he’d had enough of the block voting, any fun to be had pretty much disappeared. I freely admit to spending many a happy Saturday night each spring, chuckling away to the wit n wisdom of Terry as he ripped in to the acts, their costumes, and their dreadful, dreadful songs. For the past few years it has been presented on the BBC by Terry’s fellow Irishman and reluctant celebrity Graham Norton. Eurovision is a poor imitation of its former self.

We can thank the competition for ABBA, and rue the day it introduced the world to Riverdance and the morbidly offensive Michael Flately. The music has always been biblically average, the fashions tragic, and the judging makes FIFA or the IOC seem positively fair and above board. The Russia/Ukraine dynamic will be worth a watch at the very least this year. But none of this really ever mattered as Wogan was as cutting and funny on commentary as Norton isn’t. With the correct amount of Guinness, single malt whisky, chicken dansak and convivial company a Eurovision party was a great source of ironically camp mirth and merriment. And you could always run a book on the outcome while giggly along to Terry’s witty, if mildly xenophobic banter. Norton likes making himself laugh, which he does a lot, but laughing out of context is no real substitute for his predecessor’s class.

Of course to some sections of society it still is one the highlights of the year. The ESC is, rather unsurprisingly, hugely popular in within the gay community. A pal of mine (a confirmed batchelor) runs an extraordinarily popular blog dedicated to Eurovision, which tens and tens of thousands of people visit to find out everything they ever wanted or needed to know about the song contest. Now while I’m not suggesting that everyone who clicks onto that site catches the other bus (I just clicked on it for research purposes, honestly) it’s clear that there is a huge appetite out there for this mincing wince-fest.

The newly-admitted eastern European states have embraced the contest with their huge hairy arms as a chance to express themselves. Where once they only had the excitement of annual Soviet Bloc cabbage-throwing competitions or acid rain drinking contests, Eurovision has given them the chance to show the watching millions how their prog rock and endless folk ditties can compete with the worst that Europe has to offer.

So no, it won’t be on my must-view list this year, I’m afraid. I’m not Irish, I’m ball-breakingly hetrosexual, there’ll be no Sir Terrance W and no song this year (or any other) will ever match My Lovely Horse. They really should have entered it, you know.

Big it up for Channel 4 who won’t let me embed the Father Ted video, but you can see it here.

and now a word from our sponsor…