I am saddened to hear of the poor health of Bill O’Hagan: Sausage King, journalist, colleague, friend. A drinker of Biblical proportions, and a genuine wit and raconteur.
Speaking from his hospital bed to a friend at the weekend, Bill declared he was “on his way out” and is to move to a hospice at some stage this week. It would seem all that fun is finally catching up with him.
. 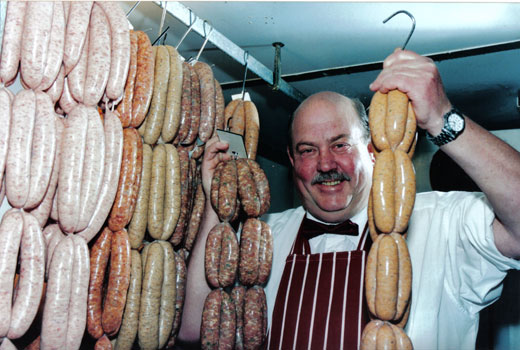 Bill is and has been a man of many parts, some of them still working. Everyone who ever met or worked with him will have their own O’Hagan story, and sadly I feel the obits column will soon be full of them. Many of them will ignore his wondrous sausages and long career working in Fleet Street but concentrate on his drinking. I have to tell you now that my stories and memories are no different.
.
Some time during the late 1980s I once (well, quite often actually) found myself and a mate in a quiet little drinking establishment called Vagabonds, in New Fetter Lane, near Fleet Street, London. We (my friend Mr Sapsted and I) would decamp there because the pub we had been drinking in earlier had closed at 11 o’clock and we hadn’t finished what we were doing. They were always doing that to us.  It always played out in the same manner: We would arrive in the bar none-too-bright at some stage past 11.00, John the barman/owner would hold up his wrist, point to his watch and shake his head in a “what fucking time do you call this” sort-of-way. We would apologise, promise to spend some money in his bar before 11.00 next time, promise even to join the sodding club and pay the membership fee next week.
.
We never did, but we weren’t the only ones. I don’t think I ever met anyone who was a member or went into the club while there was anywhere else still open. They came from Fleet Street, Old Fetter Lane, Canary Wharf and Hugh Street Ken. From anywhere that a newspaper had been exiled. They came all through the night after, and sometimes during, shifts. But nobody ever paid to join. And John the guvnor swore at them all, asking “what fucking time d’you call this ?”
.
Anyway, on this particular night at around midnight, the door burst open and in ran Bill O’Hagan and who, without so much as a “good evening” but with two and a half bounds,  was onto the small stage to the left of the bar.
.
(Some readers may be interested that on this stage was a stacked a collection of stereo systems and amplifiers and which, when the correct buttons were pushed in the right order, and the requisite leads were inserted into the proper holes, would play instrumental versions of popular and current musical numbers. No-one had ever heard the word Karaoke. Not down our way, at any rate. Other may also like to know that it was on this very stage that I sang a duet (ish) with a visiting member of The Drifters. One of us was very good. I’ll tell you all about it another time.)
.
Back to Bill in the bar.
.
Shouting the question “How does an Irishman pull up his socks ?” he proceeded to undo his trousers, letting them drop to the floor. He stood, quite literally, stark bollock naked in front of the stunned drinkers propping up the bar. He then bent over, gave a quick tug on his socks, then pulled up his strides and re-buttoned them. Without further ado, and with not another word, he ran out of the door. Even John, the aformentioned (Irish) barman was rendered speechless. Bill was never seen again that night. Not by us, at any rate. Who knows how many other boozers were to witness his tackle that night. We may not have been the first, We were probably not the last.
.
That’s how I shall choose to remember him. Apart from another umpteen occasions when he’s made me laugh out loud. Many involving him calling a friend/wife/employer a telling them “I’m gonna be late and I’m gonna be drunk”. And he continues to make me smile. While researching a couple of bits for this piece, I stumbled upon this entry for him on IMDb. How the fuck does O’Hagan get an entry in IMDb ? I want one.  It’s not of the greatest length, but it does sum him up rather well.
.

.
Good on yer, Bill. Apart from anything else, I have met met a nice South African.
.