Spent all day crying, watching BBC coverage of the D-Day Vets. So proud of those old guys and they are all so humble. Wonderful stuff. I would never fight over oil or for spurious reasons to kill people, but if the Nazis ever again threatened our shores I’d like to think I’d do my bit.
70 years on, we’ve started voting-in racists, bigots & homophobes. Might as well have let Hitler in. What a waste. 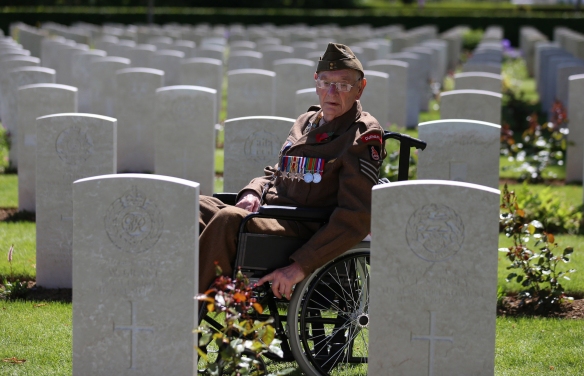 So they’ve won. I shouldn’t give up so easily, but for the past four-or-so years I’ve written at length (and incoherently) warning about the rise of the Right. I may not be right about many things, but I was spot on about UKIP and their mob.

Any humour I ever possessed came from a smidgen of hope. I no longer have that for this country. I don’t have the energy to fight against what’s happening. I’m an out-of-date old leftie who’s views are no longer relevant, so I shall leave it with you all. By the time most of you read this, you’ll be under a government more right-wing than Thatcher’s — and when I started this blog I’d have never believed such was possible.

So goodbye and thanks for reading and commenting. If you don’t care about living in a liberal (small ‘l’ )society, only one other thing is important: Please adhere to Greaves’ Rules (they are posted in this blog for your enjoyment) and use whichever heavy implements you can on the local nazis —you know who they are (so that’s two things). 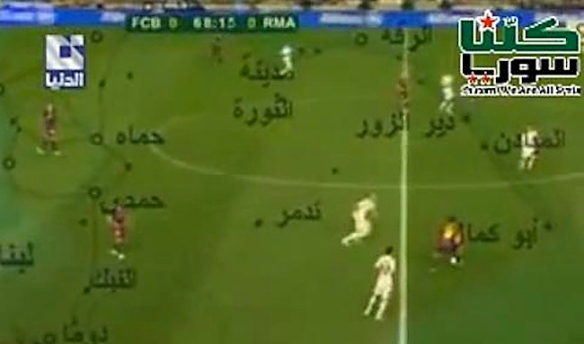 Without a hint of irony, Addounia TV superimposed a map of Syria on a screen [above) to show how Lionel Messi and his team-mates, representing smugglers, had kicked a ball, representing a weapons shipment, into Syria from Lebanon.

The subtle signals to rebels were transmitted when Barcelona played Real Madrid in December, said the channel, which is owned by a cousin of President Bashar al-Assad. It did not trouble viewers by revealing Barcelona’s motives for the exploit.

“First we see how the guns are brought from Lebanon,” the presenter comments as one player passes the ball. “Then they cross into Homs and give the weapons to other terrorists in Abu Kamal,” he added, referring to rebel strongholds in Syria.

Messi’s final flick indicates the successful handover of the weapons to their destination in eastern Syria, he said.

Bizarre it may be, but paranoid conspiracy theories are common coin in the deeply divided and conflict-ridden state. 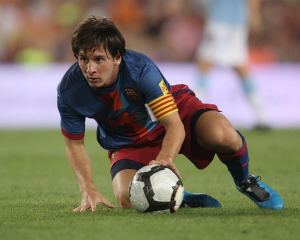 This is not, of course, the first time vital messages were sent by strange means. There’s the famous case of The Daily Telegraph Crossword during the build-up to D-Day when all the codewords which were to be used in the invasion of France – Omaha, Utah, Neptune – started appearing as crossword answers in the daily newspaper.

Let’s not forget the time when The Manchester Grauniad published a free wall poster for your bedroom showing all of Montgomery’s tank movements in the run up to El Alamein, The Daily Express front page on the morning of 9/11 read “Does Flying United Airlines Give You Cancer?” and Charlton Athletic’s tactics were so close to the attck formations of  Mussolini’s Republican Guard that Churchill considered disbanding the club. Don’t believe me ? How dare you !

So before you poo poo the reuters story above, take a butchers at England’s crap running between the wickets next week in Sri Lanka and ask yourself: what are they trying to tell us ?

They may be trying to tell us that they don’t know what they are doing. Or maybe they are signalling to militants in Yemen ?