Having deserted t’BBC Breakfast program (eey oop, here’s t’beenees nooz) I’ve been enjoying a couple of week’s worth of The Today Program where, for reasons known only to themselves, journalists are allowed to report on the latest world events, the economic crisis, wars, famine and political intrigue, occasionally punctuated by a sports report or 20 seconds of guessing at the weather.

The way they were. The original BBC Breakfast crew including the late, great David Icke. Whatever happened to Uncle Frank ? Dirty Boy !!!!

Spend an hour watching t’Breakfast program, then switch over to listening to the radio and you’ll think you were listening on a different day. Where, please tell me, are all the “Corn Flakes can give your child rickets” stories ? What about the “What comes first on a scone ? Jam or Cream?” exclusives ? And there’re no interviews with “last night losers on Strictly”. And thank fuck for that ! Radio 4 sticks to the stupidly crusty old news program format of bringing you the …er…news. There’s not even any vox-pops from the streets of Wigan, for christ’s sake!  When I worked for a living for the highly respectable and reputable newspapers of Fleet St, the Today program was required listening, and this was so for the best part of 30 years. Since I do sod-all nowadays I lapsed into Sian and Charlie, Bill and Suzanna’s grasp, My mind turned to mulch because of it. Well that stops here and now.

Woken up by nightmares last night, I switched on the BBC World Service in the hope that the dulcet tones of a foreign correspondent talking to me would enable me to drift off to sleep (it always used to work – especially in the office). Sadly for me the opposite happened. Some bloke who’d certainly never darkened the sweet red couch of t’BBC Salford studio, was explaining with ultimate clarity and menace what was happening and going to happen if (and when) the Greek economy threw a seven and went belly-up sausage-side.

So his tale went: the Greeks pull out of the Euro and immediately, people’s savings lose two-thirds of their value and there’s a hiatus until they sort a new currency out. If that can happen in Greece, the Spanish people will calculate that it can happen in their equally-fragile economy as well. Then the Italians, and so on, and so on…

Intelligent Greeks, Spaniards and Italians will see that situation coming and they don’t wanna see their savings go down the toilet. So there’s a run on all banks as anyone with any money left at all withdraws all he has and shoves it under the mattress/missus. The economy collapses, the Euro-Zone closes due to lack of interest, Presidents Obama then Romney instigate Part II of the Marshall Plan and 30 years from now we all star in a documentary by an ageing Robert Peston explaining how poor we all were in 2012/3.

The alternative to all this, of course, is the German plan of austerity: raise the Greek taxes, cut all welfare and public expenditure for about, ooooh, ten years or so. It’ll be tough “but we put up with it when we took on East Germany andwecameoutstrongerontheotherside soyoulotbetterputuporshutupandtinkyourselfluckythatyou’renotstilloccupiedyouungreatful
littleshitsandsnywayitwasyoulotnotpayingtaxwhichstartedallofthisinthefirstplace.”

Of course, that’s the argument: Greek teachers and bin men scrimping on their taxes are the ones to blame for the state of the continent’s economy. The Euro would be strong, the Banking industry would still be making fortunes if it wasn’t for all you bastard nurses and Public Sector workers borrowing what you couldn’t afford, trying to cheat the Inland Revenue and then having the balls to expect a pension at the end of it. Jesus! Those poor men at JP Morgan and such places spilt their own blood for you, some of you walking out with less than a $32 payout. How is a man supposed to live on that ?

Perhaps I’ll go back to telly where all I have to worry about in the morning is that the heavy rain has affected this years asparagus crop ?

Still. it’s not all bad news. I actually made £95 quid this week. A combination of selling Tee-shirts and predicting the odd correct score means I’m flush, for at least a couple of hours. I do have options. I could give it to The Incumbent to spend on food down at Sainsburys’. It’ll take 15 minutes to spend and £95 quid’s worth of food lasts about 3 days round here; There’s a Ralph Lauren cotton sweater at Harrods going for exactly £95 but I’m not sure they do my size (quiet at the back, please!).  I could pre-order from Amazon 11 copies of Joey Barton’s autobigraphy (and still have change for a bag of chips). Like Hitler’s Mein Kampf this will surely mostly be written (or dictated) while in incarceration. I can’t help thinking that’s not where the similarities will cease. Although, I’m told, Hitler had a good command of English unlike the captain of the Waffen QPR.

8 quid seems a lot of money to me to waste on a book by a complete arsehole, even though many buy Jeremy Clarkson’s books. Times are tough, and I should spend my cash wisely.

I am going online today to reserve a ticket on the Water Chariot to take me from Limehouse Basin to the Olympic Park. I’ll have to go on my own, though. That’s £95. London to London. One Way. I’ll have to get to Limehouse first, of course, but can you think of equal value available today ? You could probably buy the Parthenon for 95 quid.

This stuff writes itself. 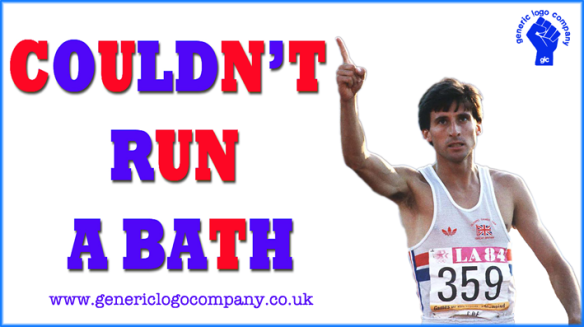