In another of an occasional series of time-saving tips, I’d like to let you in on a little secret : 44″ Chest is a dreadful movie. Shocking. Awful. Nasty. Possibly the most disappointing film I’ve seen for some time.

Being a huge Ray Winston and John Hurt fan I was really looking forward to it, only to be left open-mouthed at the pointlessness, nastiness and worthlessness of it all. What a real shame. Sexy Beast II it ain’t. I can’t remember what I paid for it, but if you hang on for a little while you’ll be able to buy a ‘nearly new’ version on Amazon for next to nothing. (I’ve already posted my customer review). It’s a shocker.

Sexy Beast gave us the great Don Logan, possibly the best British gangster ever portrayed on film, played by Sir Ben Kingsley. His performance never ceases to amaze and enthrall me, especially the perfection and precision with which Kinglsey manages to pull off a cockney accent, right from his opening, immortal line “I’ve gotta change my shirt, I’m sweating like a cahnt”. Bloody well done for a Yorkshireman. I’m afraid the great John Hurt, (again from Yorkshire), fails to hit the mockney-mark in this lame follow-up, and he’s not alone. The ususally brilliant Tom Wilkinson from, er, Yorkshire borders on a Meery Puppins cockney performance all the way through. Stephen Dillane sounds ok as a Londoner, but then again he was born there. No, don’t waste your money on this movie, it’s horrid through and through, and the accents don’t help either.

But why should we expect Yorkshiremen to be able mimic the accent of The Old Kent Road, or Whitechapel? Accents are bloody hard to pull off. Just ask Russell Crowe. Well actually don’t, cos the big Aussie doesn’t like talking about it. DON’T LIKE IT AT ALL, MATE. He got very pissy with a radio interviewer who thought he sounded Irish when playing Robin Hood, the eponymous hero in Ridley Scott’s new blockbuster. What a load of old tosh ! He sounds Scottish. Or Lancastrian. Or Yorkish (perhaps Tom Wilkinson was his speech coach?).

Now given that we have no idea which accent or dialect Robin of Loxley actually had, we cannot say for sure that he didn’t sound like Groundskeeper Willie or Geoffrey Boycott or Roy Walker, but it’s safe to say he probably didn’t change his accent four times-a-day, depending on who he was talking to (as cunning as he was). What does a Lincolnshire accent sound like anyway? Buggered if I know.

Dodgy dialects have long been a source of amusement. Dick Van Dyke, of course, is the main culprit to whom everyone refers, but he is by no means alone when it comes to comedy accents. For starters, Keanu Reeves in Bram Stoker’s Dracula takes some beating for a crap Englishmen, James Coburn’s Australian in The Great Escape is one of my favourites (“what ye doin wiv me coat, mate?”), while Mickey Rooney’s portrayal of the Japanese landlord in Breakfast at Tiffany’s borders on the downright racist. The least said about Tom Cruise’s Oirishman in Far and Away, the better.

Why do they bother? Take a leaf out of Sean Connery’s book and just be yourself. Who can ever forget the Scottish/Russian submarine commander in The Hunt for Red October ? “Forty yearsh I’ve been at shea. A war at shea. A war with no battlesh, no monumensh… only casualtiesh.” Spoken like a native.
And how about his brilliant Portuguese-Jocko Warrior in Highlander ? (acting opposite a Frenchman playing a Scotsman) “With heart, faith and shteel. In the end there can be only one, Msh Moneypenny”. His Irish accent in “The Untouchables” is a thing of wonder and mystery. I defy any budding Henry Higgins to put a location to it, but I suspect it was born somewhere just outside Edinburgh.

I always thought Cary Elwes in the brilliant Princess Bride never got the credit he deserved, and as I’ve never seen (or unlikely ever to see) Bridget Jone’s Diary I can’t pass comment on Renee Zellweger’s version of the Queen’s Own. Is Hugh Laurie any good as an American in House? or did Domonic West sound authentic in The Wire? I can’t tell. Gotta be better than Bob Hoskins was in either Who Framed Roger Rabbit ? or The Cotton Club.

So in this world when there are rows about white men playing Othello, when the chinese community in Australia are up in arms over who’s portraying their War Hero, or uproar when Nick Cage is cast in a role which could have quite easily been given to a proper actor, why don’t we all agree to let anyone play anyone on stage or screen? Let’s just forget the blacking-up, or the crap makeup just as long as the role is a convincing one and acted well (and that’s Jude Law fucked on all counts.) And let’s rid ourselves of this obsession with the right accent for the right part. For example, I would like to play Rick Blaine in Casablanca with a South London lilt.

“Louis, I fink this is the beginning of a beautiful friendship. Nah, put the kettle on, you cahnt” 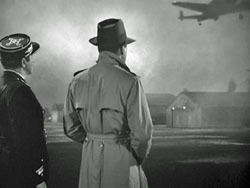