Advanced warning to my friend who said she read and enjoyed my blog, “but not the boring sports stuff”. Please feel free to scroll down to the next post, it’s all about music.

Don’t you think it would have been better if, when Tom Williams went into that Clapham Common joke shop, he would have gone the whole hog? For those not-in-the-know, Williams plays for Harlequins Rugby Football Club and is the centre of a scandal having been found to have bitten on a joke shop blood capsule, thus faking a blood injury so he could be substituted. I’d have loved to have seen him emerge from the bottom of the ruck with a fake arrow through his head and one of those rubber nails though his thumb. If you’re gonna feign injury, have a bit of style about it.

I know of a club in Wales who used to have a one-legged bloke in their Vets team. He’d play on the wing wearing his plastic leg and, at the pace that over-35’s rugby is played at, got along just fine. On one occasion, with the opposing team’s consent and cooperation he removed his artificial limb whilst he was laying at the bottom of a pile of players, and a team-mate stuffed raw liver into the now-empty leg of his shorts. The play stopped, the scrum of players untangled and broke up, leaving this bloke on the floor, screaming in mock-agony. The only guy on the pitch who wasn’t in on the joke was the referee, who duly fainted. Now THAT’S style.

The most worrying thing about the Tom Williams affair, or Bloodgate as the press are calling it, is the complete lack of shock or surprise shown by anyone in world rugby. Apparently feigning a blood-injury is commonplace and what are we all bleating about? Tales of England physios opening up stitches on a player’s old wound soo he could come off the pitch for a fresher player, teams smashing blood capsules into their scalps have filled the sports pages this week. Has it come to this? I listened to a rather gleeful soccer pundit on the radio who was beside himself that at last, the smug holier-than-thou rugger-buggers had finally been exposed for what all footy fans had thought for eons: that they were as corrupt and dishonest as anyone involved in the round-ball code. It’s difficult to argue against. How can we watch the Six Nations Championship this year and believe any injury we see, short of decapitation? I have a feeling I may not bother.

So where does the sports fan turn to for clean, unsullied, cheat-free fun? Cricket? Remember Hanse Cronje, the bookies runner? Mike Atherton’s dirty pocket; or any number of Pakistani indiscretions on and off the pitch? Nope that’s out. How about Track and Field? For every Usain Bolt or Paula Radcliffe, there’s a Ben Johnson or a Dwayne Chambers waiting to happen. Horse Racing? (Keiron Fallon); Baseball? (Barry Bonds) Cycling? don’t even go there.

There is always soccer, I suppose? I mean it. Perhaps that’s the one I should watch because at kick-off no-one should be under the slightest illusion that any of the 22 men on display has any intention of playing within the rules if he can possibly get away with it. It is a game based on cheating, on conning the referee, on maiming the opposition, on getting fellow professionals sent off the field of play. It makes good tv and the authorities not only applaud it, condone it, they actually encourage it. They must do. How else could it carry on like this if UEFA or FIFA or the FA or whoever did not support this rotten, murky, corrupt shambolic excuse for a game of sport?

Arsene Wenger is fuming that his player Eduardo may be punished for diving in the penalty area and thereby conning the ref into awarding a penalty. YOU BET HE’S FUMING. Every single player dives given the slightest opportunity to obtain a free-kick or a penalty, or to get an opposing player sent off or booked. So why has Eduardo been singled out for punishment? Have the authorities finally had enough of this integral part of the game? Of course not. Sadly for the Croatian, he’s so bad at diving, it was such an obvious cheat that even UEFA can’t turn a blind eye to it. They have to go through the motions of being seen to do the right thing. If they were serious about stopping the cheats they’d have shut down Seria A, La Liga and the Premier League years ago. Lee Bowyer, Drogba, Klinsmann and the rest of them down the years would long be behind bars, or at least have been banned from the game after their first match. 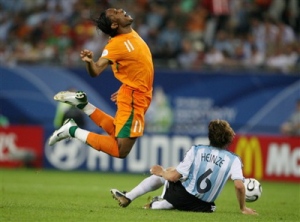 So I have no sympathy when a mate moans that his team “was robbed” through a penalty-that-never-was, or because the full-back should have never been sent off for a foul that didn’t happen. Sod them all. All of them are cheats. All of them, and as long as you go to a game knowing that, football is almost an enjoyable game. The score doesn’t matter, just watch the play-acting, or the acts of violence that pass for a sporting past-time. It doesn’t matter who wins or loses or how, just sit back and watch the show and see if you can spot the young lad, new to the game, who hasn’t quite got it yet, trying to play them game as written in the rule book. Fret not for him, he’ll come around in the end. In seasons to come he’ll be rolling around the penalty area, screaming for the magic sponge after being felled by an invisible foot. They’ll probably make him England captain of he’s convincing enough.

Of course that sort of thing doesn’t happen at Charlton. That’s five wins in a row, by the way. It’s a beautiful game.