Oh I’m far too tired to write anything, really. I’m quite knackered having spent 3 hours driving through London. I could have gone around the M25 (as indeed I had on the outward journey) but “that takes ages” and there’s “always queues this time of day” quoth I. So it’s my own fault, really, that I’ve been staring at a Renault’s exhaust pipe for most of the afternoon. But it doesn’t make me any less knackered. Ok, so drop it, will you?

The reason for my drive was to visit one of the few hospitals in the South East I hadn’t been to in the past  6 months. This one was in High Wycombe in …er…Oxfordshire, I guess and the Incumbent and I drove there this morning with all speed. To cut a long story short we ended up in a car park of the ironically entitled Eden shopping centre which was near to the hospital, but closer to a coffee bar which, after 90 minutes on the M25 at Warp Factor 7, you need the services of. I’m no theologian (no, I’m not, honestly) but I suspect when Adam and Eve were in their Eden it didn’t resemble the half-finished set of the Blade Runner remake, nor were they sat on a bench, sipping on their lattes watching the local hooker sort out her diary appointments in between flicking lumps of yet-to-be indentified remnants from her “mink” (probably cat) coat.

As an aside, on the drive up we were surprised to hear an advert in the radio for the Radio 2 Young Brass Award 2012. I didn’t realise they held competition for Brasses nowadays, especially on Her Majesty’s BBC. How things have progressed ! Our girl in the coffee bar was not in the final line-up, but with hard work I’m sure …etc…etc

Not seen in High Wycombe today. Not by us, anyway.

But that’s by-the-by. As we gingerly made our way through the Droogs of Wycombe to the hospital, we wondered if we’d ever see our car again. At least in one piece, complete with glass surround and the traditional tyre in each corner. I really didn’t fancy leaving it all alone for very long here, in this homage d’Homs. I wouldn’t do it in downtown Dartford, and I didn’t wanna do it here. I wouldn’t send my ex wife in there.

For better or worse, the appointment with the doc lasted 1 minute, 17 secs. If I knew then what I know now – that I’d spend over 5 hours on the road for less than two minutes consultation, I might have lost my typically jolly demeanour.

So, as they say in all great holiday itineraries, we had the rest of the day to ourselves. Well, to ourselves along with the multitude of motor vehicles running the gauntlet of the M40, the Marylebone Road and all routes South East. There were only about a million of us. None of us managed a speed about 5 mph. Talk about Falling Down.

The radio was our only escape from this misery. Or so I had hoped. You can probably and rightly surmise that I don’t listen to what da kids are calling popular jazz combos, daddy-o very often, but I am not as out of touch, nor tune, as you might think. That big lass from Tottenham certainly can knock out a tune, no mistake – I just wish she’d keep her embarrassing North London quips to herself (I still shudder when I think of her outburst at The Grammys). But that aside, I had no hesitation to believe she was well worth all the gongs she’s been picking up recently. I just hadn’t understood what a shoe-in she really was. 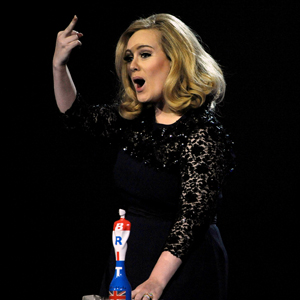 Hour upon hours of music was played , and a lot of it was sung by Adele, but every so often there was another announced “Brit Nominee” or “Grammy runner up” and what a load of old tosh it was. That young ginger bloke with the guitar (it’ll come to me in a minute) is ok, but that’s my point: he’s OK, nothing memorable.  (yes yes yes, I do sound like my dad). Then there’s Rihanna, a warbless who is perfectly fine, even if she does sound like any other artist of her gender from wither side of the pond for the last 25 years. It puts it into perspective how good, strong, special Adele really is. In-the-land-of-the-blind-the-one-eyed-man-is-king sorta thing.

Ed Sheeran. There ! I knew I’d get there in the end. Ed Sheeran’s the ginger bloke !

A lot of this was lost on me last week in the noise surrounding the death of Whitney Houston. I’m not in the habit of speaking ill of the dead for the sake of speaking ill of the dead. No I’m not. However, as sad as I’m sure here demise is and was, I was never a big fan. I’d go so far to say that her brutal treatment of George Benson’s The Greatest Love of All and Dolly’s I will Always Love You needed some serious scrutinizing by someone in the Hague, but that’s just my opinion. I suspect she was as popular as she was because she was a one off (no argument with me there) which is more than you can say about some of the woeful talent picking up the silverware this and last week.

Maybe I shouldn’t be listening to this Radio show ? Maybe I should stick to talk radio where there’s always a good argument taking place. But I hate phone-ins. I hate the public, you see. I always end up veering off the road as I sink my teeth into the steering wheel while listening to Jon Gaunt or Vanessa Feltz opine about some subject close to their hearts (it’s normally ‘chuck the immigrants out’ or ‘scrounging single mums’). How do these people get a job? Vanessa Feltz as a Radio Host ?? Ludicrous.

Why stop there ? We could have former pro boxer , current amateur pugilist and now fugitive from police David Haye presenting Antiques Roadshow; Toby Young as the Political Editor of the Sunday Sun (it would need to be a Murdoch paper, of course); or former Tory MP Ann Widdecombe given her own quiz show on some Murdoch tv station?

Too late, I’m afraid. The last two suggestions are now a reality. Honest. Only Haye is not working somewhere he shouldn’t be, waiting as he is for Fiona Bruce to throw a 7 and let him in. Toby Young is indeed going to be the News of The Sunday Sun Political guru and Widdecombe hosts “Cleverdicks” on Sky . You couldn’t make it up.

2 thoughts on “Droogs and Cleverdicks”