You can bet a pound to a piece of shit that when someone opens a sentence with “No offence but…” they’re about to say something offensive. You can wager your left testicle that if you book Ricky Gervais  to host you awards ceremony he’ll say something that someone somewhere will find in poor taste. That’s why you hire him, right ? Apparently not. The US media (aided and abetted manfully by our own wonderful boys in Fleet St) have launched a thermo-nuclear retaliatory strike on the once-weighty wag for his performance at the Golden Globes.

Now personally I find him hilarious, but that’s just my opinion. Looking around the audience it seems that Robert De Niro and Alec Baldwin do too, though Steve Buscemi looks absolutely terrified of what Gervais may say next. And what about Mel Gibson ? Well, who gives a toss what he thinks ?

Are Hollywood’s finest fair game for merciless and personal attacks by someone who, let’s face it, could be described as a one-joke act ? It’s a matter of opinion, I suppose. How may years can one bloke get by with the “Charlie Sheen is a drunk” routine ? Only time or Charlie’s liver will tell. Personally, it makes me laugh. A lot.

The US media went berserk. Gervais was hounded from pillock to post by critics and columnists condemning his act as hurtful, offensive and/or unfunny. All of which is, again, a matter of personal taste and values, but such was the furore it caused Gervais felt it necessary to appear on the Piers Morgan show on CNN to defend himself. It must be a tv first for Morgan not to have been thought of as the biggest git in the room.

Meanwhile, the Golden Globes get huge play in the media, Gervais’s next tour or DVD will  break all records and someone somewhere will book him again next year to host an awards ceremony. He’s either very, very funny, or he isn’t. He’s brilliant or a blasphemer. So here’s an unoriginal thought: There’s always the off-button if you don’t like him.

The off-button option is one I’ve been using quite a bit recently. I know I’m not alone in finding the BBC’s Come Fly with Me offensive in the way it portrays various minority groups, but beyond the thinly-veiled racism is the one thing that really offends me: It’s not funny. I mean, really not funny. Even though I pronounced this latest offering from Matt Lucas and David Walliams as rubbish having watched the first show, and having read the outrage from similarly enraged viewers, I decided to give it another go this week – to give it a fair crack.

It was even worse than I recalled. Yes it was still racist but it was even less funny than I gave it credit for. I really tried to give it my best shot, but after fifteen minutes of this tosh I found myself yearning for the blessed relief afforded by my grandfather’s service revolver. Fortunately for the sake of my family and the wallpaper, I chose the off-button instead. 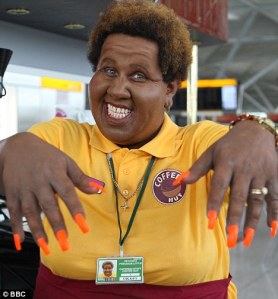 I find David Walliams trying at the best of times. When I am King people like him will be detained under my strict Anti-Smug Git laws. Quite what he has to be smug about Allah only knows. His characters are at best weak and predictable, at worst blatantly stolen or copied from elsewhere. There’s nothing wrong with nicking jokes. This site is made up almost entirely of stolen photos, jokes and videos from other sources. If Humphrey Littleton or Tony Hancock were alive today they’d probably sue me for blatant plagiarism (for this piece alone).

But I’d like to think I’d never use crap 70’s sitcom Mind Your Language as a base for my material, let alone pass it off as original. But again there’s that little button at the top of my remote control that lets me turn him off, almost a fast as he turns me off. This show offends me but I’m not compelled to watch it, any more than you’re forced to read this twaddle.

If only messrs Gray and Keys had known where the off-buttons on their microphones were. These two Sky TV football pundits were caught giving their considered opinions on the appointment of a woman to run the line for the weekend’s Wolves vrs Liverpool match.

Who would have thought two middle-aged, old-school soccer experts would express such sexist feeling towards women in the man’s game ? Women’s groups were up in arms. Karen Brady was apoplectic. Suspensions and apologies followed, and between the giggling, private support and wholehearted agreement Fleet Street’s finest gave the Sky boys a proper going over. So everyone’s offended. You hate Ricky Gervais, I can’t abide Matt Lucas. She wants Andy Gray banned, he wants Russell Brand fed to the wolves. And everyone, EVERYONE would like Frankie Boyle stapled up by his goolies.

Light the torches, hand out the wooden stakes and the garlic bullets. Make effigies of Jonathan Ross and burn them on News at Ten. In the name of Mary Whitehouse, Peter Tatchell or all that’s decent and holy let’s rid society of these dreadful, dreadful people.

Alternatively, switch the sodding telly off. If enough people stop watching them they’ll soon go away. My one-man campaign to get Gavin and Stacey off the air has failed miserably because one fewer to the viewing figures doesn’t make a blind bit of difference. But if enough switch off, from Chris Moyles, for instance, one day soon those that offend your ears will be but a distant, uncomfortable memory, like Bernard Manning or Kenny Everett.

2 thoughts on “Minding Your Language”