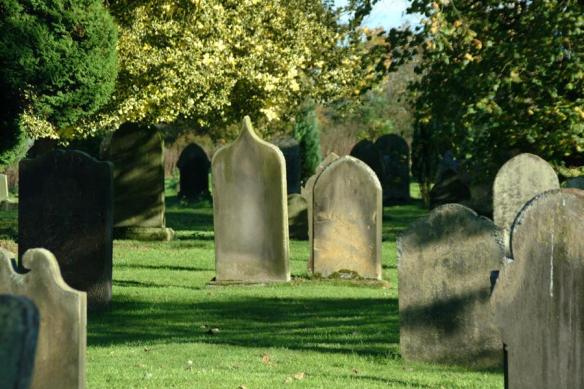 Ever go to a funeral (at a crematorium) when the vicar’s opening gambit was “Christ that’s cold outside, much warmer in here” ?  I did yesterday.

Ever been to one where a whole row of the congregation spontaneously burst into laughter when the organist opened up with “The Lord’s My Shepherd” ?  Don’t ask me why but that’s what happened at the service where I was.

At any of the funerals which you’ve attended in the past, did any of the mourners talk loudly about last night’s television throughout the vicar’s opening address, completely drowning out what he had to say about the deceased ? Or did any think wearing white puffer jackets was de rigueur ? Again, some of those gathered yesterday did.

I’ve watched comedy shows or movies where a hapless hero rushes in late to a funeral service, makes a kerfuffle coming through the door, prompts the back row of the mourners shuffle along the pews, and plonks himself down to listen to the service. Three minutes later he still hasn’t seen anyone or heard anything vaguely relevant to the deceased and it dawns on him that he’s at the wrong service. He leaps to his feet and exits (noisily) back out of the door from whence he came to find the correct chapel of rest. Classic Richard Curtis-type stuff and as hackneyed a sit-com scene as they come. Except this is exactly what happened at this very same funeral yesterday, I kid you not. I looked at The Incumbent, but she dared not catch my eye for fear of giggling. I scanned the room for hidden cameras.

Things started to calm down a bit so I could stop biting my lip. The vicar delivered a lovely service, eulogy, whatever before he read the Committal. As he made his speech of send-off, the curtains gradually drew closed on the coffin and he committed the poor soul’s body to the ground. This is a particularly painful and emotional moment at any funeral service. Certainly was yesterday as he got the deceased’s name completely and utterly wrong. Presumably he was reading from the day before’s notes. I gripped tightly onto The Incumbent’s hand, my eyes snapped shut.  An audible gasp swept through the congregation.

Outside in the rose garden afterwards it was as if nothing had happened. Old ladies thanked the vic for a “luvverly service”, people commented on how wonderful it was that so many had come “to see the old girl off” (though no mention was made of mystery late arrival who didn’t appear to still be here). The missus and I suggested that it had been a service fit for Dick Emery. That fell on deaf ears.

But that’s the thing about funerals: as miserable as you are (or as one supposes you are) there are rarely few repercussions or altercations following what went on during the service. Tell a dodgy joke at a wedding, or get the bride’s name wrong and there’s a massive punch-up in the car park. But at a funeral, wear something more appropriate for a snowboarding weekend than for burying your nan, or commit the body of Violet Hodgson to the ground, when body is that of Elsie Thwaites then you’re all invited back to the house “for a nice cup of tea”.

“Now let us stand and sing our last hymn : “Down Down, Deeper and Down”