Today I finally feel I belong. I feel my place in society is, once again, secure. I feel like I’ve been welcomed back, invited into the game that everyone else is playing. No, it’s not that I’ve got a job or as if any of my emails asking for work have even been replied to. No, I clearly need to lower my expectations on that front. What has happened is that I’ve noticed that my road, and more importantly my house, has finally been photographed by the chaps at Google Street View.

Yes, just 18 months after the Sharp Single, the rest of the country, nay, world debated whether this new technology was intrusive, instructive, an aid to burglars or a gift to estate agents, Railway Cuttings is finally on the map. I think we were next on the the list after the High Street, Ulan Bator.

Go see for yourself: just tap in “Railway Cuttings, SE3” and you’ll see me wearing nothing but tight-fitting rugby shorts, watering my plants. There’s The Incumbent trimming her bush, and if you zoom in, you can see the dent on my front door which got damaged in an altercation with that door-to-door salesmen. Notice also that the window cleaner still hasn’t been.

I dunno when Google drove past in one of their funny little vans, but it can’t have been that long ago – the croquet lawn has a little straw-coloured tinge to it, the duck house is looking spick and span with it’s fresh coat of paint, and those ornamental stone meerkats are a recent edition, so the photos must have been taken within the last month. Yes the old place is looking pretty nice at the moment- both online and in real life.

Inside, I’ve had time to attend to those little jobs which I’ve been meaning to get around to for so long. Thanks to superglue, the front of the cutlery drawer no longer pulls away and drops onto my foot every time I go in search of the bottle opener (which happens more than you’d think). I no longer need to employ a shire-horse to open and shut the patio doors since I discovered the little adjustable screw at the bottom of the window, so it now glides smoothly to and fro.

That irritating bubble of paper in the lounge ceiling (evidence of a bathroom flood some years ago, I suspect) has been cut out, smoothed over and re-painted. Ok, it’s been repainted in brilliant white gloss, where the rest of the ceiling is in yellowing matt (I told you my eyes aren’t what the were) and I’m gonna have to paint the whole sodding ceiling, but it still looks better than it did. Ish. 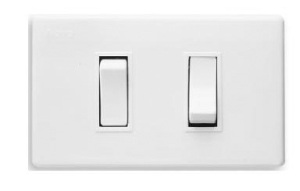 The electrics are still a worry, of course.In the lounge I have the most pointless dimmer switch in Christendom. It’s either on or off, no inbetween. If I do try to dim the lights to create a mood the lights flicker like James Galway’s eyeballs. If you like eating your dinner in original Thomas Edison lighting, this is the place for you. Last year I decided to replace the switch, convinced as I was that the flicker was the result in faulty wiring. The result of my trip to Homebase and half and hour with my trusty screwdriver is that I have a lovely sparkly-white dimmer switch which I can have either the on, off or strobe. Didn’t make a blind bit of difference.

Elsewhere I have a double-switch which controls the kitchen and dining area, and is also linked to the dimmer in the next room. When I moved in this worked as double switches are supposed to: I could have the lights on in the kitchen, or in the dining room, or both, or neither. But having replaced the aforementioned dimmer switch, I wanted to replace the old double switch with a shiny new one too. So out came the screwdriver again, off came the old switch box, and on went the new one.

Except I must have mis-remembered how the original was wired, because I can now have the lights on in the kitchen, or in the dining room, but not both. And not neither, unless you perfect a Bletchley-Park series of combinations with the switches of the double AND the dimmer. Walk by my house when I’m going to bed, with all the lights going on and off in different permutations, and you’d think I was signaling a passing U-boat. If I have people round for a meal there a several interludes when the diners are plunged into darkness as I return to the kitchen to retrieve a serving spoon or another bottle of white from the fridge.

As with most things that are not quite right around the house, I’ve tended to leave them be, and get used to them. I did get my dad up the other week to attempt to fix the lighting situation, but after 3 hours of screwdrivers, circuit-testers and swearing at each other we gave it up as a bad job, But this week I’m gonna see a bloke, who knows a bloke, who knows a bloke (this is a bloke you know) who knows all about electrics. I shall cross his palm with tea and biscuits, and even silver if I have to, to get the bloody thing done. I’ve bought myself bucketloads of Homebase Economy Whitewash to go over the walls and ceiling, Polyfilla will sort out those couple of holes in the walls upstairs, and I will spend several lovely hours ridding my flower-beds of fox turds.

Then I shall contact Google and ask them to drive past again with their camera to photograph a TO LET sign in my front garden (knowing my luck the local kids will paint an ‘i’ between the two words). As no bugger seems to want to employ me (go figure) I shall just have to make my living out of my property portfolio (which currently contains one house). Street View are not due to pass by this way again for another six years but I’m sure they’d come round much sooner to rid their pages of the photo of me holding my belly in and my hose out.

4 thoughts on “The Handy Man Can”