“Ladies and gentlemen, this is your captain speaking. We have a small problem. All four engines have stopped. We are doing our damnedest to get it under control. I trust you are not in too much distress.” 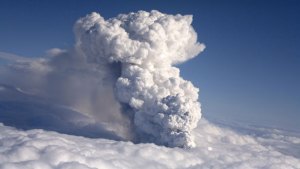 These were the words of Captain Eric Moody as his 747 flew into a cloud of of volcanic dust over Indonesia in 1982. Now I’m not sure which carefully chosen phrase I would have blurted out at the top of my voice had I been on that flight, probably something along the lines of “oh bugger”. Still we need not speculate for too long, as I’m booked on a flight on Sunday to Amsterdam. Well, that’s the plan anyway. As the UK is, apparently, under it’s very own cloud of volcanic dust, it’s not clear if any flights will be taking off by then anyway. I keep looking skywards and all I can see is blue sky and sunshine, but the met office says different and the plume of ash spewing out out the Icelandic volcano has closed the whole of Britain’s airspace.

Now as you will have read here previously, I’m no great fan of flying anyway, merely getting on planes as a means to an end, but ever since I decided to show The Incumbent the delights of the home of the clog, coffee bar and tulip, this trip has been jinxed from the beginning. No sooner had the buttons on BA website been clicked to confirm our flight, their cabin crew announced a series of strikes. The first two caused chaos at the airport, and the third promised to do the same. We spent hours trying to work out alternative routes and modes of transport and decided if the threatened third round of industrial action came (due this weekend) then we’d pop onto the car ferry and drive to Amsterdam.

Only yesterday it became pretty clear that no such action was going to take place and ‘safe’ in the knowledge we would indeed be flying, booked our spot in the car park at Heathrow. When I switched on the news this morning the news of the volcanic ash cloud took a a little time to sink in, it didn’t seem real, but 12 hours later it seems that there’s a very good chance that we will, after all, be completely and absolutely buggered, grounded by this ash. They’re telling me that this invisible cloud is sitting there above us at 30,000 ft, which is where aircraft normally do their stuff (I didn’t know that, as when I’m in the air I’ve usually got my eyes closed and my fingers in my ears, having injected the required amount of scotch into my bloodstream). 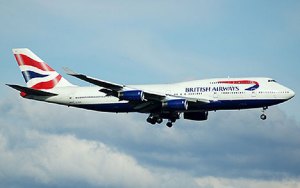 Sadly, there’s nothing to be done. I’m no scientist (no, honestly, I’m not) but I don’t think you can just sail up to Iceland and turn the volcano off. Nor I suspect could you send a fleet of helicopters up to blow the cloud away. Can you imagine the frustration to someone like me when there’s really no-one to blame ? My hatred of flying is only matched for my contempt for those that run airlines. Willie Walsh seems to have ably filled the the shoes of the crook who used to run BA, Lord King, and who but his own mother would give that shyster Michael O’Leary over at Ryanair anything but a swift kick to the goolies? Then there’s Branson. I’m running out of airlines I actually feel anything but hatred for. First they steal my money in complicated, if not fraudulent online booking forms (oh, you wish to wear underpants while flying? That’s another £17.50. Sick bags are £4.10 and a stale cheese sandwich is a tenner. Have a nice flight, sir) and THEN they scare the life out of me while I’m up there. I’m sure some of their pilots are former employees at EuroDisney.

But no, I can’t blame them. This is totally the fault of that cow Mother Nature. And probably George Osborne (and why not ? I need to vent). Sadly there’s not much I can do about either of them, I will just have to wait until the volcano blows itself out, or the wind changes direction and blows the dust cloud, and Osborn is forced, on his knees, to clean out the ash from still-moving jumbo jet engines, and what’s left of him given a paupers grave in Welling Cemetery (be sure to order the flowers early).

Osborne’s boss, Cameron, due on TV tonight appearing in the first ever live TV debate of the major party leaders. T o prepare for it, I have cleared the house of all heavy, sharp and throwable objects. I have upped my insurance on my tv and The Incumbent has emptied the liquor cabinet (well, the cupboard under the sink where I keep the booze.) I fear for my and her safety and for that of the contents of Railway Cuttings. Watching these three numpties parrot-out prepared answers to prepared and pre-supplied questions may just prompt an eruption of my own.

“Well don’t watch it, then” I hear you say. But I shall watch it because it is, as I say, the first time it’s ever happened on British TV, and also there’s something in me that believes it’s my duty to watch it. It’s clear that the party leaders only agreed to do it as part of their shameless scam to make us believe that politicians, in the wake of the expenses scandal, are now accessible, open and honest. And do you know, they actually think we believe all this cobblers? Well, why wouldn’t they ? We stood for an illegal war, our elected members stealing our money and their mates in the banking industry are still wandering around at liberty, because we’re told that Parliament will crack down on corruption in the city . We’d believe anything, wouldn’t we ? Even those of us who think we’ve rumbled them, will stroll up and put our ‘X’ next to their name come May 6th. We deserve all we get.

Some of us even believe there’s a big, black Icelandic cloud of dust stopping me going on holiday.
As long as I don’t have to get on a plane, I’ll believe anything.

2 thoughts on “Mike vrs the Volcano”