Is anyone in the slightest bit surprised that, with the couple of years that Gordon Brown (texture like sun) has spent at No.10, he loses his rag every so often? Just look at the numpties who surround him: Miliband (twice) Ainsworth, Harperson, Darling, the Cheeky Girls: Ben and Peter. (I suspect they like a bit of the rough stuff, naughty boys!)
No wonder he rants and raves. I bet he can hardly believe what’s happened to him. But a bully? Nah, surely not. And even if he is, does it really, truly matter any more? I suspect not. 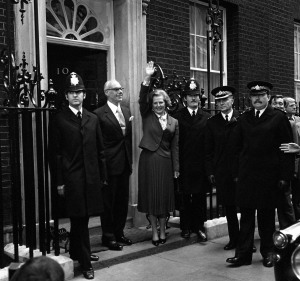 "Where there is fire, let us bring petrol"

Chances are, come May 7th we’ll be waking up to our first day of many many long years of a Tory Government. I remember back in the dark days of 1979 going into school on the morning after the general election to come face-to-face with my labour-voting English master, slumped over his desk.
“So the Tories got in then, Sir” I said to him.
“Yes, Bealing” he sighed. “And we’ll never get rid them. It’ll take years for people to trust Labour again”.

He was nearly right. We did eventually get rid of Maggie, then Major, but it did take forever and a day. I fear we are in a similar situation now. A large proportion of the voting public have forgotten what a Tory Government is like. If this current opposition were any where near attractive or believable to the electorate we would be witnessing a landslide in May, a rout of Gordon’s rabble. As it is, the public seem to be reeling at the thought of handing power to Dave, Osborne and all those other chinless berks in blue.

Extraordinarily, some commentators are actually predicting a hung parliament! That this administration, useless, hapless and hopeless as it is, is STILL in with a shout in the election, only goes to show what a loathesome, incompetent bunch this current crop of Tories are. What does Gordon have to do to lose this vote? Considering he’s been blamed for floods, plagues, pestilence,global financial colapse, a corrupt parliament, a dishonest police force (I said nothing, honest) and now bullying within Downing Street, I think 7 points behind the Tories in the polls is a remarkable acheivement.

Personally, I can’t see anything past a Tory victory, as much as it hurts to admit it. However, just in case you, like me, quite fancy another 5 years of Gordo Gaffs, or even the fun of a hung parliament, why not click on this link, print out one of these posters and stick it up in the office/in your front window? At the very least it’ll keep Tory canvassers away from your door.

And if you don’t I’ll send round Peter to give you a damn good thrashing.