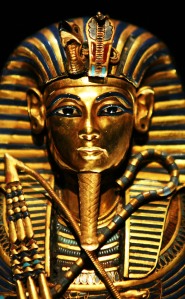 I wonder what happens when one finally snuffs it? Where do you go? Upwards to meet Robert Powell ? Downstairs to shake hands with the fella with the fork? Neither? Maybe you just lay there to eventually become a future layer of sedimentary rock, or to ‘ave worms eat thee up’ and end up in some yet-to be packaged growbag at Homebase? To be honest I don’t think about it too much, merely hoping that when my time comes I shall be wearing clean underwear and be monumentally in debt to Nat West Bank (one scenario far more likely than the other.)

I’ll wager young King Tut would have had a pretty strong opinion of his fate in the afterlife. Even at the tender age of 19, Tutankhamun would have been convinced in his own mind that he, all his worldly belongings buried with him, (including 130 walking sticks), and any other poor sod unfortunate enough to locked in the tomb when they No-More-Nailed the doors shut would be off to a better place. A place where the water was cool, the wine rich, the women all beautiful, bi-curious virgins, and the lbw laws were in favour of the bowler. (It’s a little known fact that Tut bowled useful medium left arm in-duckers.)

Sadly for the young man, a peaceful everafter lasted only up until 1922 when his tomb was found and his body exhumed for modern scientists, historians and the like to gawp at and poke about. For nearly ninety years, the world has shared a fascination with Tutankhamun and his life story. Egytologymania became a word I just made up. When the exhibition of the treasures found in his tomb came to London in the early 1970s, we commemorated the event at school by painting and drawing pictures of the famous death mask. I vividly remember my painting looking like Liberace- more fairy than Pharaoh. This awkward memory returned to me today when I saw the photo of the reconstruction of Tut’s face, based on scientific scans of the boy king’s mummy. I didn’t even know they showed the Catherine Tate Show in Egypt.

Tate and Tut. How very dare you !

So anyway, I read that rigorous tests on his skellington (correct) and DNA have revealed that Tut was the product of a relationship between his dad and his auntie. From this inter-family naughtiness he inherited several genetic disorders, he had a club foot (hence the walking sticks) often suffered crippling illness, and was probably killed by a virutlent strain of malaria, and his nickname around the Giza was ‘The Lucky King’. Ok, I made that last bit up too. But what an undignified way to go for a once, presumably, proud and powerful man? I suppose it could have been worse for the poor sod: they could have discovered he was Welsh.

Nevertheless, it’s doubtless not how he envisaged eternity as he lay amid the secluded dunes, during one of those rather long Cairo summers (made worse with all those German tourists in town). There he would lay, a teenage boy, dreaming of all that fun just waiting for him with those lovely virgins, before he would hurriedly have to wipe himself off with a sheet of papyrus and button himself up, as he heard Auntie’s flip-flops coming round the corner.

Sadly for our man Tut, like anyone who has had to catch a train to Manchester, he’d have to wait for his fun on a virgin. In his life-after-death he would have to be content having pieces nicked off him and holes bored into him in the name of science, and suffer his dynasty being mimicked by 21st century comediennes and London-based Egyptian nutters. And The Bangles, of course. 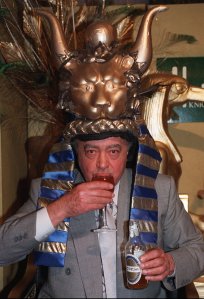 What will the scientist of the future discover about my life if my body is dug up 2,000 years from now? That I was descended from a long line of scaffolders’ knee-wrenchers? That my Guinness count contained traces of blood? That my eyes failed me at an early age due to a life of looking at photos and chronic self-abuse (hence the 130 boxes of kleenex buried with me)? Will they be able to tell that I could never get the hang of badminton, or that my highest score in any form of cricket was 48? A cursary glance at my teeth and vital organs should reveal my love of a wee dram and a bacon buttie (there will still be traces between my teeth, no doubt), and the simplest rectal probe will demonstrate just how many curries 45 year-old men used to eat every week in the early years of the 21st century.

Will the British Museum stage an exhibition of the treasures discovered buried with me? My pith helmets? My fascinating collection of lime pickle jars? All the ointments? The Status Quo OBE Albums? I doubt it. And to be honest I hope they don’t. Leave me be, up there with the virgins and the vino and, like King Tut, a Sphinx’s inscrutable smile.