I read with interest that they’re going to let cyclists travel the wrong way up a one-way street. Brilliant! I have enough problems crossing the road and avoid being mowed down by these bastards as it is, never mind getting rammed up the arse by one of them cos I was looking the wrong way. No, I’m not gonna start again, I have nothing more to add to what’s gone before (see previous rants) . Suffice to say I am considering buying a Renault and may be Piquet-ing myself across the road should I see any of the lycra fascists peddling towards me against the traffic. I’m not sure if Lewisham council employs a safety car, perhaps they can buy one out of the cash from all the parking tickets they dish out around Blackheath. Hurrumph. 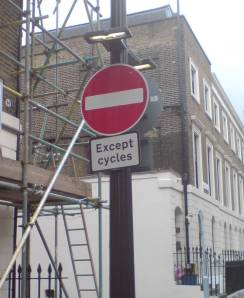 I don’t know why I am surprised at this news as I have the feeling I’ve been looking the wrong way at life in general for some time. It’s all gone a bit how’s yer father, hasn’t it?: The Tories, if and when they get in, are gonna make massive defence cuts, while the Labour Party are attacking the BBC and wanting to “cut it down to size”. How are we supposed to know who to vote for (or indeed if)? Gordon’s been trying to please all sides for two years now and managed to please no-one. Osbourne enrages his natural allied voters by dropping schemes for aircraft carriers and fighters, while Bob Ainsworth (yes, isn’t he?) wants more nukes.

Under this supposedly socialist (small ‘s’) government, nothing is built without private money sticking it’s snout in, the poorest are still getting a kicking by the tax man and Gordon Brown courts big business and tabloid newspapers for their support next election (small ‘chance’). I was once at a press awards ceremony when the then Chancellor Gordon appeared, live by satellite, to laud praise on Paul Dacre, the editor of The Daily Mail. That’s The Editor of The Daily Mail. I felt distinctly bilious, it nearly put me off my champagne and canapes. The writing was on the wall there-and-then. Blair had already wooed The Sun and here was his McHenchman cuddling up the The Mail. Stone me.

Time was when you knew who was who and where you stood. Tories cut taxes to save their rich mates, Labour upped the rate to pay for schools, health and a cheese sandwich and a warm bottle of light ale for any passing Trades Unionist. Unelected Peers were given seats in Tory Governments, while the honest working man rose up through the (elected) ranks to become a lowly, humble, under-paid Labour MP. What now?:Baroness Mandelson even ran the country for a brief period this summer with four fewer votes than Hamid Karzai raised in Afghanistan (none).
Back in the day public spending soared under a Labour administration and those of us on the right (or is it left) side-of-the-tracks were happy to pay more for the common good. Tories would hack away at the Welfare State and sod anyone who couldn’t afford private hospitals or education. They defended and invested in the military and weaponry and invaded anyone who so much as look at us in a funny way, while Labour cut the Services budget, were the party of Ban The Bomb…and invaded anyone who so much as looked at us in a funny way.

And bikes rode the correct way up the street.