Van Gogh didn’t cut off his own ear. According to German art historians, he made up the story to protect his friend Paul Gauguin who cut it off with a sword during a fight.

Years ago, me and my old flatmate Mickey Flynn had a punch-up while trying to stand upright on a mattress on his bedroom floor. I was punching him on the the nose and he was smashing me round the head with a squash racket— taking turns to deliver our blows: whack, ping, whack, ping. Lots of claret about but I don’t remember any sword being involved, any more than I remember what the fight was over. I know it would have been Guinness-fueled as our off-licence didn’t sell Absynth at the time. Bloody hurt though. 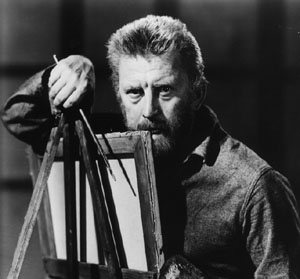 I suppose it’s the nature of friendships that sooner-or-later they involve full-blown rows. Most of us don’t reach for the Wilkinson, like Gauguin apparently did, but history is littered with mates who have fallen out: Julius Caeser and Mark Anthony; McBeth and Banquo; Mike and Bernie Winters— all friends and brothers who fell out, with varying degrees of violence.

I suppose here you’d expect me mention the jaw-dropping in-fighting within the Labour Party at the moment, with former friends and colleagues lining up to have a swing at Gordon Brown (texture like sun). Hazel Blears, Charles Clarke and David Blunkett—all chums and workmates who’ve reached for the squash racket and swung at the PM over the past few days.
Well I’m not going to mention that. Politicians, especially this lot, can never really be expected to remain loyal to anyone but themselves, and what goes around comes around—Gordon did his share of mud-slinging when his old mate Tony was dragging his feet leaving office. I have to say I did chuckle in amazement when Blunkett said Labour should avoid any more “self-inflicted” wounds. That’ll be D.Blunkett MP—the man who resigned twice over a couple of bouts of brazen naughtiness.

It doesn’t really matter, to be honest. Just a few weeks after GB‘s G20 triumph when he was set to save the world, his own little world seems to be collapsing around him in a whirlwind of bad judgement, bad luck and bad company. Half of me thinks he’ll be glad to get shot of the job and let the Party opposite pick up the pieces of the train wreck. It ain’t gonna get much better in the foreseeable future, whatever his (present) mate Darling thinks, so maybe the best thing might be to let the other mob have a go for a while, and hope they take the blame for some of it. On the other hand, dear old Gordon waited so long for his stint in the limelight he’s almost certainly reluctant to leave the stage. 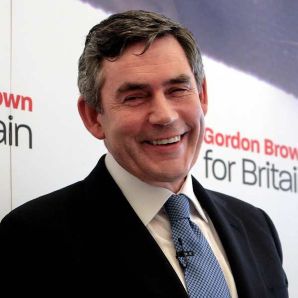 Never a frown with Gordon Brown

There’s another chilling factor to consider. Blair won a landslide (Thing’s can only get better) because there was a huge part of the electorate who’d forgotten or never knew what a Labour administration was like. in 1997 the memory of Callaghan’s shambles was a distant memory to most, an entry in a history book to others. We’re about to witness something similar next year: There are people who will vote next year who would have been very, very young when Thatcher, Normo Tebbs, Aitken, Archer, Tarzan, Lawson et al had their snouts in the trough and led the single-most arrogant and wicked Government this country has ever seen. You think THIS lot are bad? Those Tories were Masters of Evil. Money grabbing, crooks who viewed the ordinary voter with staggering contempt and disdain. So when the landslide happens at the polling booths next year, which bar a miracle it surely will, we’ll be faced with one, two maybe three terms of that lot before the voters forget enough about Gordon and his feckless buffoons to vote Labour in again. That could be 15 years of Cameron. 15 years of Theresa May and Liam Fox. 15 years of George Osborne. Time to hand out the cutlasses