I love a cup of tea, don’t you? Strong and dark (like my men), it’s often the best drink of the day. The Empire was founded on it, fortunes were made out of it, and millions of loyal subjects all over the world, climb mountains and pick the leaves til their fingers bleed so I can enjoy my cuppa. 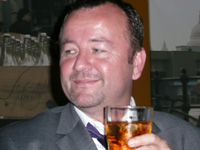 Working in an office full of Americans for so long, I was eyed by many with some suspicion. No half-caff, skinny latte for me. Assam, dash of milk. Shove your coffee. I also make noises when I take a long swig of it. “Ahhhhhhhhhh…” I go (as opposed to the “hunh” sound I’ve started to make when I get out of an armchair).

So just imagine my delight when I read of Tracy Davies of Jesmond, Newcastle. As her boyfriend, Mark Coghill explained in court:
“She let out a satisfaction sound, like if you have a cup of tea when you haven’t had one for a few days.
“A ‘mmmm’ sound.”
But was it a cup of tea that had led Ms Davies to let out such an exclamation of pleasure? Nope. She’d bitten off her boyfriend’s tongue while they were kissing. Apparently she had said to him “you never give me smoochy kisses any more”  (I wonder why). As the BBC reports: “They kissed and she bit down hard on his tongue, causing him to scream, and he tapped her on the head, hoping she would let go.”

TAPPED HER ON THE HEAD!!!!! Yeah, I think the incumbent Mrs B. might get a little tap on the head if she did that to me. Only the slightest of taps, of course (though by the look of Ms Davies, she’s a bit bigger than I am).

So what was it, you may well ask, that drove this loving woman (subs please check) to such a violent act, and for her lover to make such a feeble defence of his organ? Before the clinch, they’d polished of a bottle off vodka. Each.

No further questions, your witness.