This’ll be the third or fourth time I have posted this, but you can’t get too much of a good thing. This follows many requests from friends and drinking buddies alike to republish these rules (and they are RULES, not suggestions), and after observing from afar some truly shocking antics of the recent crop of Beliebers, Directioners and Whovians (I’m a Whothefvckcaresvian), who have reached their 18th birthday, somehow are allowed into my pubs, and who now seem intent on making my quiet drinking time a nightmare.

I suspect my first heart attack will arrive as I’m queuing (yes, I’m British) behind 7 Coiffured Dwarfs, fiddling through their man-purses while they individually ask for a WKD and pay for one with 20 pence pieces; or if the pub does Vodka Shots or bottles of Pomegranate and Strawberry Cider ?  “You do ? Excellent! one please. How much is that ? CAN OF YOU GUYS LEND ME 38 PENCE PLEASE ?”

Back in the day when the great Bill Greaves — Friend, Ale Expert, Pub Aficionado, Journalist and Right-Hand opening Bat — composed the following, life was a lot simpler (we’re talking about the 1980s, not the 1880s, you understand). People (men, mostly) stood together, talked together, drank (beer) together and bought a round for each other. If you were 18 years old (or even 15) “this is your pint of Bitter, get that down you and it’s your round next!”. Fluorescence purple or lime green alcoholic drinks had, thankfully, not been invented yet.

Too poor to get your round in ? We’ll stand you a few this time, but make sure you bring some cash next week or you can sod off out of our company (it was only 40p a pint after all).

So for those of us who hark back to such happy times, and for those of you who are in desperate need of a lesson in pub etiquette, I give you (once again):

1.When two or more enter the pub together, one – usually the first through the door – will begin proceedings with the words “Now then, what are we having?” He or she will then order and pay. This purchase is known as “the first round”.

2.This player, or “opener”, will remain “in the chair” while other friends or colleagues come through the door to join the round. He will remain in this benefactory role until either (a) his own glass sinks to beneath the half way mark or (b) another drinker finds himself almost bereft of his original refreshment and volunteers to “start a new round”.

3.In the absence of new arrivals, any player other than the opener may at any time inquire whether it is “the same again?” On receiving his instructions, he will then order and pay for “the second round”. (N.B. The second round is the last one to be specifically numbered. Beyond that point, nobody wishes to be reminded how many they have had and, anyway, no-one should be counting.) 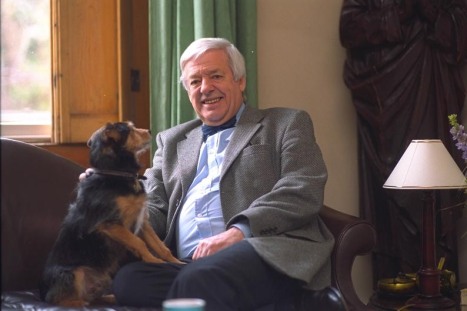 “His Eminence” Greaves (right, in jacket) with the late, great Preston

4.The round acknowledges no discrimination. All players, regardless of sex, age or social status, are expected to “stand their corner”. (Pedants might like to note that we are talking here of the only “round” in the English language that also contains a “corner”.

5.Any new entrant, joining the session after its inception, is not expected to “buy himself in” but should be invited to join the round by whoever is in the chair (see Rule 2). If, however, he is greeted by silence he may either (a) buy a drink just for himself or (b) attempt to buy a round for all present. If (a) or, worse still, (b) is not acceptable to the congregation then the new entrant has been snubbed and should in future seek out more appreciative company. There is one important exception…

6.For reasons of haste or poverty, a new arrival may insist on buying his own with the words “Thanks, but I’m only popping in for one”. If he is then seen to buy more than three drinks, he will be deemed a skinflint, neither broke nor in a hurry to get home, and will be penalised for his duplicity by being ordered to buy the next round.

7.Although everyone in the group is normally required to buy at least one round before leaving, the advent of either drunkenness or closing time sometimes renders this ideal unattainable. In such circumstances, any non-paying participant will (a) have “got away with it” and (b) appoint himself “opener” at the next forgathering. However, any player who notices on arrival that the round has “got out of hand” and has no chance of reaching his turn before “the last bell”, may start a “breakaway round” by buying a drink for himself and all subsequent arrivals. This stratagem breaks the round in two, keeps the cost within manageable proportions and is the only acceptable alternative to Rule 5.

8.When a pressing engagement elsewhere precludes further involvement, it is wholly unacceptable for any player who has not yet been in the chair to buy a round in which he cannot himself be included. In such circumstances Rule 7 (a) and (b) therefore apply.

9.In the event of any one glass becoming empty, a new round must be called immediately. This should not necessarily be called by the owner of the empty glass, however, because this place the slower drinker at an unfair fund-saving advantage. (N.B. Whereas it is permissible for any member of the round to decrease the capacity of his individual order – “just a half for me, please” – the opposite does not hold good. A large whisky, for instance, may be offered by the chair but never demanded of it.)

10.Regional variations. In various parts of the country, a particular establishment will impose its own individual codicil. In one Yorkshire pub, for example, the landlord’s Jack Russell terrier expects to be included in every round. Where such amendments exist, and are properly advertised, they must be piously observed. We are, after all, talking about a religion.

2 thoughts on “Greaves’ Rules: It’s Your Round Again, Mate”