I have some bad news to depart. I also have some good news for you.

The bad bit is that I will no longer regale you with “Tales from the Shovel : A Simpleton’s Life in a Rural Pub” . No, no. My love affair with the aforementioned (and often mentioned) local boozer has ended, and that situation will not alter up to and until I receive an apology from an offending regular. He knows who he is. 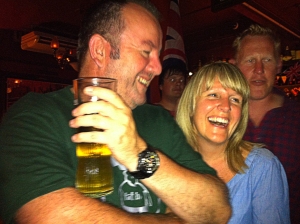 You’re probably thinking something along the lines of “Oh God, Bealing has hd a row about the Police service, or George Osborne‘s political genius, Robin Jackman‘s mincing run-up, or the state of the BBC. Why else would he leave The Shovel ?”

No. None of that. I cannot go into exactly what happened, but suffice to say, I shall not darken that door for a very long time. I may even start using The Liniment and Poultice, as a regular haunt, even though The Incumbent says no, we won’t.

So it being a Friday night, and one of the few in the month which coincides with me having a couple of bob in my pocket, we went up to our old haunts to see what we could see.

We saw a couple of old mates, that’s what we could see. And we drank. And we had fun. And we spent money in Old Greenwich Town, in an Old Greenwich Pub: just like, not only had we never left but ,that both of us were working. And working for firms who paid the proper rate. I can’t remember back that far. Back when I was still allowed to drink in The Shovel (I’ll tell you later) the biggest round I ever bought was £9.50 – and that was only if the Fleet was in. Here I paid (with gay abandon, I might add) £19.50 for the odd cider and a pint-or-two of lager.

But it mattered not one jot. My very old (and in some cases, very drunk) friends had brought me to a pub where Chas Hodges and his band were playing. You know who Chas is. Chas is the Chas of Chas and Dave. I may have mentioned my love for them before. I’m sure I have.

So I am standing in a pub in South London next to the Pearly King and Queen of the Royal Borough of Greenwich (I kid you not), I have a pint of cider in my hand, and one half – the half that writes and owns the songs – of Chas and Dave is but a few feet in front of me. What do I do ?

I wanted to call you all up to ask if you wanted to join me and The Incumbent in this marvellous evening. But I was too excited/drunk to do so.

The best I could do is to record the evening in the best I could. There is video, and one day I’m sure it will be available. Not that there will be a huge call for it.

But there is this: 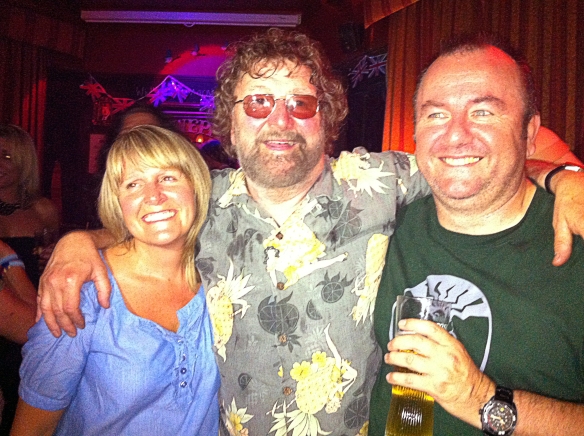 I may or may not have known all the words to all the songs but me and my new best mate Chas are getting on just fine. Not sure who the Doris on the left is though.