Ah yes: Exam Results. I remember them. For some reason whenever I see on the news that today’s the day when the exam results come through, I get a chill running through my bones. I feel nauseous. The very water inside me somehow wants to get out.

Perhaps this is because it brings back memories of when I received an envelope containing my results all those years ago ? Perhaps not. It wasn’t all bad (honest) I scraped in here, and got by there. Could have been a lot worse (the teachers at school certainly predicted so). No it’s not those memories which irk me. It’s something rather more recent. Something that’s still taking place. It’s the “jumping for joy photos”.

Stick your head out of the window, listen hard and there’s a good chance you’ll be able to hear the unmistakable sound of a photographer near you organising a staggeringly unimaginative photo.

“Ok if you could spread yourself out in a line towards me… no, no, can we have the two blonde young ladies in the middle… yes, much better… now, on the count of three, could you all jump up, punch  the air and cheer ? … especially you girls… thanks very much….right here we go…one…two…three….SNAP…CLICK…SNAP…”

It happens every year (twice in the UK), and it’s happening today with the announcement of today’s A-Level results.

And it’s not necessarily the fault of the photographer. Would you believe that, in this day in age, there are national newspaper and agency picture editors who actually commission such dross ? They do, I promise you. And why ? Because above them are Chief Subs, Features Editors and other assorted numpties who deal in crap and clichés. But don’t take my word for it. Buy a paper tomorrow (any one should do) and look for yourselves. If you can’t wait, switch on TV Regional News this evening (“Local Man bit by Local Dog, Locally“). They’ll be down at their local High School or Academy filming young men and women, crying with/jumping for joy (delete where applicable).

Here’s another. It’s gonna be hot this weekend. Some at the Met Office are predicting up to 30 degrees over the south of England. Queue the hot weather picture:

You can bet your left testicle (or whatever you have to hand) that you’ll find a version of the above tomorrow in your favourite rag. If I had a penny for every time someone submitted a photo of boys diving into the sea/pond/canal/fountain once the temperatures reach 28 degrees, I’d have £17.43.

But the photographers don’t get off Scot free. After all, they take the snap, they ping it in to the picture desk and some berk uses it. Ca-Ching! Why on earth do you think that we’ve seen this pose endlessly over the last few weeks ?

No. Serena’s not biting that medal because she’s hungry (again), but because there’s an unwritten law amongst sports snappers which tells them that’s what Gold Medallists do.  And you know what ? – the pictures go in the paper. They get in the linen, as we used to say. (oh, and by the way, don’t think that this dreadful state of affairs will finish with the death of newspapers. Online Photo Eds and Snappers – oh, ok Monkeys – are just as (un)imaginative as are the paper ones.)

But don’t let it worry you. If you have been lucky in life and never had to listen and watch a back bench fuck-up your picture selection, you will remain unscathed by all this. I’m sure you probably think my head is about to pop off again, driven by dark memories of no-nothing subs and myopic designers ? You may or may not be correct.

I shan’t go on. Just to say, the next time you see Obama do this… 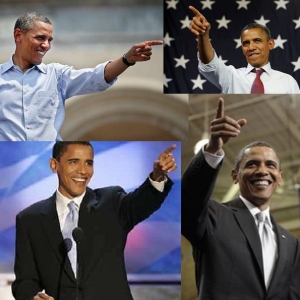 …don’t think that he’s seen someone in the crowd he recognise, it’s just that someone (probably a press officer) once told him that photos of Pointing Politicians get in the linen too. He’s not alone. They all do it. Just watch them all getting off a plane pointing; Take the applause of the crowd, pointing; Arrive in Brussels POINTING. Watch out for Barack when he wins the election. He’ll be jumping for joy.

**”You Can’t Polish a Turd, Mike”…Telegraph Photographer Roy Letkey on being asked by me how his photos were from a terribly thought-out photo shoot.