A mere 17 months after the Rugby World Cup commenced and we have already arrived at the Quarter Final Stage. Well we will do soon anyway. I’ve had marriages which didn’t last as long as this tournament.  The competition, like World War I and my nuptials, will all be over by Christmas. 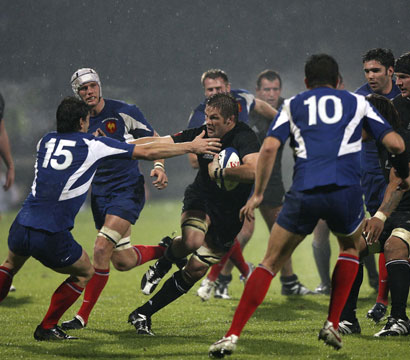 So the minnows of Namibia, America and Scotland have returned home, leaving the heavyweights of world rugby to slug it out over the next 76 weeks (plus extra time) to see who are the kings of the joint 14th most popular sport in the world. The usual suspects are still in the mix, the usual favourites are ready and waiting, just a flankers jockstrap away from choking again and going home themselves. Whatever happens the final will be contested by one team from the northern hemisphere and one from the south. That’s just how the draw worked out. Honest.

Next Saturday, sometime around when the sparrows are emitting gas over your lawn, England will play France in a match-up that has all the appeal of a maggot-infested sore on your nan’s back. France, the headless cockerels of world rugby, have exceeded themselves in their ineptitude this year. Just when you think they have hit rock-bottom, Les Bleus produce a performance of such sparkling awfulness that only one team left in the competition could hope to match it. Step forward the English.

England are playing as if they’ve all been out on the piss the night before, kissing dwarfs and abusing young women as they go about their nocturnal beano. But, of course, no professional outfit would behave like that, especially when the team are playing like Avon Rugby Club 5th team, not the only team from the north to win the bloody trophy. This match promises very little indeed. Never will the phrase “like two bald drunk men fighting over a comb” be more aptly applied.

To complete the Keystone Cops feel of this particular England squad, we have the all-singing and all-dancing Matt Stevens, star of the X-Factor, but fuck all else, and Matt Banahan – a huge Sunday-morning-lummox-of-a-man who apparently plays on the wing. Retired props from all over the kingdom are lining up to pit their arthritic knees and prolapsed backs against Stevens, a prop picked for his speed and work ethic around the park. Pity the selectors didn’t choose a prop who could actually…er…prop. As for Banahan, this tattooed titan who stands solid like a particularly immobile wind-break, I have no idea why he was picked. Perhaps he hold Stevens’ mic during gigs. Maybe Matt S. and Matt B. could swap positions ? It couldn’t get any worse.

If both teams could lose and both go home it would do the tournament and the fans a big, big favour. Although, of course if England were to make the final it would mean legendary Wayne Barnes (being English too) would not be permitted to referee the game. Most rugby fans would be happy with that. Barnes, the North’s answer to the shocking Steve Walsh (or Bryce Lawrence, depending where in the world you’re reading this) is the only bloke in the competition who thinks Matt Stevens is playing well. He has missed forward passes, punches and offsides galore. I wouldn’t be surprised if he’s missed a few scrums too – he looks in the wrong direction so often. If only he’d miss a half-dozen games of so over the next month-or-so.

So if England go home, Barnes stays. Which would you prefer ? 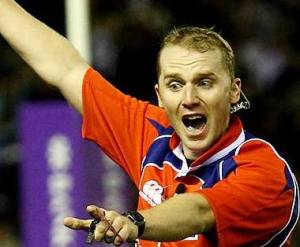 A couple of hours before the Franglais débâcle (see what I did there?) the Irish meet Wales in the battle of the only two European sides who have demonstrated an understanding of both the rules and purpose of the sport of Rugby Union. The lads in green run around frenetically, in the way that all Irish sides play rugby, football, chess and guerilla actions against an occupying force. There always seem to be more of them than you and, after they’ve practised a bit of fenian footwork all the way up the back of your head, there usually are.

The Welsh haven’t had a team like this one since we went decimal. Not since JJ, JPR or Mervyn has the Principality produced a XV which didn’t make you wanna curl up and giggle your sphincter off. For years my mate in Paris (forget his name) has been losing his shirt on every game these European Shoulder Chip-Wearing Champions have played. Now this year we may finally see a side from the west Offa’s Dyke get close to winning the Cup, and my mate (…nope, still can’t remember it) will be able to, not only recoup his Francs but also to wear that red Welsh replica shirt in the cafes and bars of some arrondissement or other without looking a complete berk. He’ll be safe in the knowledge that for the first time in living memory Frenchmen will walk past him without pointing and giggling. Well, not about him being Welsh anyway.

But my money’s on the Irish to see them off. It has to be. I am not well enough for Wales to win anything, and one funny turn-per-year is enough for me.  I’m nearly out of blood-pressure pills as it is, and fearing the Taffs will prevail may well send me reaching for the super-strength Ramipril.

In the other (Southern) half of the draw, I can’t see past the Boks to make the final. The Kiwis, as we know, are prone to choking on their own smugness-cake if they get within a maori vuvuzela of a final appearance. Their talisman, the perennial show-pony Dan Carter has exited, stage left, and the AB’s are already drawing up a list of excuses to call upon when they succumb to the inevitable. (the English have knicked our shirts being the more laughable) and, just in case that doesn’t work this year, they have started thinking about the 2015 competition.  They should be good enough to trounce the Argies (if they don’t it’ll really kickoff down there in 1957land) but I suspect the SAffers will be too strong for them, having dealt with the non-tackling, non-scrummaging, smarm-fest that is the Wallaby XV. The loss of the siege-gun kicker Frans Steyn to injury will not stop the Bokke Juggernaut rolling on (funny how there are not endless stories and whines on how boring the Steyn sisters’ kicks are? They are clearly much more exciting than Johnny Wilkinson’s boring kicking tactics.)

So I look forward to an Ireland vrs S.Africa final, with NZ running circles around a hapless and helpless English team in the 3rd place play-off.  I won’t predict the score of the Final ’til I see who’s refereeing. It’ll apparently be either Bryce Lawrence or a traffic cone, depending on who is judged to know more of the rules. The Jury’s still out.

6 thoughts on “Coming for to Carry Me Home. Please.”