I’ve now gone a fortnight without cable tv and it’s driving me up the wall. The fine chaps at Virgin promise me faithfully that I’ll have all 738 channels installed at the beginning of next month but til then I have to put up with whatever passes for watchable tv via Freeview.

Having watched every episode of Top Gear, Nazi Hunters and Antiques Roadshow three times I’m running out of options. Just goes to show how quickly one becomes spoilt by access to 8 sports channels and the 74 documentary networks, plus the odd squint at endless re-runs of Only Fools and Horses (RIP Trigger, and all that, but is it ever not on?). 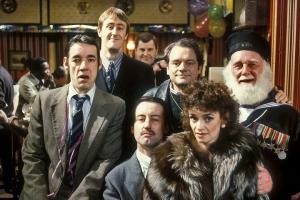 Many moons ago, when my trousers still fit me and I had no idea what I was gonna do with my life (easy tiger), it seemed there was always something on. Three channels were just fine and dandy, thankyouverymuch. We had no video recorders, MTV or even QVC to keep us going. We were happy with whatever the BBC or, in times of desperation, ITV chose to pump down the tube. For some of us when Channel 4 came along it was just pure extravagance. Who would have time to watch FOUR stations?

Us kids would lap up everything they threw at us, and because there were only 3 stations to choose from, chances were that everyone at school had watched the same thing as you. There was none of this “did you see Fluffy the Vampire Dolphin on CockFX USA last night” because there was no CockFX USA on last night. Or any night come to that.

Us kids had our hour or two in the early evening when we’d happily put up with whatevr dross the Beeb or the Children’s Film Foundation would throw at us.  These were full of kids who didnt seem to be like us. The producers obviously thought they were like us, but somehow they were different. They probably came from West London where they were posh and had carpets, doors and suchlike. Down in SE London we had no such luxuries, but we enjoyed the shows anyway.

Stuff Like The Double Deckers (which Fox/Youtube have kindly put the kibosh on me showing here) was populated by West London posh kids, dressed up to look like urchins and vagabonds, but looked like future Cabinet ministers and Prep School Headmistresses (and that was only Melvin Hayes.) 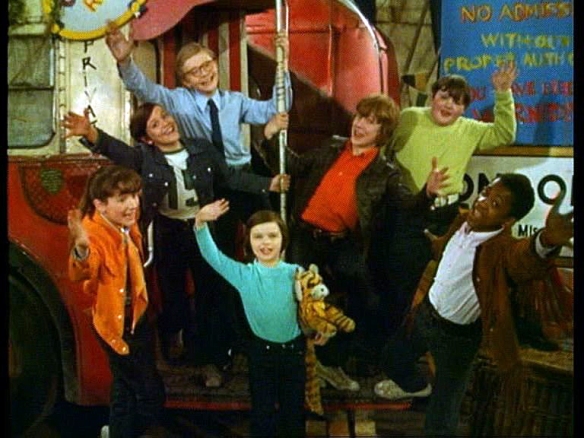 I mean look at them ! Never been further East than Notting Hill.  Still, it was all we had and it was ours to watch while mum made the tea (sorry, dinner).  At 6 o’clock the news would come on, which was boring but dad watched it anyway, then if there was nothing worth watching after that he turned the telly off !! What a weirdo.

No Such problems for us lot on a Saturday morning however. The telly was ours and ours alone. Saturdays meant The Multi Coloured Swap Shop – a rambling two-and-a-half hours of cartoons, comedy, music and swapping. There were several incarnations of this show, many hosted by charming, hairy, non-murderer Noel Edmonds, all based around the premis that kids would call in and offer their Raleigh Chipper of someone’s Hot Wheels, or their sister’s Tiny Tears for a pair of Gary Sprake Goalie’s Gloves. I never actually knew anyone who offered or bid for anything on the show. We were far more interested in the cartoons and series from around the world which Swap Shop introduced us to.

There were The Banana Splits, the 1960s black and white French serial version of Robinson Crusoe (it was worth watching for the theme tune alone) and many more. But you couldn’t beat The Flashing Blade. No-one had a clue what was going on, apart from somewhere in Maida Vale there were some appalling, overpaid voice-over actors dubbing this swashbuckler to within an inch of its life. But if you weren’t having a sword fight with your brother by the end of this then you were clinically dead from the neck up. The theme tune went on for longer than the show did. I guarantee no-one watching T’BBC’s new Musketeers will get more pleasure out of the joy I experienced watching the Flashing Blade.

So that was how we spent our time. Oh the innocence of it all. It was all good healthy stuff. The closest we came to being turned on was a flash of Sally Jame’s drawers if she slipped over on a Phantom Flan on TISWAS. Nowadays, if you wanted to watch half our of a young, sweater-clad Austrian babe playing with stallions there are plenty of websites you can go to. Back when I were a lad, this is all we got. And we just didn’t get it. And I gather nor did she.

Leave a Reply to Shocked of Dorset Cancel reply