To Westminster to protest against the hike in education fees. It’s a long time since I took to the streets in protest of anything, if you don’t count that time one Christmas when they wouldn’t let us in the pub. Students arrived from all over the country. Some of them clearly hadn’t experienced the morning air for some time. They looked pale, they looked greasy, they looked spotty, they looked disoriented without a Playstation controller in their hands. A couple behind us had had to get up at 8 o’clock IN THE MORNING !!! Some from up north had presumably been woken even earlier to travel to London. But credit where credit’s due – they turned up. 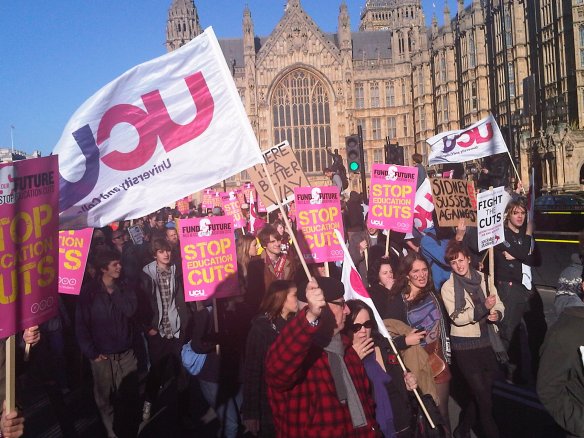 We, of course, weren’t college students or even ex-college students, but joined in anyway and walked along with the throng and were accepted, presumably as lecturers, or in my case probably a janitor. The brass band struck up with a jolly selection of bugle melodies, the sort of thing we all enjoyed in Brassed Off. Ah ! Happy memories of the 70’s and the 80’s flooded back.

“They say cut back ,We say fight back” barked a lad on the bullhorn, and the surrounding spotty herberts joined in man and womanfully. “Tory Scum, Here We Come” sang another bunch. “9K? No Way” bellowed another group – alluding to the money they fear they’ll have to stump up for their education. I felt proud of them. Proud that they’d come on to the streets to display their anger, proud that I was with them. I felt old too. I couldn’t join in with most of the songs owing to the fact my balls dropped some years ago and I couldn’t reach the high-pitched squeak that most around me were reaching during their rendition of “Fuck the Fees”. It was like marching with the BeeGees.

Another tell-tale sign of old age was gradually rearing its ugly head. We’d stopped for a McDonald’s breakfast (right on, brother!) before we joined the demo and long before the march had reached The Palace of Westminster I was beginning to feel uncomfortable. Standing around London street corners on a chilly November morning, having had half a pint of coffee, then slowly trudging along with no clear signs of a public toilet was beginning to be painful. I looked across to The Incumbent who I could tell was feeling the strain as much as I was. Perhaps we’d OD’d on the hash browns too cos I was feeling the pressure at both ends. I thought I’d try to start my own chant:

“I Need a Poo ! Please show me Where’s the loo”

No one  joined in.

Passing the House of Commons the noise from the crowd inevitably grew louder. Many stopped off by the side to take photos, wave their banners and generally take in the scene. Just behind us, a hundred or so decided to mount a sitdown protest to show the watching MPs they were sitting down for what they stood for. For the smallest faction of a second I considered joining them. By now my back was killing me and if I sat down there was a good chance I’d never get up. So onward and downward we ploughed, through the now numerous gaps in the protesters which were appearing ahead of us. Onto Millbank where rent-a-berk had started throwing banners at policemen and kicking in the windows of the offices.

As we made our way to the head of the protest, hundreds of students and a few dozen coppers ran back past us, presumably to help out with the minor punch-up happening back down the way. I again decided a pee and a pint was much more a pressing matter than knocking off a policeman’s helmet or spending a night in the cells. Martin Sheen I ain’t.

So anyway, we freed ourselves from the huddled masses, turned down a backstreet and there was the wondrous sight of a pub. A pint, a pasty and a piddle later (though not necessarily in that order) and we were settled down on the chuff-chuff, homeward bound. A short walk after to Railway cuttings and we’ve now settled in front of the BBC to try to see ourselves on the news. No such luck, I’m afraid as the coverage is now exclusively concerned with the trouble at Millbank. From some angles it looks pretty nasty. But I suspect it’ll all blow over soon enough- most of those kids won’t have been out this late before.