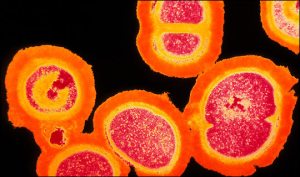 A new superbug that is resistant to even the most powerful antibiotics has entered UK hospitals, experts warn.
They say bacteria that make an enzyme called NDM-1 have travelled back with NHS patients who went abroad to countries like India and Pakistan for treatments such as cosmetic surgery.
Although there have only been about 50 cases identified in the UK so far, scientists fear it will go global.

Scary innit ? Well maybe. It’s August, there’s nothing to write about, so let’s scare the bejeesus out of the population and announce a new killer virus (see “Gnu Flu” in It Is Written – earlier post).

I got an infection when on holiday last week, apparently. Fortunately for me it wasn’t fatal, unless the BBC or the Daily Express tell me different. My aforementioned wobbly crown started to get even wobblier, and worse, started to ache. Infected. Now as we all know, there’s nothing worse than a toothache (if you discount nuclear war or a coalition government) and this one really did put me off my stride no matter how much Medico San Miguel I administered to the troublesome spot and surrounding areas.

For three days the pain came and went, pulsed and throbbed in the back of my mouth, often forcing me to prescribe more numbing fluid than was decent. I didn’t want to fly with toothache (I didn’t really wanna fly at all), so imagine my relief when the day before we were due to return home the pain subsided a little. Happy days. To celebrate I chose to cook a slap up meal (pizzas) for the kids, went to the fridge for the ingredients, picked up some cheese, went to tear the packet open with my teeth and promptly sheared off half of a front tooth. Bugger.

So that’s how I landed back in Blighty on Friday: swollen molar and deficient in the front tooth department to the tune of half. I was carrying a healthy tan, some undesigner stubble and a dashing, windswept look to the barnet, but had a mouth like Nanny McPhee. If I could have bitten the bullet I would have done, instead I was left to grab the bull by the balls and call my very least favourite phone number: The Dentist.

I’ve always hated the dentist. It used to be the pain I feared, now it’s the bills. My present situation isn’t conducive to me wanting to chuck wads of cash at a dental surgeon, but needs must so off I popped to my appointment yesterday lunchtime.

“Hello there” said the doc “haven’t seen you for a while. How have you been ?”
“Well I’m in a bit of a state, to be honest” I whined.
He looked at his notes (or rather mine).
“Three years. We haven’t seen you for three years !” he sounded surprised. I don’t know why. If he’d missed me that much he could have always phoned.
“Probably why I’m in the state I’m in” I said, embarrassed, as I climbed into the chair.
“But three years ! that really is far too long”. I could see he didn’t want to let this one go.
“Yes, sorry” I was kinda hoping he’d have looked into my mouth by now. “I’ll make sure I don’t leave it so long next time. Can I tell you what’s wrong?” I proceeded to tell him the tale of the teeth, and eventually he deigned to take a peek.

A clatter of steel on enamel and the odd poke with a spike into my gums later he re-emerged into the daylight.
“Is the front one hurting you at the moment ?”
“No” (I’d already told him that)
“And how about the crown?”
“Yes” (ditto)
“Well let’s have a look at that one first then”. So saying, he re-entered the pain scene and began poking, scraping and levering.
“Does that hurt ?” he redundantly asked.
“Ot earry” I raised my eyebrows. he had both hands in my gob, what else could I do?

Emboldened by my lack of pain he set about me again. Lever, lever, scrape, tug, lever, lever. He stepped back. “You want me to numb you up ? We’re almost there”
I wiped a slight tear from the corner of my eye. I decided to be brave. “No, no, I’ll be fine”

After what seemed like an age of us tangoing around the swivel chair, him orally fisting me and me with a tight grip on his forearms, he pulled the crown from my mouth. “Hmmm…… how long ago did you have this fitted?”
“Oh about three years ago I would think” I replied, wiping the saliva from my chin.
“Where?”
“Here”
“Oh”
“Something wrong?” I wondered.
“No..no.. just it seems to have moved”
“Oh”. I didn’t know what else to say.
“Well. you have a slight infection in there and the posts seem to have separated”
“Oh”
“I’ll try to clean it up and get the posts back in, otherwise we’ll have to loose the tooth”
“Oh” (my ‘ohs’ were becoming higher and higher)

After a few more scrapes, and squirt or two of air and a smidge of suction, he returned to my mouth to reverse the process. He was now pushing in as opposed to pulling out, which in turn caused our dance routine to rotate the chair in the opposite direction. His assistant showed some pretty nifty footwork when dodging the doctor’s ankles as I swung him around the room. This clearly wasn’t going well. 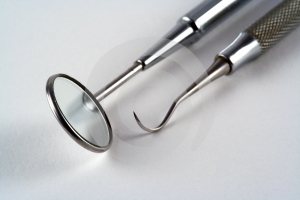 After a few more verses he removed his mits, admitting defeat.
“No. No I can’t get it in” He sighed. The posts have splayed.
“Oh” (well what would you have said?).
After some further thought on the matter, he filed off one of the posts, covered the crown with cement, held me in a half nelson and AT LAST inserted the crown back into it’s rightful place.
“Now bite down” his beads of sweat was threatening to drip on my forehead. “How does that feel ?”
“A little proud” I panted through clenched teeth.
“Really? Bite again”
“Still feels proud.
“Really?”
“None of my other teeth touch. It’s not right. You sure it’s the right way round?”
“Yes, yes. Now look, ” (moving swiftly on) “bear with it and if the pain persists pop back and I’ll write you out a script for some antibiotics to get rid of the infection.”
“But I can’t bite”
“That’ll settle down” he said, almost as if he meant it. “if not I can have another bash at it next time”
Have another bash at it ?????? Which page of the Dentist’s Handbook was that phrase from ?
Whatever was going on in the back of my mouth, I still had a gaping hole in the front.
“What about my front tooth? Will it need a crown?” I inquired.
“We can discuss that next time” he smiled, de-rubbergloving himself. He’d clearly had enough.

My time was up. Between now and the next time I’d be wandering around south London with a wonky jaw and a gap in my smile, in the unlikely event I choose to employ it in the near future.

8 thoughts on “Fed Up to the Front Teeth”