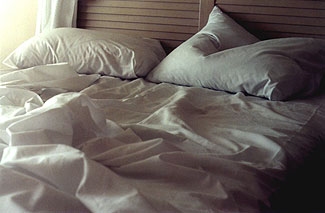 It’s all gone a bit how’s-yer-father. Things are not how they should be, here at Railway Cuttings. Between us, the incumbent and I are managing an average of three hours sleep per night. The reasons are many and varied. For starters I have a crap mattress. I forget where I bought it, but by the feel of the springs poking though the sheet, into my left shoulder blade it would appear it came from the set of Midnight Express. My significant other has lost the use of her right arm and shoulder, and the mattress is in the frame as the chief culprit. There are other factors to consider:

Even on a pleasant, temperate night temperatures in my bedroom reach around 240 degrees (gas reg 9), but over the past several days London has been gripped by a heatwave. My bedroom has turned into an Aga. Lay down on my bed and after a couple of minutes you get to appreciate how a Pop Tart must feel during its last few in-tact moments. I tell you, it’s fucking hot. The sweat reaches Cool Hand Luke proportions. Windows need to be opened, fans need to be engaged. Sod it! I remember that I’d donated my room fan to Kate’s youngest son a few weeks ago— he was hot. Bugger. Pas de problem, windows at each end of the house are opened—get a nice breeze through. Ahhhh that’s better.

But there’s another snag: Although it’s not quite Elwood Blues‘ apartment, my house is located quite close to the local railway station—as my pet name for it implies. You don’t notice the trains during the day, nothing more than a gentle hum in the background when you’re grilling your bangers on the barbie. But lay down in bed on a hot, humid night, windows open, and it feels like you’re getting your head down at the far end of platform cinq, Gare Du Nord. They come in and out of the station about every 12½ minutes—synchronized brilliantly with the time I manage to position my body between the razor-wire springs and the boulders in my mattress, get as settled as I can, turn over the sweat-soaked pillow, and drift gently into the land of nod. The sound of the 12.21 from London Bridge sounds like that tank in the last scene of Saving Private Ryan. Terrifying.

Come here, there’s more. Once the last train (The Vomit Comet) carrying the piss-heads of South London home to their caravans has gone through, we then get treated to the heavy artillery: I don’t know what these night trains are they’re carrying, may be milk, maybe coal, maybe nuclear warheads or toxic waste for landfill, but these, slow-moving, creaking, rumbling fuckers make the window frames rattle, the half-full dishwasher dance around the kitchen floor downstairs, glasses rattling therein, and the toilet seat crash down to the closed position (yes, I know).

No matter, at least we’re not being slowly sauteed in our own perspiration. The breeze feels good, though I suspect that it’s the gentle zephyr through the window that’s also contributing to our cricked backs. It’s a price worth paying. When cricket umpires start collapsing at the wicket, as one did yesterday, you know that this global warming which we’ve all been hoping for has finally arrived. Around 4am I try another tack: BBC News24. If anything can induce sleep, surely that can? Well, in part. I drift in-and-out through the night and seem always to wake up at the same time past the hour, therefore catching the same news item, time and time again. Last night I saw brief highlights of the Ladies Singles Final at Wimbledon FOUR TIMES. I didn’t want to see it once. That can be a tad frustrating. I start getting angry with myself that I’m not asleep— which means I can’t sleep.

So I get up, go downstairs to make a cup of tea and to help the garden greet the morning sun. Kate’s been up for hours, her back pain being too much to bear (she’s watched the same report on Michael Jackson’s memorial five times since midnight). We grunt sympathetically at each other and shuffle around the house. We wait for a decent hour to start functioning properly, when we can convince ourselves that it’s not Saturday night any more, it’s actually Sunday morning. Proper conversation starts at about 7.30. and we plan our day. Nothing is open til 10 o’clock when I’ll go get the papers and some eggs from breakfast. Then perhaps a stroll before lunch, and a mass newspaper-reading session in the garden this afternoon. It’s only to delay the inevitable: going back to bed to try to catch up on sleep. If I go to bed before 10pm I’ll be wide awake by 4am, at best (British Rail allowing), so I’ll have to hold out.

Perhaps a couple of sundowners or nightcaps later will help? I start a new job tomorrow and I’m as nervous as a Brazilian backpacker on a London Tube. Yes, perhaps a modicum of claret will chase away the nerves tonight, block out the pain of the springs, and the noise of the chuff-chuffs? But moderation is the key. Hungover, exhausted and walking hunched over like Marley’s ghost is no way to arrive on your first day of a new job.

Dunno, maybe I’ll sleep on it.