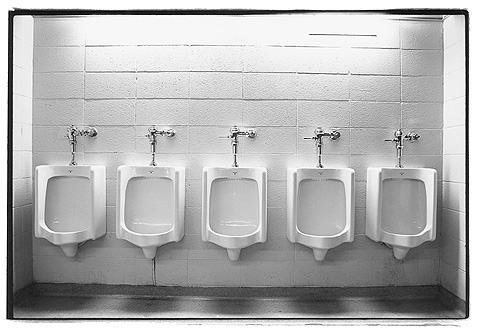 One night last week a bloke talked to me in the pub toilet. Yes, exactly, that’s what I thought. He actually tried to hold a conversation with me while I was going about my business. Yes. He did.

Most of you reading this will fully understand the distress this caused me, but in case a woman has accidentally logged in, I shall explain: Blokes don’t talk to each other in the loo. Never. Never, ever, ever. It’s just not done. I could be standing there at the urinals with my best mate to my left, my dad to my right and my long-lost brother washing his hands at the sink behind me and no words would be exchanged until we left the Gents. Protocol is to have one hand (or in my case two hands) on your willy and stare straight ahead reading the graffiti or the very amusing adverts for online poker on the wall in front of you. But whatever happens KEEP YOUR MOUTH SHUT, YOUR OPINIONS TO YOURSELF AND YOUR EYES FRONT !!!

A public lavatory is a place where we men feel at our most vulnerable. We’re not the greatest communicators at the best of times, so the chances of indulging in idle persiflage fly out of the window the minute we get our winkles out. Surely, ladies, you recognise that in your man? I put it to you (if you’ll excuse the image) that if he gets his thingy out in your presence he’s unlikely to want to talk to you about last night’s footy results, or the queue at Tescos. I hear tell that, while in the Ladies, the fairer sex do indeed partake in friendly chat and banter (of what nature, I know not) and they seem to get along just fine in there. Maybe it’s a little sanctuary, free from those arseholes outside, where girl can speak to girl without being interrupted or patronised by boy? Bless her pretty little head. No such conversation does, or rather should take place in a blokes’ khazi.

So this bloke—let’s, for the sake of looking for another joke, call him Dan— so this bloke Dan spoke to me in the Gents. I have no idea what he said, I was in shock. All I know is that it wasn’t “Alright, mate?” or “Ooooooooh, that’s better”. No, it was in the form of an opening line of a conversation. I just heard noise, my brain couldn’t process the information. Virtually all of my body froze, though part of it went limp and shriveled. I zipped up, nodded politely (I’m British, after all) and left immediately and quickly, and what I had started in the urinal was left to dribble down the inside of my trouser leg as I fled.

So what was I afraid of? That the man was a homosexual? That he was about to “lend me a hand”? That he was the Barrymore of Blackheath and I’d end up emotionally and internally scarred for life? Don’t talk so much Tommy Rot! I have no leanings in that direction. I’ve always been a big hairy hetro (whatever I look like to you) and have no wish to catch the other bus. I don’t even know if this bloke IS gay. My Gaydar doesn’t work. He may just be very friendly, though a tad inappropriate. Having said that, I’ve never either been worried by or about gay men or women. I have several openly gay friends (yes, I know they all say that, but I actually do) and have never felt threatened by them or had the inkling that they were gonna goose me at any minute (their loss, actually). I like to think I view them with the same contempt as I do all my friends. It’s still your round at the bar, mate, even if you ARE a bit light on your loafers. You’re all the same in my eyes, as long as you do your bit in the office, laugh at my jokes and understand the lbw laws. It’s not as if you’re Welsh or anything.

But maybe this is all a front? Maybe, deep down, I’m scared? A long time ago I spent the night round a mate’s flat after we’d gotten a bit squiffy that evening. I was woken up in the spare room the following morning by my pal delivering a cup of tea. Having placed the cup by the bed, he left the room saying, “There you go mate” says he “I’ll just go get myself sorted, then I’ll give you a shower”
“WHAT!!!!!!”— I’d sat bolt upright in the bed, my head thumping, back in spasm, legs shaking like leaves, willy recoiling into my body. Fortunately I’d misheard him. What he’d actually said was “I’ll give you a shout”. Phew! He’s a big bloke and could have quite easily showered me against my will.

It annoys me, my reaction to these situations. I’ve always considered myself a good Socialist, with a capital ‘S’ and a liberal with a small ‘l’, inside this beer-swilling, rugby-loving, pickled-egg eating oaf, there’s a kind, sensitive, modern man screaming to get out and mince about a bit. I remember getting severe stick from my city mates when I wore a red ribbon pin badge for world AIDS day, and got accused of being either a “faggot” or a “poof-lover”. Well, what would you expect from that lot? But I’m surely above that, aren’t I? I sure am. Perhaps it was just that on the two occasions above I was taken by surprise ? Or maybe it is just what we’ve discussed: that no man feels safe with his penis al fresco? I’ve been mulling over this all week, about how stupid my immediate reaction was, and how I shall make every effort to change.

Dan was in the pub last night again (hiding behind three Mancunians). I didn’t spot him until he was standing right next next to me, when I turned to be almost nose-to-nose with him. “Hello mate, alright?” he asked.
I blushed “Yes mate…great… thanks”. I left for another pub. I have a new friend and I’m being an arse about it. What a wanker.