Hats off again to Constable Savage. That’s one less defenceless newspaper vendor we need to worry about. As reported by The Guardian this morning a copper, in a move which they call at Hendon “The Belgrano Manoeuvre”, carried out a complete surprise attack with devastating effect on a slow-moving, ageing man, peacefully walking in the opposite direction. Thank Christ England scrum-halves aren’t armed with truncheons or who knows what damage Danny Care would do on the field of play? Savage will doubtless be given the key to the tea-urn back at the station house and a free go on the Taser. Sadly the kin of the victim, Ian Tomlinson, will be more concerned with a different sort of urn. Well done the lads at The Grauniad. Doubtless there’ll be a full and frank internal police investigation.

Charing Cross, sir? Of course, sir: Down the road, second on the left.

There was a lot of bloodshed that day, most of it none-too-serious, though worrying none-the-less. But the cameras did pick up on a protester who’d had his teeth knocked out by the Police. It’s a good thing the lovely Clare Balding wasn’t commentating on the demos— she’d have told the poor guy he looked much better. The perfectly-formed Clare (perfectly-formed, that is, if you like your women to look like Colin Montgomery‘s big sister) suggested on live tv that winning jockey of last weekend’s Grand National, Liam Treadwell, could now afford to get his dodgy teeth fixed. She has since apologised saying she meant no offence. Well nor do I when I say this: Fuck off you fat, charmless, Thelwell, drag-act.

Now then, where was I ? Ah yes. Incidents like the above are, of course, keeping the already-stretched NHS on its toes. Imagine therefore my joy when I heard that Johnny Taxpayer is forking out 40 million quid a year to keep our hospitals staffed with chaplains. No, not silent movie actors, but priests. It’s deemed a worthy use of our cash to employ Vicars, Vergers, Rabbis etc so that, in our hour of need, we can repent/confess/convert to a man of the cloth. Wonderful. I wouldn’t want that cash to be spent on nurses or cleaners, Oh No! Let’s have a chorus of Morning Has Broken while I’m on my last legs. The Right Rev who was interviewed by the BBC stated that at his hospital they had at their disposal Catholics, Anglicans, Sikhs, Muslems and Buddah-knows-what-else in case of a religious emergency, and all on my Nat Insurance Stamp. I have in the past screamed out to the Greater Being during the more probing of examinations, but I don’t need to pay for someone to hold my hand and rattle his rosaries while its happening. I’d rather fork out for someone to knock out the doctor who’s got his finger up my arse. 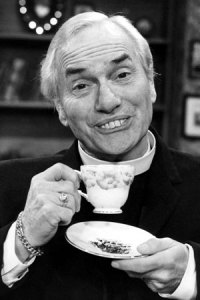 What do these blokes do while waiting to go into action? Is there a room where they sit and wait for it to all kick-off? Do they play cards or darts together til the alarm sounds like in Thunderbirds? The eyes in a photo of Vishnu on the wall start flashing and a Hindu Holy man leaps into action, scrubs up and off to the isolation ward?
Whoyagonnacall ? DEVIL DODGERS!!

All of this leads me to news of the world’s first face-and-hand transplant—on a burns victim, as it happens. Anyone who has suffered the misery of sitting through John Travolta’s Face Off will realise not only how complicated this operation is, but also how truly awful the subsequent movie will be. Will Nick Cage ever make a decent flick again? I doubt it. But there’s something oddly enticing about a face transplant (especially if you don’t have to endure first-degree burns to qualify for one). Can you choose what, or rather who you want to look like? Now that Monty’s face has been stolen by a horse in jodhpurs (see above), and given that not all operations are a success (Andrew Lloyd Webber’s face was put on inside-out) I wonder if I could apply to look like either Hugh Grant or The Daily Lama? I’d like to hear what a South London accent coming out of their faces would be like. And while we’re at it can I get even smaller hands than I have now? There’re hidden advantages to having small hands. For starters, certain things look bigger when you hold them with small hands.