Isn’t it always the same? Your wardrobe is full of fine clothes but you still haven’t a clue what to wear. I mean, what DOES one wear to a riot? Knacker of the Yard suggests the merchant bankers among us should refrain from donning the pin-stripes tomorrow, lest Swampy takes offence and goes berserk as you alight at Cannon Street. This is all very worrying. I have, on occasion, had a pot of tea with chums in the square mile, and I can’t honestly remember the last time I saw any of them in a suit. It’s all changed from the Gordon Gecko days, I can tell you. Time was in the 80’s if anyone (me) walked into a bar in the city in anything less than a Hugo Boss he’d be met with howls of derision. Nowadays yer broker wears chinos and mocassins rather than sharktooths and tiepins. The level abuse is just the same though. 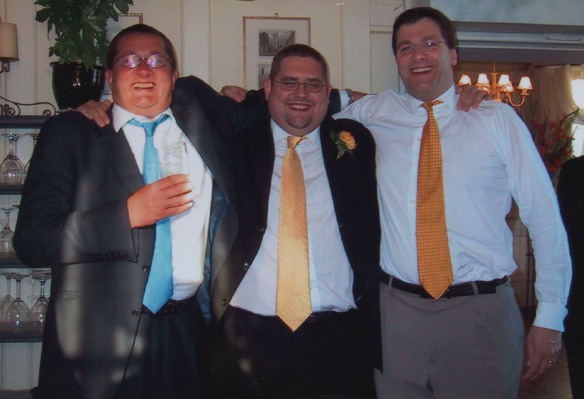 Ever-the-one to keep my finger on the pulse, just when the barrow boys were shedding their threads, I was venturing into the world of permanent suitage. I used to throw on a suit for work every now and then—usually when Black Dog was nipping round my ankles more than usual that day. My theory was that people would think I was going for an interview and therefore treat me better at work and/or give me more money. It never worked. Mind you, the theory was pretty solid: there was once a Daily Mirror photographer who regularly spread the rumour that he was being courted by The Sun, which led to a succession of gullible editors giving him a pay rise every six months. He came from the Land of the Shiny Suit, earned a fortune and drove a Rolls, chauffeured by an YTS kid. That’s what I aspired to (well, not the shiny suit) but my pathetic attempts to get my guvnors to drown me in extra dollars came to nothing. (An aside: there was once a particularly painful correspondent from a district office of a London national newspaper, again from Shiny Suit Land, who was dubbed by his colleagues the “Shite in Whining Armour”).

But it did teach me the power of a Whistle and Flute. You feel better in a suit. You do, I tell ya. You walk taller, bolder and more confidently. If you look like me (like a robber, rather than a robbee) it stops coppers staring at you for quite so long or people changing train compartments when you board. And, of course, you get served quicker in a boozer. You just do, and that’s a fact.

So, even given that I look like a bloke with a head transplant, five or six years ago I began wearing a suit to work daily. I’m the only bloke in the office that does, and that’s ok. It took my colleagues a while to get used to it, but it’s sorta taken as a given now. It doesn’t matter any more whether I’m going down the local, out for dinner or going for an interview. No-one ever knows. They have to guess (and they usually guess right).

My suits have a strict ranking: No.1s for special occasions, (cocktail evenings etc); No.2s :every day suits (generic pub-wear); No.3s: drinking heavily suits (Black Dog days). The order is worked out by the criteria of smartness, age and stain-resistant qualities. It is, of course, not unusual that I’m wearing my No.1s when I unexpectedly find myself drinking heavily. On such occasions I just do the best I can and call into Sketchleys in the morning. 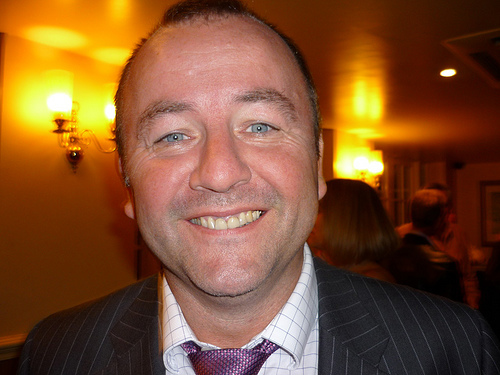 The Author trying to turn No.1s into No.3s

For less than 200 of your English Pounds (about 7 Euros) you can pop into Marks, or Millets or wherever you choose and deck yerself out in something that your dad would be proud of. AND it saves your T-shirts for the weekend. Simples.
So my advice to you tomorrow is Suit-Up so you won’t look like a banker and , as it’s a special occasion, put yer No.1s on.