Gordon Brown (texture like sun) will have plenty to watch when he finally gets the push, thanks to his trip to visit his new mate, President Obama. GB gives BO an ornamental pen holder and a First Edition, BO returns the favour with a DVD box-set of “Classic” American movies. Wowee!! Ever turned up to a party with a pallet of Stella and a case of poo, then the host shoves them under the stairs and hands you a warm can of Kestrel? Seems like the Special Relationship is going through a bad patch. That’ll teach Gordon to back Hillary for the Presidency. It was a fair call at the time. Downing Street hadn’t expected her to Devon Lock up the home straight. Oh well, let’s hope Brown enjoys X-Men. Cos I suspect he’s about to become one.
It just goes to show you how important relationships are. Brown obviously thinks so. My buttocks have yet to unclench themselves after having watched Gordon whore himself in front of the Senate this week.
Perhaps Gordon will have to chummy up to Europe instead. It shouldn’t be so hard. He and Angela Merkel seem to share the same blind tailor, and he and Sarkozy are both nervous, twitchy types. Gordon gets over it by biting his nails down to his elbows, Sarko by drinking his own body-weight in alcohol. There’s something quite appealing about the blossoming relationship between a fat, bumbling, British oaf and a rather classy, attractive, French pissoir-artiste. 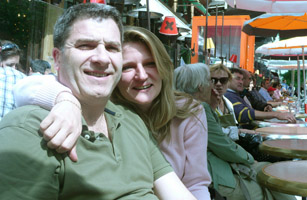 3 thoughts on “That Special Relationship”