What a week we’ve had? The shenannegans of F1 continue on the track and in the courts, climaxing with Ron Dennis jumping overboard to save the McLaren team from further punishment over Liargate. The Diffusergate inquiry found in favour of Eva Brawn’s mob and a bloke called Jenson (a fine old English name) still leads the championship. Any day soon the back pages will be full of something called Racegate or even Interestinggate when a Grand Prix is actually more enjoyable AFTER the race starts. What a farce it all is? I’ve actually seen grown men leave a pub to go home on a Sunday afternoon to watch the latest parade from the Nurburgring or Monza. LEAVE A PUB. Honest. 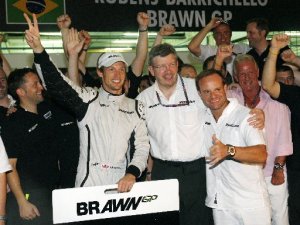 Hands up who's bored with F1?

Meanwhile, in the world of sport, David Dunne was sent off for the third time this season as Man City bid a fond adieu to Europe. Dunne, desribed to me this morning as a “Sunday Morning Lummox”, has the turning speed of your average oil tanker. It’d be no surprise to this reporter if at City’s next home match Somali Pirates were spotted sitting behind the goal, waiting to board him.
Terrific news from Seth Efrica that Andrew Flintoff ISNT playing in the IPL for the money. No, no. He’s playing to hone his 20-20 skills for the upcoming World Cup. Thank heavens for that, then. I guess there’s the added attraction of the probability of him getting injured so he can sit out the poorly-paid Ashes series. On the other hand if Freddie can get hold of the Aussies that are down there and take them out for “just the one” of an evening, maybe we still stand a chance against them, as they won’t have sobered up by July. Our reader with Setanta has promised to keep me up-to-date with the scores from the IPL, not that I give a monkeys.

Gonna be good n hot down there, under the lights. Having played a lot of cricket abroad (albeit to a rather lower standard) I can vouch for the complete shock of playing in a very hot climate and what it does to your system. My military-medium-pacers have been spanked over boundaries from Adelaide to Antigua and I’ve always been able to blame the heat or the altitude for my complete lack of competence with ball-in-hand. On one occasion in Nairobi (5889 ft above sea level) I wobbled and waddled to my mark at the end of my run up before delivering the fourth ball of my spell, when with sweat-filled eyes and a thumping head, I turned and started charging (sic) towards the square leg umpire before collapsing in a heap. “Take a blow, Bealers” came the exasperated voice of the skipper. At least they didn’t score a boundary of that delivery. In Mombassa I didn’t even manage to bowl a single ball as an excruciating pain shot up my left leg after I’d taken but three strides towards the wicket. The doctor said it was cramp, but I’m pretty sure it was cobra-bite. 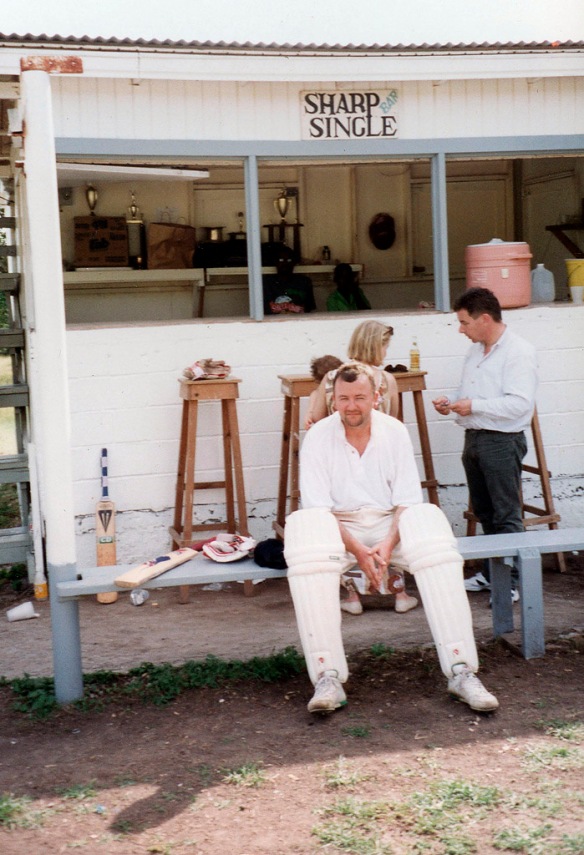 A rabbit by his hutch

Anyway, never ever again will I throw beer cans at the TV as I watch the English tourists falter and collapse against the Indians/Pakistanis/Sri Lankans as I fully understand how harsh foreign conditions can be on us Poms (playing in Colombo was like playing in a wok). I would, however have donated my left testicle to watch last night’s World Cup Qualifying match between Scotland and Afghanistan, where the Afghans romped home by 42 runs. Played in Benoni, Sef Efrica (presumably the Kabul Oval is undergoing a refurb?), the Scotch were chasing 280 to win but lost their last 8 wickets for 50 runs. Now I know a lot of you will be surprised that Scotland play cricket (it’s staggering popular in the gorbals), but how much fun do you reckon you’d have playing a match in-between US bombing raids in Helmand Province?? I reckon your opening bat may lose concentration every-so-often, deep backward square regularly gets kidnapped before tea, and there’s a land-mine just on a length outside off-stump. I suspect there’s a few short legs around, but that’s another story.

*Arabic for “How was that?”